System can make greenhouse energy self sufficient for 90%:

Using a special lens to magnify the light in order to harness the sun's energy, Sika Energy's system has the potential to cover up to 90 percent of a greenhouse's heating needs. The Fresnel lenses, which concentrate energy from the sun into a focal point, heat water inside a pipe to a high temperature. The heated water is then transferred to a reservoir tank that growers can use to heat the greenhouse during the day and throughout the night. 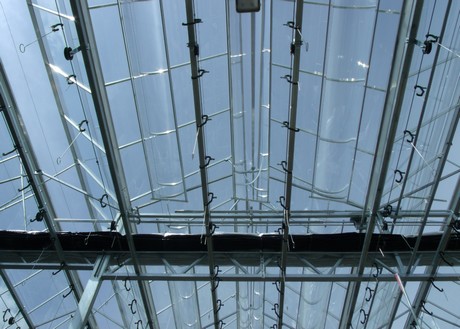 “The system can heat water up to 90 degrees Celsius,” said Sika Energy's Cees Kattenberg. That temperature can be achieved because of the type of lenses Sika uses. In early trials, Kattenberg explained, more typical lenses were used, but they were bulky, expensive and couldn't generate enough heat to justify their drawbacks. They turned to Fresnel lenses, which are lighter and generate more power because they concentrate the sun's rays into a single point.

“The lenses we use are basically magnifying glasses,” said Kattenberg. “They burn in a line.” Further boosting the energy captured from the sun, the lenses rotate from East to West, following the path of the sun, and the pipes full of water on which the lenses are mounted rise and fall with the position of the sun in the sky. Kattenberg noted that they continue to run trials with the system, and an upcoming project has given them the opportunity to experiment with new features.

“We're working on a project that will have a bay that's over 100 meters long, and it will have nine lenses,” said Kattenberg. It will be Sika's first commercial project, and it will be installed in a bedding plant nursery. Future trials will include lenses that are twice as large that have the potential to heat the water in the system up to 180 degrees Celsius. 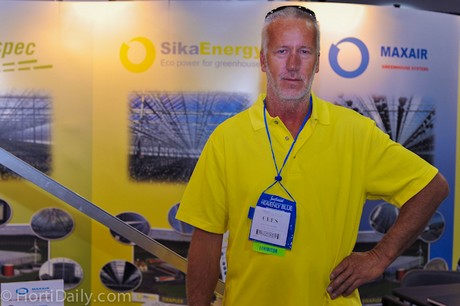 Cees Kattenberg at the 2013 OFA Short Course in Columbus, OH.

Kattenberg touted the cost-efficient nature of the system, noting that the cost to set up the system is a fraction of that of other solar energy systems. The lower investment for a big energy payoff is what makes the system so attractive. “The good thing about the system is that it works anywhere there's sun, even when it's cold out,” said Kattenberg. “As long as the sun shines, we can get energy.”