Inspired by Vertical Harvest in Jackson Hole, a group of Pennsylvania entrepreneurs has announced an ambitious plan to realize a similar community-supporting vertical glasshouse downtown Lancaster. By partnering with their industry peers in Wyoming, the group soon hopes to break ground for the construction of the 60,000 square feet project on the side of an existing parking garage. 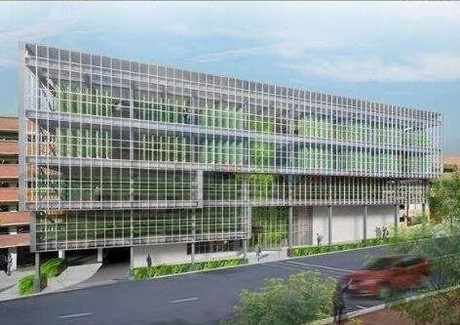 The Lancaster Urban Farming Initiative was founded by a group of entrepreneurs with a shared social ambition to re-develop underutilized infrastructure with urban farming projects to bring in jobs, gain availability of local produce and provide beautification of the downtown area.
Soon after they started their in-depth analysis of opportunities and locations, Lancaster mayor Rick Gray got acquainted with their initiative and composed the idea for a vertical farm at the local Prince Street Garage, along Orange Street. "He showed us a picture of the Vertical Harvest greenhouse in Jackson Hole and asked us if we could do the same. And a few years later here we are, about to complete our feasibility study for a similar farm and design, only three to four times larger in size", representatives of the initiative said.
The project will be built onto the side of the garage, using a space that really cannot be used for anything else. The walk faces the famous Lancaster Central Market which is the oldest continually operating Market in America. It is the heart of the city and walking out, visitors will soon see an impressive vertical greenhouse rather than a brick wall.
Vertical Harvest will partner in the non-profit Lancaster vertical farm that is touted as bringing in jobs to mentally underdeveloped and disadvantaged and disabled people, as well as veterans, people with Down syndrome, autism or those who are unemployed or underemployed. "We want to provide them with a rewarding job in high tech agriculture. We will also create partnerships with local hospitals and industries to support the local community and its access to local, healthy food."
Aside from providing jobs, local food and making underdeveloped parts of the downtown area walkable again, the Farming Initiative also hopes to sprout the development of indoor agriculture in general by becoming a technology leader. Their facilities will grow a variety of crops in several production systems. It will serve as a dedicated testing space to trial new innovative vertical growing systems. The group said it will incorporate the latest in hydroponic and LED systems, and might even consider bringing in cogeneration to supply the greenhouse with a sustainable energy source.
The Lancaster Urban Farming Initiative is currently in the process of completing funding. Up next is going through the design phase, which is expected to take a while, since building a vertical greenhouse is also a challenge in terms of strict building codes and complex architecture. Nonetheless, the group hopes to kick off the construction early to mid 2018.
Follow the development at www.lancasterufi.org and www.facebook.com/lancasterufi
The Lancaster Urban Farming Initiative Board of Directors: