Canada: The importance of educating kids on indoor ag

"Most people don't know much about vertical farming, which can lead to a lack of understanding of the benefits and risks associated with vertical farms and therefore causes resistance to adoption. Education is essential in order for Little Greenhouse That Could to be successful in creating its vision," elaborates Trina Semenchuk, Founder and CEO of Little Greenhouse That Could.

Little Greenhouse That Could (LGTC) is a company with a vision to turn Winnipeg into the vertical farming city of the world. The company sells indoor growing systems (Nullam countertop units and Harvest Today growing walls) and provides educational workshops in order to teach people how to grow to produce indoors. 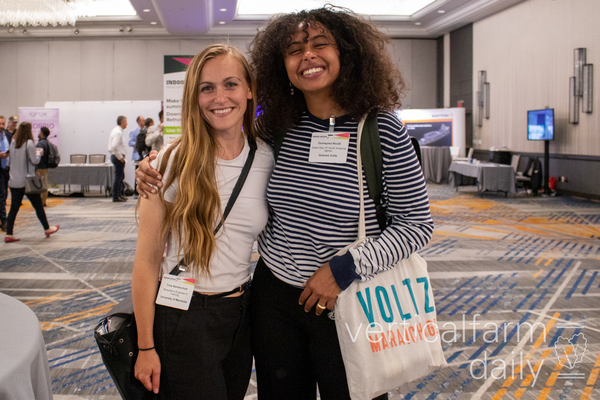 Trina Semenchuk pictured (left) at the Indoor AgTech 2022, together with Oumayma Nouib with Voltz Maraîchage

"We're currently targeting K-12 (from kindergarten to 12th-grade students) public schools because youth are our future. We're in the process of tailoring our education workshops to different age groups. However, each session includes information about how plant growth responds to controlled environment conditions," Trina shares.

LGTC intents to always start its workshops with its vision: what Winnipeg would look like as the vertical farming city of the world. Trina hopes that the initiative will help inspire LGTC's audience and keep kids engaged with agriculture. 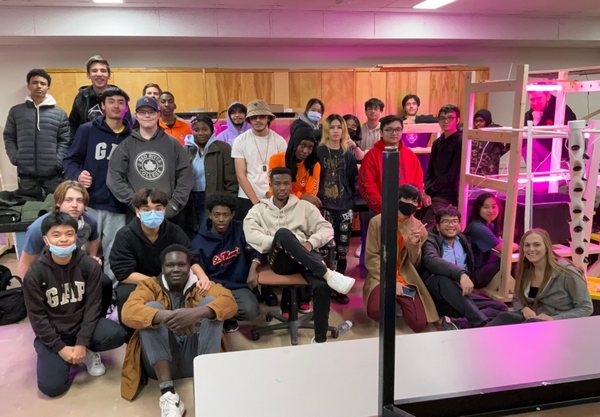 Teaching kids to build their own growing systems
Being an Engineer in training at the University of Manitoba, Trina also volunteers at St. John's high school in the pre-engineering classroom as a pro-bono initiative. In collaboration with two teachers (Danny Birley and Thomas Murphy), they taught kids how to design and build their own indoor growing systems.

As Trina explains, all of the fresh produce grown from these systems are used for the school's community food hamper. This was such a successful and rewarding project as the St. John's kids were very engaged during the process. Many of them learned how to use tools for the first time, and almost all the groups had to learn how to improvise in order to get their systems to work. "I'm very proud of them, even though one group said they wouldn't work on vertical farming projects again because they're too hard. But hopefully, they'll always keep it in mind," she adds. 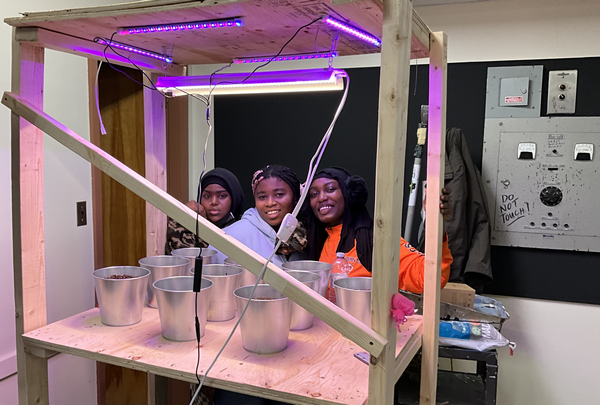 Trina's mission for 2023 is to start building the marketplace in Winnipeg for vertical farming using education as a tool. Over the next year, she's hoping to get into at least 50 public schools in Winnipeg with my workshops.

Additionally, Trina aims to eventually expand her target customers to include families and institutions by partnering with community centers and local businesses. "It is important to educate adults as well as youth about vertical farming because we need people to understand the role it can play in building a resilient food system in order to get funding for future vertical farms."

Manitoba as the big vertical farm city
"I think many people agree (myself included) that vertical farming will play a role in creating a sustainable food system and co-exist with traditional agriculture. However, there are a variety of reasons why I think Winnipeg is the perfect place to become the capital of vertical farming. For starters, our average frost-free growing season is only 120 days," Trina adds.

Secondly, Trina goes, Manitoba has the perfect size to be a proof-of-concept city. With a population of approximately 833,000, it's commonly known as a big small town. This means two things: one, that this city can really demonstrate and validate the different roles vertical farms can have in an agricultural system. Then two, everyone here has a lot of city pride (go jets, go)!

"People are really connected here, so all we need to do is get enough excitement generated in the city, and it's a snowball that will definitely roll. Lastly, it's the perfect city because it's my city, and I love it, and I want to make it better. If we have more vertical farms in our city, we can localize our food supply, provide jobs to people who need them, and combat our nature deficit disorder in the winter."

As Trina sees it, indoor-ag is starting to become more popular in Canada, and more opportunities are becoming available each year. Just recently, Trina was on a team who applied for funding from the Home Grown Innovation Challenge. An initiative that is awarding funding to groups in Canada that can design and build a system that extends the growing season of berries.

Open for hiring
Trina adds, "Little Greenhouse That Could is a small company with a big vision, and it's going to take a lot of partnerships to pull it off. Although we're starting with education further down the line, people will need help with engineering design and business development. I'd like to start building this skill set of mine, so if any companies are looking to hire an eager EIT, please let me know. I have a lot to learn."