The Dutch fruit and vegetable trade sector had a particularly demanding 2022. Early in the year, the lockdown made things difficult for food service fruit and vegetable suppliers. Add geopolitical shifts, the energy crisis, and labor market uncertainty, and the challenge was complete, reports GroentenFruit Huis. Nevertheless, last year, fruit and vegetable export values rose by two percent to €13.6 billion. That confirms this sector's strong role.

Fresh vegetable exports were valued at four percent more, and fresh fruit at one percent more. That was partly due to higher prices. In kilograms, the volume of fresh fruits and vegetables exported decreased slightly by one percent. Export refers mainly to sales to the Netherlands' neighboring countries. 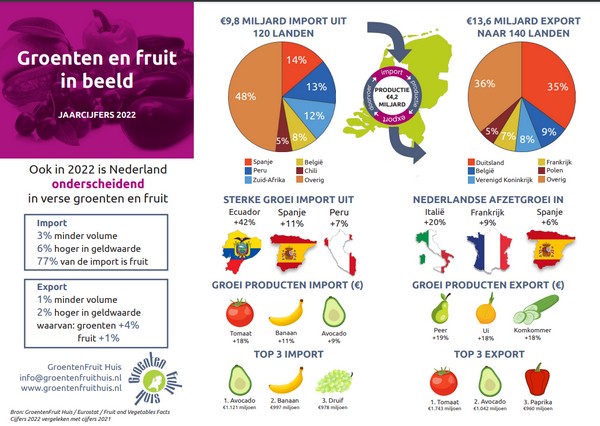 In 2022, with a total value of €4.8 billion, Germany remained, by far, the Netherlands' top sales market. Less (-6%) fruit and vegetables were sold at a lower value (-4%) than a year ago. Germany buying fewer tomatoes and cucumbers is to blame. By late 2021, energy costs were already so high that Dutch growers decided to plant later. There was, thus, a lower supply than in 2021, especially in 2022's first quarter.

Last year, Belgium (€1.2 billion) and the United Kingdom (€1.11 billion) bought about the same amount from fruit and vegetable traders in the Netherlands as a year before. Sales to the Southern European countries of France (+9%), Italy (+20%), and Spain (+6%) grew. France mainly bought more bananas and avocados, i.e., re-exports. The Italians took more Dutch tomatoes, among others, especially from June.

Since several of that country's pear crops failed in 2021 due to frost, there was also more demand for these. These are two products Italy, incidentally, cultivates plenty of itself. In Spain, tomatoes, onions, and bananas were in greater demand. The notable exports of tomatoes to Italy and Spain coincided with those two countries experiencing high temperatures and droughts.

Monetary value-wise, tomatoes, avocadoes, and bell peppers were the top three export products. All three's export value was slightly lower than in 2021, while other products' sales actually increased. These are onions (+18%), cucumber (+18%), pears (+19%), and bananas (+14%).

In 2002, in the Netherlands, companies imported fruit and vegetables to a total value of €9.8 billion - six percent up from 2021. The volume, though, fell by three percent. Spain leads the list of source countries with a 14% share, followed by Peru (13%) and South Africa (12%).

In the past year, Peruvian imports amounted to over €1.2 billion. In 2017, that was still €500 million. This mainly concerns avocadoes, blueberries, and mangoes. Ecuador is also gaining ground, mainly with bananas. The Netherlands imported more than 40% more fruit from Ecuador last year.