At a Dutch potted plant grower this year, after a year of testing, systems were installed in all return water basins to aerate the return water. It involves JVR Tecmar's Vital Oxidizer. "It is basically a small water purifier that rids the water of organic contaminants," says John van Ruyven, the owner of the company developing the systems. The systems are now running worldwide. "We have five years of experience in all kinds of crops." 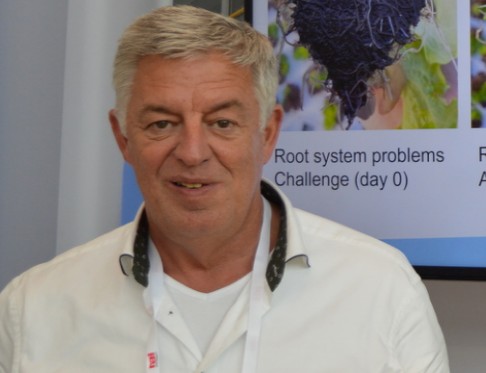 The main purpose of the system is to provide oxygen to the root system. "We can measure water quality through a number of parameters," says John. These include redox potential (mV), chlorophyll fluorescence algae (mg/ltr), UV fluorescence (bacteria and organic matter), oxygen (mg/ltr), oxygen consumption (mg/ltr/hour) EC and Ph. "Together, this gives the water quality."

Bacteria, algae, fungi, and yeasts can flourish abundantly in a nursery's water system. Depending on the presence of salts, organic matter, heat, and residence time, among others, the oxygen content in the water is reduced by the oxygen consumption of these algae and organic matter.

This creates an anoxic situation that is unfavorable for the roots of the plants, the technician explains. "Instead, it creates a favorable environment for pathogens to grow rampantly."

Pipeline with (left) and without contamination (right)

Measuring water
In the beginning, growers will have to keep an extra close eye on their pipes depending on the amount of fouling in the system. Through spraying the dirt, blockages in the system can be prevented, as John points out. "The breeding ground for the pathogens will then be broken down, which will also bring down the pathogen rate. Organic contamination can be measured by a redox meter or with a nitrite test. If the nitrite level is 0 mg/ltr, all algae have broken down."

The amount of pathogens can be measured by having a DNA scan of the water or substrate. "Practice shows that products such as chlorine or related products and hydrogen peroxide and ozone are no longer needed," states John, who has already run the systems at growers in the Netherlands, Belgium, and internationally in North America, Australia, and elsewhere in Europe, among others.