“No worries about accumulating sodium concentrations”

The Van Dijk heating SOREM sodium removal unit is ready for practical use. That is the conclusion after an eight-month trial at the 12-hectare sweet pepper nursery Midberg in Harmelen, the Netherlands. For his water supply, grower Ron van der Knaap is completely dependent on spring water, which contains 0.5 mmol/l sodium. "The sodium concentration in the drain water has not gone above 4 mmol/liter. That is very good."

A ban on discharging water containing nitrogen and phosphate components comes into effect in Europe on 1 January 2027. Growers will be required to keep their water systems closed and to keep reusing the drain water (after disinfection). However, constantly reusing drain water increases sodium concentrations as this element is barely absorbed by the crops grown. Too high concentrations cause reduced growth and loss of yields, so residual water still has to be discharged with some regularity to restore water quality.

Sodium-containing spring water
Van der Knaap exclusively uses spring water, which he pumps up from a large, high-quality aquifer below his nursery. It contains approximately 0.5 mmol/liter of sodium. Not a lot, but enough to be able to track how the SOREM sodium removal unit operates in such a situation over a long period of time. "Our water system is completely closed," the grower says. "During the growing season, the sodium concentration gradually rises to 5.5-6 mmol/liter towards the end of the crop. That is acceptable, so we never have to discharge, and we can reuse 100% of our drain water after disinfection. But as far as sodium is concerned, the lower the concentration, the better. When Joek van Zeeuw asked us whether we wanted to test their SOREM sodium removal unit at our nursery, I was more than happy to do so." 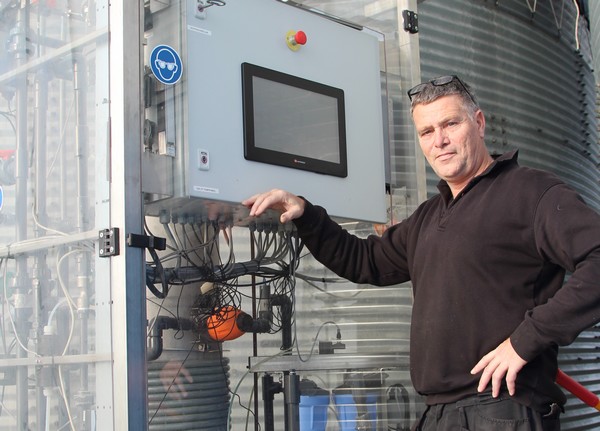 Up to 60 Mol per 24 hours
Van Dijk heating installed a SOREM sodium removal unit at the Midberg nursery in March 2022. It takes in dirty drain water over 1.5-2 hours and leads it over a porous resin column, charging it with cations. When fully charged, several rinses with specific additives first remove the sodium and then the other, more strongly bound cations from the resin column. With a total processing time of 8 hours per batch of 2.5 m3 dirty drain water, up to 3 batches can be processed every 24 hours. The sodium solutions (several liters each time) are discharged into the sewer, while the other water (containing all the valuable fertilizers) is returned to the silo for reuse.

Successful pilot
"The maximum quantity of sodium the unit can remove in 24 hours is around 60 Mol," says Van Dijk heating R&D specialist Bart van den Berg. "As long as no more sodium is introduced into the system via the input water and fertilizers in any one 24-hour period, the concentration in the irrigation water will remain the same or even drop. In addition, the SOREM does not need to be running continuously as long as the sodium concentration in the irrigation water remains below the threshold value for the crop concerned."

At Van der Knaap, the concentration did not exceed 4 mmol/liter, and the grower is happy with that. "The numbers show that the SOREM is working. To begin with, Bart did a lot of work on it to make improvements, so it definitely did not stay on all the time. I am looking forward to seeing what happens next season. My feeling is that the sodium concentration will stay even lower because the teething problems have been fixed, and the unit can carry out more treatments. I don't need one of these units immediately, but it also doesn't cause me any trouble. So I would be happy to remain available as a pilot company. I know enough colleagues who have to take in lower-quality water; it could be a good solution for them."

Capacity doubled
The Van Dijk heating team is happy with the results of the first year of practical use but is already looking further ahead. Ton van Dijk: "Besides proof of concept, we have also delivered proof of practice now. The SOREM removes sodium selectively, and we can see great potential for this system worldwide. It can save a lot of water and fertilizers and reduces pressure on the environment. We are also working on a larger version with a capacity of at least 120 Mol sodium removal per 24 hours. It will be launched in spring 2023."

How the SOREM sodium removal unit works
The SOREM sodium removal unit works on the basis of ion exchange using a resin column and additives (nitric acid, caustic potash, and CO2). The open structure gives the resin column a large active surface, which binds a lot of sodium. As soon as the saturation point is reached, the resin column is "discharged" in two separate process stages. The concentrated sodium solution contains no nitrogen or phosphate components and is drained into the sewer. Most of the additives remain behind in the system, where they make a second contribution as a nutrient component in the form of potassium nitrate. This means that the net use of additives is extremely low.