“It’s always good to learn new things. The way we grow has changed quite a lot over the years.”

This June, a small international group of dynamic growers of high-wire crops met at the GreenTech trade fair in Amsterdam, the Netherlands, to take part in the Plant Empowerment Summer School. The growers came from various countries, including Greece, Mexico, and Georgia.

During this five-day masterclass, which participants can attend only on invitation, the group attended several in-depth lectures by the Plant Empowerment implementation partners, drew inspiration from the displays and stands at the GreenTech and Floriade trade shows, and visited several pioneering growers. During the Summer School, the international group of growers were prepared to achieve optimum results using minimum resources. After their action-packed days, they swapped notes while seeing some of the sights of Amsterdam and its surrounding areas.

A broader view on how to grow
While invaluable knowledge is passed down from generation to generation, experienced growers like Breugem are aware that technological advances are continually being introduced to commercial horticulture production.

“It’s always good to learn new things. The way we grow has changed quite a lot over the years.”

“With that in mind, I would definitely recommend the Summer School to other growers. The training course did give me a broader view on how to grow. It is also good to get in touch with growers around the world to discuss growing principles and not just stay in your own circle.”

The future of growing
Breugem heard about the masterclass through Plant Empowerment implementation partner Hortilux Schréder, which supplied Thanet Earth tomatoes with some of the 24 hectares of LED lights that were installed there in 2021.

One of the Summer School trips away from the classroom included a visit to the innovative vine tomato producer Schenkeveld Schiphol in Rijsenhout. The complex boasts four greenhouses, with the most recent structure completed in June 2022. Equipped with the latest technologies – including a second climate screen – to provide optimal growing conditions for the crop, the facility was an inspiration to Breugem.

Breugem’s decision to invest in a second climate screen followed the installation, in 2021, of the energy-saving LED lights that replaced half of the original SON-T HPS [high-pressure sodium] lights in each of Thanet Earth’s three tomato greenhouses. 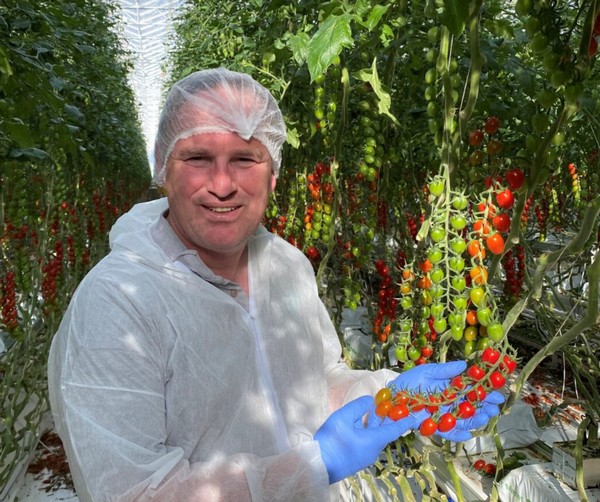 He recalls: “We had the choice to either renovate the SON-T lights or go for something new. We decided to install LEDs because, although the technology is not crystallized that much, in my eyes, it’s the future. To grow sustainably, we have to save energy – we cannot go on as we always have. With SON-T lights, our energy input was huge.”

A different way of growing
However, once the LEDs were in place, Addy and his colleagues observed that some of the fruits were weak and splitting. Furthermore, the leaves were deficient in nutrients, including calcium and boron. “After we’d invested in LED lights, I could see that it was a different way of growing. The plants reacted differently. I’d expected something slightly more.”

Because LEDs emit less heat radiation than HPS lights, the plants were losing heat towards the cold glasshouse roof when the black-out screens were opened in the morning. The crop then became colder than the air temperature, which meant that it was unable to evaporate. This created condensation on the plants’ parts – rendering them unable to properly absorb nutrients and leaving them susceptible to plant diseases.