Mythronics has already been active for a while in the field of AI-driven robotics and has made yet another step in the right direction with the introduction of their latest scouting robot, Skout.

Much like its predecessor, Skout is equipped with multiple sensors in order to scan for disease and ripeness of crops in the greenhouse. The robot is driven autonomously and creates a heat map of the greenhouse on the plant level using its sensors. In doing so, it can detect diseased plants, which is especially useful in tomato cultivation, given the severity of ToBRFV nowadays.

Skout in action
Many things have changed over the year. The spread of disease is a prevalent problem in greenhouses resulting in the loss of yield and, ultimately, profit. Currently, greenhouses detect disease manually, using individual persons to monitor the crop, which has proven to be unreliable and invites unnecessary risk of further contamination. 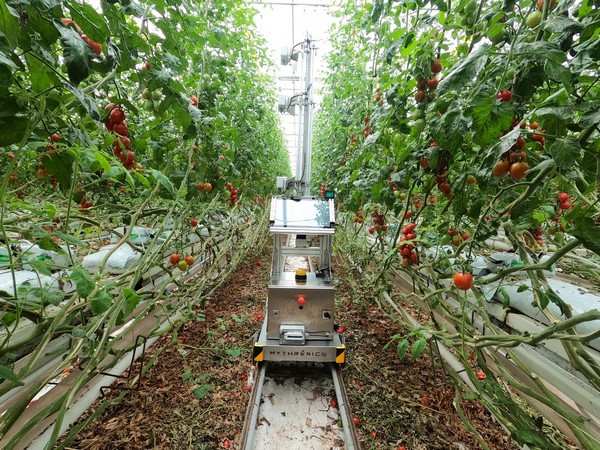 Soheil Jahanshahi from Mythronics puts it like this; “what we offer the growers is a way to reduce the manual labor. One robot can cover around 3 hectares meaning it can reduce the work of up to two people a day while also saving a lot of crops by detecting the diseases earlier, besides that, it also brings consistency in quality monitoring.”

Skout drives around the greenhouses searching for infected areas, mapping it out as it goes. With its heat mapping, it can detect early diseases better than most humans, as well as when the crops are ready for harvest. With its AI, computer vision, and 3D camera, the robot makes a digital data set of the greenhouse. When the robot spots something, a notification is pushed to the mobile or online dashboard to inform the grower. They also receive a weekly heatmap and alert on the dashboard, which will let them know how much kilograms they can harvest and which areas can cause problems in the greenhouse, so they can better track the entire process and make decisions based on all the information provided to them.

The future
But Mythronics still has more in store in terms of AI-driven robotics and is currently testing the harvest module for the robot. “Our focus now is on autonomous navigation, disease detection, and yield prediction. We want to develop the harvest module by the end of 2023. However, there is still a lot of complexity involved when it comes to making the robot faster than a human. It’s an extensive and slow project, but by no means unachievable. Right now, we mainly focus on developing our software and reducing the hardware costs by changing parts of the arm,” says Soheil. 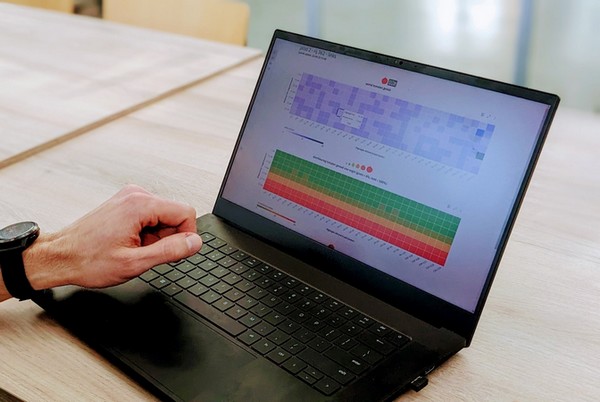 “If the robot can also harvest, you’d hardly have to go into the greenhouse anymore, which is basically the goal. To make an autopilot for the greenhouse grower. They won’t have to rely on the skills of a certain person in their team and can instead use the AI to grow a stable production year-round. After all, if a skilled person would do it, that expertise will always stay with that person, so you’d be reliant on them. But the data gives you analyzed information without you having to worry that the knowledge will ever be lost.”

Growers are now becoming more familiar with the technology, with Mythronics already having a few pre-orders. However, the adoption rate is still slow.

“We are, however, optimistic about this year because this season brings a lot of challenges to grow more tomatoes, with lots of competition coming from Spain. The margins would be tighter, so AI would become very helpful. With our robot, a grower would manage to reduce 20 to 25% of their human-based operation costs.”