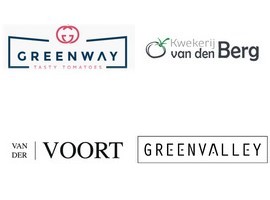 Dutch tomato growers Greenway, Greenvalley, Van der Voort, and Kwekerij van den Berg are joining forces and continuing under one name and as one company. The four companies and three families are merging to ensure a strong foundation for the future.

50 hectares
It is a new merger within the growers' association Prominent that fits into the series of mergers in recent years. Under the name Prominent 2.0, the name of the strategic plan they came out with in 2018, the member tomato growers sat down together to look at how they can still be competitive in the market in 10 years' time.

With a total area of 50 hectares spread across De Lier, Vierpolders, and 's-Gravenzande, they will make the best use of scale and cooperation from 2023 onwards. The growers have been working towards the announcement of the merger this year. "This summer, we already knew we were going to merge," said Jack Groenewegen, one of the four board members, in a comment Friday morning. "We have been working on this process for about a year and accelerated to complete it before Christmas. We thought that was a good time." 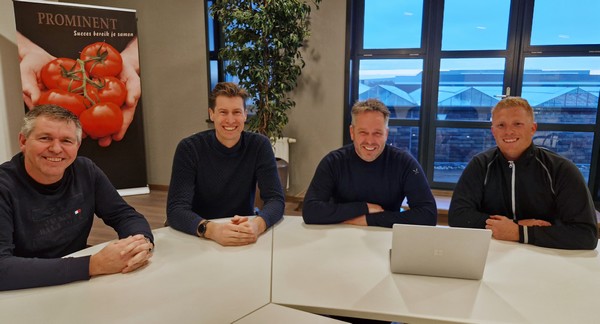 Organizational structure
By merging, the tomato and cucumber growers aim to create "a robust organization" in which "efficiency and professionalism increase," they share in a press release. It states, "By joining forces, the new company not only gets an energetic boost but (further) growth opportunities are suddenly within reach. This applies not only to the executives but also definitely to the employees."

In doing so, growers can rely on good company managers, among other things. The merged company has seven locations. "We want to keep those in the same composition as much as possible, only we are going to try to help each other and make improvements at each other," he says. Among other things, administration and management will be in one central location.

Alignment
The growers' current focus on tomatoes and cucumbers can be extended to other greenhouse vegetables in the future, the growers indicate in the press release.

Jack indicates that for next year, the growers have already coordinated a variety of choices together, among other things. All three tomato growers were already gaining experience with a cucumber crop. "We started it two years ago. We like it very much." Next year, the growers don't want to change too much. "We will first start as we were used to and, from there, see if things can be improved. We are not ruling out other greenhouse vegetables in the future."

New name
With a new company comes a new name; The Valley. A tip of the hat in terms of the company's new operations and core beliefs. "We provide a fertile ground to learn, share, grow and excel together. No growth without ambition, but no growth without freedom. If you give people space, they may just rise above themselves," the brand-new management said in the press release.

The four-member board, Jack Groenewegen, Joost, and Thom van der Voort, and Marcel van den Berg will use the coming period to refine the division of tasks, integrate the companies perfectly and optimize the processes. Through years of cooperation within Telersvereniging Prominent, Growers United, and bQurius, the gentlemen know each other through and through. Jack: "We have known each other for almost 30 years, actually since 1993, the beginning of Prominent. Our businesses and mutual visions complement each other well and are fertile ground for the future."

Yeald is responsible for guiding this merger process so far and will be involved in its implementation. A new logo for the merged company will come early next year.