Good results in a difficult environment

Not only were there many interesting facts about the 2021 financial year for the members at the general meeting of Reichenau-Gemüse eG and Raiffeisen-Lagerhaus eG in the Inselhalle, but also a commodity refund in the vegetable cooperative and dividends for the commodity cooperative. This meant that the chairman of the supervisory board, Egino Wehrle, could not only welcome many guests in these challenging times, but he could also see many satisfied faces.

Together with Raiffeisen-Lagerhaus, vegetable marketing saw a total turnover of almost € 70 million. This figure also emphasizes the economic importance of the cooperatives on the largest island in Lake Constance. 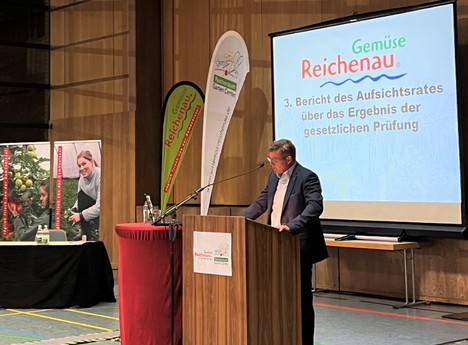 Egino Wehrle, Chairman of the Supervisory Board

Higher payout for growers
With a volume of almost 15,000 tons of fresh vegetables, a significantly higher grower disbursement performance was achieved, said the managing director of the cooperatives, Johannes Bliestle. This is mainly due to the commissioning of a new organic greenhouse facility in Singen/Beuren, with higher prices achieved for many products from Reichenau in 2021, the second year of the pandemic.

Of the total sales due to the first productive occupancy of the 4-hectare organic plant in Beuren, the importance of the market garden settlements for Reichenau vegetables in terms of sales has continued to change. In the meantime, 61 % of the total sales of Reichenau-Gemüse come from the locations Beuren, Aach, or Mühlingen. In the previous year, this figure was still 54 %.

There has been no change in the ratio between open field and greenhouse cultivation. At 95.2%, the focus lies on protected cultivation once again.

Organic continues to grow
Particularly significant, 47% of production by value now comes from organic production; in terms of volume, this is still 34% or 5,300 tons of organic vegetables. With this proportion of high-quality organic produce, produced in accordance with EU organic, Bioland, or Naturland guidelines, the cooperative is one of the outstanding organic production sites in Germany for protected vegetable cultivation.

The start of the 2021 vegetable season was marked by a good start to the greenhouse lettuce campaign with around 1.4 million butterhead lettuces. This was followed by around 6.6 million cucumbers from the vegetable island. With the 4.5 million organically produced cucumbers, the total production volume of fresh cucumbers stood at 11 million pieces. The cucumber range was completed with an additional 2.2 million mini cucumbers.

Eggplant production on the upswing
The total tonnage of tomatoes from the island is close to 1,000 tons. Completing the cooperative's total tomato production, there is an additional 2,300 tons of organic tomatoes of various varieties, sizes, and colors. One of the highlights, again, is the Inselperle, a medium-sized and very flavorful tomato.

Regarding fruit vegetables, there are more than 7 million peppers, the main product from the nursery in Singen/Beuren in the Hegau region. A considerable push has been made in the production of eggplants, reaching almost 2 million pieces in 2021. Interesting alternatives to the classic eggplant were tested in 2021; these will expand the eggplant range in years to come. These include the "Graffiti" eggplant and the elongated "Japan eggplant."

Pioneering investments in energy
The current "energy" topic is very much on the minds of the growers; it was addressed in a presentation by Managing Director Bliestle. In the two organic growers' communities in Aach and Mühlingen, there has already been a reliance on the waste heat from biogas plants from agricultural neighbors since the construction of the greenhouse facilities. In Singen/Beuren, the growers are currently in the process of replacing two existing natural gas-fired boilers with a CO2-neutral biomass boiler. The cooperative has been supporting the project. By using waste wood of category AI and AII, heat at the site will be generated almost completely CO2-neutral from 2024 onwards. The facility, adhering to the latest environmental standards, will be completed by the end of next year. The application for it was made before the Ukraine war and its resulting impacts on the energy market.

Today, against the background of pressing social challenges such as climate change and energy consumption, sustainability encompasses far more than environmental protection and resource conservation; it is an indispensable element of a successful cooperative, said Managing Director Johannes Bliestle in the Inselhalle.

Based on an energy analysis of the entire facility in 2020, more measures were already taken last year aimed at saving energy. After the conversion to energy-saving LED lighting in the empties hall and the hall extension in 2021, the entire outdoor area was also converted to low-energy LED lighting. This involves the use of light sources that are very insect-friendly as well.

A wide range of environmental measures has also been implemented in the associated production facilities. For example, solar panels have been installed on the roofs of the gardeners' estate in Aach and Mühlingen, and energy screens have been installed in greenhouses on the island of Reichenau. Nevertheless, further efforts will be necessary to minimize cost increases in the energy sector.

The Warengenossenschaft Raiffeisen-Lagerhaus also looked back on a successful year, although it was again affected by the pandemic, according to Managing Director Bliestle. The annual turnover amounts to approximately €10 million in the business year 2020/2021. The wholesale/professional sector lost around 6% of sales, while retail sales increased by a strong 11% overall.

Elections and honors
Elections and honors were also on the agenda in the most important meeting. Matthias Keller was re-elected as chairman of the board in both cooperatives. Supervisory board members Thomas Huber, Clemens Blum, and Mathias Rückert, who were both up for election, also received their votes of confidence.

Franz Wurz was honored for 50 years of membership in Raiffeisen-Lagerhaus. Mr. Wurz was himself a member of the cooperative's supervisory board from 1973 to 2000 and even served as its chairman for five years. Also, in the Raiffeisen-Lagerhaus Klaus Regenscheit, Oskar Müller, and Berta Faußner Wedele and in the Reichenau-Gemüse eG Rudi Rotzler were honored for this long membership.

Especially in times of shortages of skilled labor, one is proud to honor long-time employees, said Egino Wehrle, chairman of the supervisory board. Conny Keller, Franco Caruso, and Giovanni Padula were honored for their 25-year service at Reichenau-Gemüse eG. Daniel Spießer has been part of the organization for ten years; after training as a warehouse logistics specialist, he is now a team leader himself.

All these successes could not have been achieved without a committed and motivated team. Mr. Wehrle thanked the management and all employees for their great commitment in difficult times.