Due to climate change, water scarcity and pests

Americans consume upward of 30 pounds of tomatoes a year, three-quarters of that in processed form. While the commercially produced fresh fruit varieties are mostly grown in heavily controlled environments, away from the elements, climate change is looking like it will be a big issue for processing tomatoes.

Tomatoes are especially susceptible to climate change: according to a study published in Nature Food, by 2050, production in the United States (California produces 90 percent of the nation’s processing tomatoes), China, and Italy, which are the world’s three biggest tomato producers, could drop by 6 percent.

California is a big tomato producer, but the state is getting hotter, with temperatures reaching upward of 95 degrees in spring and summer in areas that grow tomatoes, such as the San Joaquin and Sacramento valleys. In extremely high temperatures, a lower percentage of flowers on a tomato plant will develop into fruit, said Tom Turini, a University of California farm adviser responsible for vegetable crops in central California, particularly Fresno and Kings counties.

Higher air temperatures also spell out bad news for irrigation, especially given that some areas, like California, are already facing chronic water shortages, the second problem. 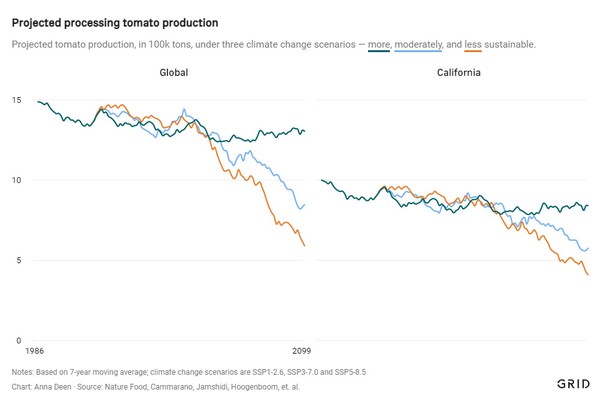 As production costs with water, fuel, and fertilizer are rising, experts anticipate prices going up even more than they already are. Compared with the $3,000 it cost a few years ago, growing an acre of processing tomatoes now costs more than $4,000, a grower in central California stated.

As of August, retail prices for tomato sauce were 17 percent higher than last year’s, while ketchup’s were 23 percent higher, according to data analytics and market research company IRI. Last year, for instance, ketchup’s price per unit was $3.08 compared with $2.64 in 2016.