There’s still some time to wait before robot pickers become commercially available for greenhouse growers, meanwhile the labor shortage continues to be the greatest difficulty for growers.

“This is especially true for growers in passive greenhouses,” Dror Erez, CEO of Automato Robotics says. “While the most significant type of greenhouses in the world are the passive greenhouse (85% of the market), most of the robotic solutions being developed are for active greenhouses, like the ones you see in Canada or the Netherlands. So, we decided to focus on passive greenhouses, as those growers have been struggling with the labor shortage and the energy and pesticides rising costs.”

That’s why Automato Robotics has recently commercialized the AutoSprayer, an autonomous spraying robot for passive greenhouses in collaboration with Raz Sprayers, an Israeli sprayers company.

A robotic platform
The concept behind the company’s idea is to create a robotic platform that maps and autonomously moves and operates around the greenhouse. On top of this, they are going to implement different types of machinery or robots, depending on the required use(harvest robots, pollination robots and more).

“We have partnered with Raz Sprayers which has developed a unique tech for sprayers,” he points out. “Besides being autonomous and saving human workers, the AutoSprayer allows for greater precision when it comes to spraying your plants. This is because the robot is connected to an app, through which growers can control the liquid flow and pressure. In this way, not only they can be sure that each and every plant is sprayed consistently, but it also reduces the amount of pesticides required due to the efficient spraying and the spraying techniques.”

According to Dror, the precision control over the spraying gives growers that additional confidence, on top of saving a lot of material. “We have made the use of this robot as user-friendly as possible,” he says. That is also because the technology can be rather new to certain growers. “So, combining that spraying tech with our robot allows every grower to improve their operation without worrying about a steep learning curve.”

Unlike robots in Active greenhouses, the AutoSprayer doesn’t move on rails and can be controlled with an app. “The only human worker necessary is for refilling the tank,” he explains. “At the same time, we are now working on a refill docking station, so that the robot will just plug itself there, and have both its battery and tank refilled.”

More efficiency, reduced consumption
The autonomous aspect is also beneficial because, according to Dror, research has shown that spraying overnight is more efficient than doing it during daylight. “This has mainly to do with the evaporation rate,” he says. “If you were to spray during the day, with the sun shining right above you, you’d need more liquid as it would evaporate faster. This then also means that the risk of big residues on the produce becomes real. Thanks to the AutoSprayer, you can just schedule its shift for the night, so that while the grower is away, the robot takes care of everything. This adds an additional layer of sustainability, efficiency, and saving of materials.” 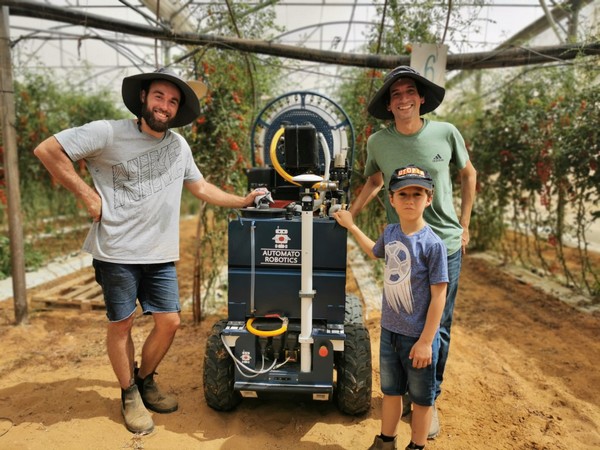 Growers in Spain, Italy, and France will be the first to rely on such a robot. “First, we will establish our presence in Spain, then we’ll go to Italy and France,” he says. The reason for that lies in the fact that those countries have a high number of passive greenhouses, for which the AutoSprayer is particularly suitable.

“At the same time, we are eyeing Mexico,” he continues. “The majority of produce coming into the US originates from Mexico, and they too have a very large number of passive greenhouses. Introducing our robot there would mean not only that growers will get bigger margins, but it will also indirectly benefit food safety and security in North America.”