"What's that one?" Cunningham asked Horticulture Center Director Jessica Chambers '93. "It's a buena mulata pepper," Chambers said with a smile. She pulled one from the plant and handed it to Cunningham.

"I didn't know vegetables could look that cool," he said. "I really want to draw these." 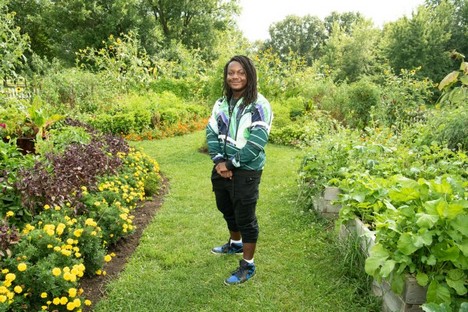 Chambers and Cunningham connected during a graphic design internship fair last spring. Chambers was impressed when Cunningham pulled a colorful jacket he had designed out of his book bag. "That's amazing. What if you did a piece of clothing that represented the garden?" Chambers proposed. 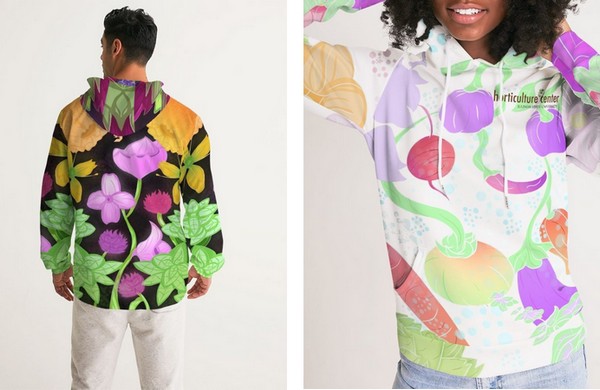 Cunningham loved the idea, and in June, he began traveling to the Horticulture Center every few weeks from his home in Steger, 35 miles south of Chicago.

"Jessica showed me around and had me observe everything—and I'm glad she did because I think if I was just using images on Google, the final result would not have been as good," said Cunningham. He took photos of the gardens throughout the summer and even picked some vegetables to bring home. The purple peppers, which Cunningham incorporated into his vegetable garden design, were "super spicy," he said.

After creating a mood board for inspiration, Cunningham made more than 20 pencil sketches, and Chambers provided feedback. "Maybe you should add some more vegetables," she suggested. "Oh, you're right," replied Cunningham. He created final versions in Photoshop and uploaded his designs into online templates for various garments. Cunningham adjusted his design to account for sleeves and pant legs.

"It can be a very tedious process, but I think it ends up looking good toward the end," Cunningham said. "It's well worth it."

Cunningham's Horticulture Collection is available online through his recently launched design company, Sol Clothing. "I like to put my whole soul into the design," he explained. Cunningham relished the opportunity to wear vibrant clothes in college after attending a high school where uniforms were required.