“We can proudly say that we have more demand than supply”

Although it was initially created to supply its supermarkets with its own production of optimally ripe vegetables all year round in Almería and Granada, the Saborum project, from Ametller, has managed to increase the number of repeat purchases among its customers of products like specialty tomatoes. The project, which has worked successfully in specialized stores, is being replicated in large supermarkets of other chains, which are increasingly demanding more. The project started with 800,000 kilos, and now the total volume amounts to between 18 and 20 million kilos a year.

"Saborum was born to meet the needs of the consumer: our end customer. This is not easy due to the great diversity of commodity products on the market, which cannibalize each other and compete fiercely in terms of both volumes and prices," says Pere Meya, director and founder of the Saborum project. Tomatoes are a perfect example; a product whose reputation was called into question when it started to be produced in large volumes for large-scale retailers. Now tomatoes represent around 80% of this project, although they are also producing other vegetables, such as zucchini, eggplant, bell pepper, and cucumber, which they supply to Ametller Origen stores. 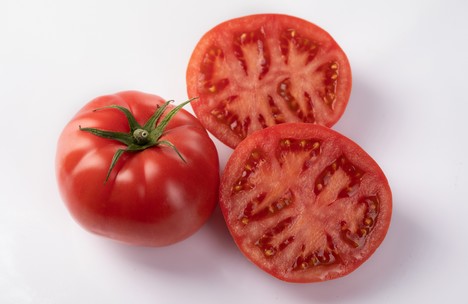 "Drawing on our experience with Ametller Origen, which currently has more than 130 points of sale, we saw that we could differentiate ourselves from the competition with tomato specialties. In Spain, they are usually ribbed, such as the RAF; very tasty, but with thicker skin. We are looking for tasty specialties to reach more consumers and allow for export expansion. Our first success has been a pink, fleshy, flavorful, and palatable tomato called TIP TOP, which has attributes that certainly make consumers buy it again," says Pere Meya.

"To achieve this, we have started working with several seed companies to find varieties that spark emotions in the end customer. We already have 4 varieties of our own, some of which are exclusively available at the national level and whose demand continues to grow. We currently have more than 100 varieties under study, from cherry ones of different shapes and colors to traditional varieties, such as the hanging tomato or the oxheart, as well as new concepts."

According to Saborum's director, making the project successful is not possible without working side by side with growers and having an enthusiastic team. "I am proud to have a team of people with a lot of enthusiasm and who believe in the project. That makes us stronger. We work hand in hand with the growers, with continuous monitoring. Our tomatoes grown with good practices and good irrigation management are a delicacy. We aim to supply top quality, and this can only be achieved when the entire chain is committed to satisfying the end consumer and, at the same time, to generating good margins and helping recover prestige in the tomato category."

"Always picking at the optimum point and making the logistics faster. This working model has been a success in specialized stores, but we have managed to make it also work in large-scale distribution. The fact is that, by doing things right, you can do something very complex on a greater scale," says Pere Meya. "Right now, we can proudly say that we have more demand than supply. In addition to selling 45% of our production in our Ametller Origen stores, the rest goes to other national chains and to other European countries."

"The production areas are located in very specific points of Catalonia, Murcia, Almeria, and Granada, which provide the best climatic conditions for year-round production. Also, after testing other geographical areas in the summer months, we have also started working in Portugal. Its Atlantic climate makes it a true paradise for tomatoes in summer. We expect to grow by 30% in terms of volume there this year, both for sale in local chains and for our supply in Europe."

Saborum has thus achieved a year-round supply with stability in the quality parameters. "We sell these tomatoes under the TIP TOP brand, and we want this brand to become a leader in the tomato category. We want to have a whole range of premium tomato specialties grouped under a single brand for sale in Spain and the rest of Europe."

Pere Meya, director of Saborum, stressed that it is very important for consumers to repeat their purchases, but it is also necessary for the price of the product to be reasonable. "As vocational retailers, we have to optimize costs to be able to reach all customers with the best possible product at an affordable price."

Lastly, Pere Meya told us that he also wants to open a line for the Horeca channel to supply premium tomatoes to restaurants and that they are very excited about participating in Fruit Attraction for the first time and having the chance to showcase their tomatoes at the stand.