Breeding of summer strawberries in China is ongoing

As a high-value cash crop, strawberry is widely loved by consumers. Recently, Hortidaily invited Mr. Li Huaibao, President of Jilin Strawberry Association and Vice President of Strawberry Branch of Chinese Horticultural Society, to share his insights on the development of strawberries in China.

Diversified cultivation patterns
"As of the end of 2020, China's strawberry cultivation area is around 0.18 million hectares, and almost all provinces and autonomous regions have strawberry cultivation. Among them, Shandong, Liaoning, Anhui, Jiangsu, Henan, Hebei, Sichuan, Zhejiang, and Yunnan have larger cultivation areas. Li said, "China has a vast territory and various geographical conditions. The cultivation modes mainly include greenhouses, solar greenhouses, small arched sheds, and open-field cultivation according to different climatic conditions. Donggang, Liaoning mainly cultivates strawberries in greenhouses. From the beginning of November every year to the end of June of the following year, a large number of strawberries are supplied to all parts of China. Jinan, Qingdao in Shandong province, Jurong, Xuzhou, Lianyungang, Yancheng in Jiangsu province, Jiande, and Hangzhou in Zhejiang province, Yunnan province, Changfeng in Anhui province are mainly growing strawberries in solar greenhouses, and fresh strawberries are supplied in mid-November every year, until the end of March of next year. In Sichuan, Yunnan, and other provinces, strawberries are cultivated in some small arched sheds, and fresh strawberries are generally available at the end of December. Strawberries cultivated in open-field are mainly in Jilin Province, Heilongjiang Province, and Liaoning Province. They are generally cultivated in autumn and covered with some straws for overwintering in winter. In the spring of the coming year, the temperature rises, and strawberries will naturally grow and bear fruit. Generally, fresh fruits will be available in mid-to-late May and generally last until the end of June. The supply period of fresh fruits is about 45 days, mainly for local market sales, and there are also sales models for tourists to pick in some areas. In several places of Liaoning, some varieties are cultivated for processing canned food and fruit juice. " 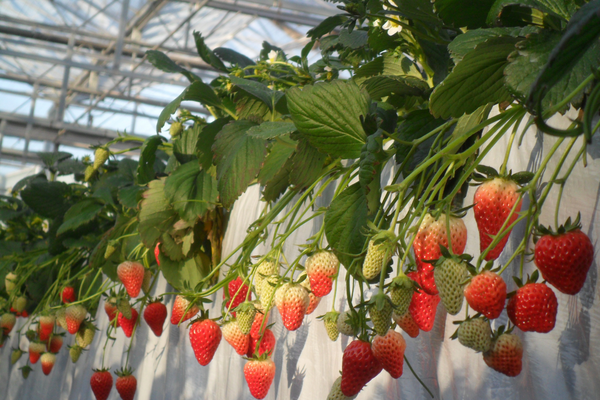 Breeding of summer strawberries is ongoing
"Most of the winter and spring strawberries planted in China are Japanese and Korean varieties, as well as some European and American varieties. Foreign varieties account for more than 50%, mainly Hongyan, Zhangji, Xiangye, Xianhong, and others. Domestic self-bred varieties include Jingcangxiang, Snow White, Yanli, Ningyu, Yuexiu, Jiandehong, and Jizaohong. Among them, the cultivation area of ​​'Hongyan' accounts for more than 1/4 of the country's total area."

"Summer and autumn strawberries are mainly in cold plateau areas such as Yunnan Province and Hebei Province, mainly American varieties, such as Monterey and San Andreas. The harvested strawberries are mainly supplied to bakery shops, cold drink shops, and hotels. At present, Yunnan Province has a cultivation area of about 533 hectares, and there are also some cultivation areas in Chengde, Longhua, and Zhangjiakou in Hebei Province. "