All sales of peat to amateur gardeners in England will be banned by 2024, the government has announced on Saturday, 27th August.

Peatlands are the UK's largest carbon store, but only approximately 13% of our peatlands are in a near-natural state. This degradation has occurred due to drainage for agricultural use, overgrazing and burning, as well as extraction for use in growing media. Bagged retail growing media accounts for 70% of the peat sold in the UK and is frequently misused, for example, being used as a soil improver rather than a medium in which to propagate plants. When this extraction takes place, the carbon stored inside the bog is released as carbon dioxide, contributing to climate change. 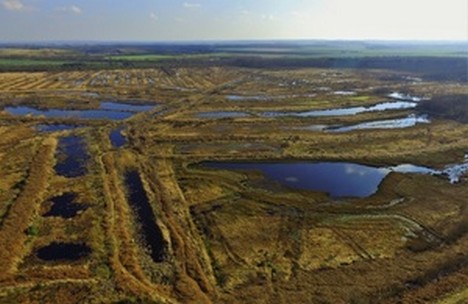 Peat extraction also degrades the state of the wider peatland landscape, damaging habitats for some of our rarest wildlife, such as the swallowtail butterfly, hen harriers, and short-eared owls, and negatively impacting peat's ability to prevent flooding and filter water. A significant proportion of the UK's water supply lands or flows through peatlands.

The government is also launching a new £5 million fund to promote the use of peatlands for sustainable farming. It will support the uptake of paludiculture – the practice of farming on rewetted peatland – which will help further safeguard food security, produce alternatives to horticultural peat and reduce environmental impacts.

Environment Minister Richard Benyon said: "This Government understands the importance of keeping peat healthy and in the ground, here and around the world – to lock up carbon, strengthen drought resilience and serve as a powerful nature-based solution to climate change. The actions announced today mark a new chapter in the story of our iconic peatlands – safeguarding their long-term health and vitality as part of our commitments to achieve Net Zero and deliver our 25-Year Environment Plan."

Precious ecosystems
Chair of Natural England, Tony Juniper, said: "Peatlands are precious ecosystems that harbor beautiful and fascinating wildlife, shape the character of iconic landscapes, purify water and help to reduce flood risk. They are also our largest natural carbon stores, locking away over 580 million tons. This ban on the sale of peat-based compost and work to phase out use in other areas is an essential step toward protecting these valuable natural assets and allowing for the recovery of degraded areas.

We are working with Defra and partners on the ground to restore thousands of hectares of peatland habitats, and today have awarded over £11 million to restore lowland sites in the southwest of England and upland sites in the north of England. These projects will have multiple benefits, holding carbon, helping some of our scarcest wildlife to recover, reducing flood risk, and rendering landscapes more resilient to climate change impacts such as drought and fire."

Professor Alistair Griffiths, Director of Science and Collections at the Royal Horticultural Society, said: "Peatlands are the world's largest carbon store on land, with great potential to store carbon long term, helping to reach net zero. They reduce flooding when rewetted, reduce fire risks and provide valuable habitats for both plants and animals. To tackle the climate and biodiversity crises, it is essential that we have a sustainable transition to peat-free alternative growing media. The RHS stopped selling peat-based growing media bags in 2019 and will continue to work with Defra, industry, and gardeners to accelerate the transition to peat-free."

Grants
Through round two of the Nature for Climate Fund Peatland Restoration Grant, Natural England has awarded nearly £11 million to six projects to support restoration works on over 7,000 hectares of peatland, adding to more than 8,000 hectares already funded through round one.

Round two of the Restoration Grant has supported a blend of lowland and upland restoration works, with the Somerset Peatland Partnership convening to restore lowland sites in the southwest of England and the Great North Bog and Moors for the Future partnerships restoring upland sites in the north of England. We will also shortly be announcing the winners of our second round of Discovery Grants.

New alternatives to horticultural peat, produced through paludiculture and otherwise, present the opportunity for England to protect nature through green job creation, as well as become one of the global leaders in the production and sale of sustainable growing media.