Various countries in Southeastern Europe are importing more and more fresh fruit and vegetables. These are countries both in the EU and outside, from the Czech Republic in the northwest of the region to Bulgaria in the southeast. Greece and Ukraine are not included in this analysis by Fruit&Vegetable Facts.

Then there are a number of countries that import modest amounts of fresh fruits and vegetables but show growth, namely Moldova (0.12 million tonnes), North Macedonia (0.10), and Albania (0.08). Bosnia imports about 0.25 million tonnes but its imports are not growing. The same is true for the smallest importer Montenegro. 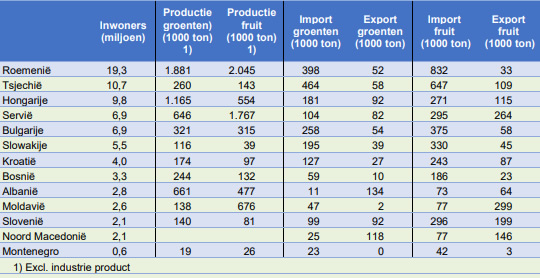 Many small countries
Romania has by far the most inhabitants, almost 20 million. The Czech Republic follows with just under 11 million inhabitants. Hungary has almost 10 million and Serbia and Bulgaria both about 7 million. There are also 5.5 million Slovaks, 4 million Croats, and 3.3 million Bosnians. Between 2 and 3 million are in Albania, Moldova, Slovenia, and northern Macedonia. Montenegro is the smallest, with 0.6 million inhabitants. Kosovo has a population of just under 2 million, but few figures are known because Kosovo is not recognized by many countries.

Romania and Serbia grow a lot of fruit
Romania with over 2 million tonnes and Serbia with over 1 million tonnes are the main fruit producers (excluding industrial products) in the region. In Romania, apples and watermelons are grown mainly. In Serbia, mainly apples. Moldova, Hungary, and Albania account for 500' to 600,000 tonnes of fruit. Moldova grows mainly apples. So does Hungary, but in addition, this country also produces a lot of watermelons. The latter product is especially large in Albania. In this country also, the cultivation of citrus is of some prominence. Citrus is also popular in Croatia. The Netherlands exports mainly to the Czech Republic, but there is growth within other countries. For both the Netherlands and Belgium, the Czech Republic is the most important sales market in Southeast Europe. The Netherlands exported 236,000 tonnes of fresh fruit and vegetables to the Czech Republic last year incl. re-export. In 2018 and 2019, it was more. Belgian exports to the Czech Republic last year, at over 100,000 tonnes, were less than in previous years when they often amounted to around 140,000 tonnes.

The Netherlands (re)exports around 150,000 tonnes of fresh fruit and vegetables to Romania annually. Last year it was a bit less than in 2020, after a constant growth before that. Hungary and Slovakia account for 50 to 60,000 tonnes annually from/via the Netherlands. Last year, the Netherlands exported 38,000 tonnes to Croatia, 25,000 tonnes to Serbia, 20,000 tonnes to Bulgaria, and 16,000 tonnes to Slovenia. A lot of re-exports take place for the Netherlands in particular. This concerns, among others, bananas. In the Southern European EU countries, bananas are also imported a lot from Belgium, Germany, and France. Other products that are frequently exported from the Netherlands to South-Eastern Europe are onions, tomatoes, carrots, oranges, pears, celeriac, pineapples, avocados, sweet potatoes, cabbage, grapefruits, peppers, and lemons. Onion sets are supplied to all countries in the region.

Belgium is all about bananas
Last year, 140,000 tonnes of fresh fruit and vegetables were exported from/via Belgium to countries in South-Eastern Europe. The majority of these exports concerned bananas: 110,000 tonnes. Of this, 80,000 tonnes went to the Czech Republic and 25,000 tonnes to Hungary. However, last year the re-export of bananas via Belgium decreased significantly. Pears, tomatoes, and leeks are the other products exported from Belgium to South-Eastern Europe.

Turkey is the main supplier and continues to grow
Turkey is the most important supplier to the countries of South-Eastern Europe, and imports from Turkey continue to increase every year. Turkish products are mainly imported into Romania and Bulgaria. Turkey is also an important supplier of Serbia. Germany is the second supplier, but the growth has stopped there. Greece is the third supplier. Imports from that country have always increased, but last year there was a slight decrease. It is Romania and Bulgaria, and Hungary that import a lot of Greek products. The Netherlands and Spain are the other main suppliers. Imports from the Netherlands reached a peak in 2019, while imports from Spain are still growing. For both the Netherlands and Spain, the Czech Republic is the most important sales market in the region. Spain also supplies a lot to Slovakia and Hungary. Poland and Italy follow. From both countries, less and less fresh fruit and vegetables are imported into South-East Europe. Polish product is big, especially in Romania and to a lesser extent in Slovakia. Italy is again large in the Czech Republic and also in Slovenia and Croatia.

Click here for the analysis with all background figures