In its 175th financial year, Gartenbau-Versicherung exceeded the 100 million euro mark for the first time in its history, with gross premiums written of 102.0 million euros. However, with a gross loss ratio of 76.8%, the 2021 financial year was also one of the years with particularly high losses. Above all, snow, storms, and hail in Germany ensured that in the end, only a moderate amount of 2.0 million euros could be transferred to the reserves. "But that's what we're there for as an insurer, after all," stated CEO Manfred Klunke, for whom this year's Members' Representative Meeting (MVV) was the last major appearance before retirement. On the fringes of the MVV, he handed over the baton to his successor, Board member Christian Senft. The regular election of Supervisory Board members had previously confirmed, among others, the previous Chairman Frank Werner in his office. 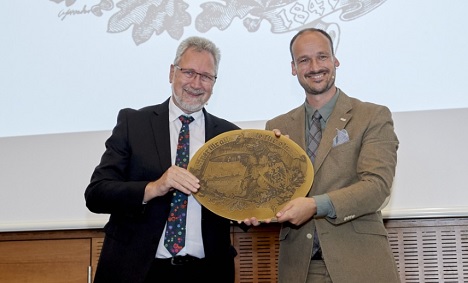 Manfred Klunke and Christian Senft during the official handover of the baton.

One in four members reported a loss in 2021
"This is definitely a result with symbolic character," found CEO Manfred Klunke during his presentation of the business development to supervisory board members and member representatives. After all, it was precisely in its anniversary year that Gartenbau-Versicherung supported its member companies with particularly high claims payments. As many as 3,200 of the approximately 14,300 members had to report a claim in 2021. The gross loss ratio in the home market of Germany was even the highest in the 10-year average at 86%.

Manfred Klunke, therefore, looked back before the elected representatives of the members at sometimes dramatic events due to snow pressure damage, floods, and storm events, which had hit some regions particularly hard in Germany. However, there were also several significant series of storms in Italy in 2021, such as heavy hailstorms over several days around Bergamo in the summer and heavy rain and storms in Sicily in the fall.

Significant premium growth abroad and in indirect business
In addition to the high losses, the positive premium development also underscored the special setting of the 175th financial year: for the first time, the historic mark of 100.0 million euros was exceeded in total business. The overall growth of 8.7% resulted primarily from the significant increase in premium volume in the foreign markets (+9.5%) and in indirect business (+20.7%), which is largely attributable to the cooperation with Vereinigte Hagelversicherung. At the dual-level, windstorm insurance, in particular, grew (+7.9%).

By contrast, the insurance business in Germany stagnated at a high level, as expected: while the number of members and policies declined slightly as a result of structural change in the horticultural sector, thus continuing the downward trend of recent years, insured sums and premium volumes increased slightly, partly due to higher market values of crops.

Overall, the insurance benefits paid out by the horticultural insurance company for all member companies in direct business amounted to 50.2 million euros. This was 13.6 million euros more than in the previous year.

Sustainability firmly anchored in business strategy
Representing Dr. Dietmar Kohlruss, Chief Financial Officer and Chief Risk Officer, Manfred Klunke also addressed risk management and the sustainable development of Gartenbau-Versicherung. "Solid finances are the prerequisite for us to be able to meet our obligations to members even in such loss-making years," he said when presenting the annual financial statements. He, therefore, expressed his satisfaction that this year, too, a plus of 2.0 million euros could be generated for the reserves as a result of the increase in premiums.

After all, he said, this was also a contribution to sustainability, a topic that was currently occupying the horticultural insurance company intensively. "Our aim is to publish our own sustainability report for the first time next year, in which we will comprehensively present our goals and activities in this area," Klunke said, explaining the specialist insurer's plans.

Outlook for new products and services
Finally, Christian Senft, the designated new CEO, gave an outlook on the current fiscal year and new projects. Accordingly, premium increases are also expected for 2022; the total volume is currently forecast at 108.1 million euros. In terms of losses, the major storm event in February has so far stood out, causing losses totaling 9.0 million euros, mainly in the Netherlands but also in Germany and France. In addition, there have already been several other storm and hail losses this year, especially in the last few weeks, as well as a major fire and considerable damage caused by quarantine pests.

In his presentation, Senft placed particular emphasis on future topics such as product development, new markets, and the expansion of services for members. In Poland, where the horticultural insurance company is now active with two cooperation partners through its sales partner AgroRisk Polska, offers have been made following intensive preparation in recent weeks. Optimizations of the product range for perennial gardeners, garden centers, and weather protection systems are in progress or have already been implemented. In addition, a new website with its own member portal will improve communication and service for all members. "Our anniversary year was particularly rich in initiatives and projects that were not yet very visible to the outside world but will certainly bear fruit for everyone in the coming years," Senft explained to the member representatives.

"Security must remain affordable"
He also picked up on the current mood in the horticultural sector, which he said was characterized by high-cost increases, concerns about an energy crisis, and, in some cases, a gloomy sales situation. He also said that horticultural insurance claims settlements have been affected by higher costs for building materials and shortages of materials and tradesmen. "We are closely monitoring the current situation in the horticultural sector and are in permanent discussions here," Senft said. He assured members of the greatest possible support. "With everything that is currently rolling in on the businesses, it must be clear: Safety must remain affordable, and business operations must be able to restart quickly in the event of a loss. We are doing everything possible and necessary to achieve this."

Supervisory Board members confirmed, new member representatives elected
The term of office of three members of the Supervisory Board came to an end in Frankfurt. All stood for re-election and were confirmed in their positions. This means that horticulturalists Frank Werner from Niederkassel, Ute Martin from Zwenkau, and Jens Schachtschneider from Neerstedt will continue to be part of the board in the future. Newly into the circle of the member representatives and their deputies by choice Jochen Engelhard from Alzenau, Heiko Hagdorn from Eberdingen, and Johannes Schmidt from Koenigslutter were taken up.

"Passing the baton" in the chairmanship of the Executive Board
On August 1, 2022, Executive Board member Christian Senft will take over as Chairman of the Executive Board from Manfred Klunke, who will retire at the end of the year. To mark this occasion, an official handover of the baton has already taken place at the Members' Representative Meeting in Frankfurt. During a ceremony, the two laudators Frank Werner, Chairman of the Supervisory Board of Gartenbau-Versicherung, and Dr. Rainer Langner, Chairman of the Board of Vereinigte Hagelversicherung, paid tribute to the professional life's work of Manfred Klunke, who worked for the company for 40 years.