Horticulture and seeds have been the number one priority of the Netherlands in Nigeria for the last couple of years. Many of its activities were designed and financed from a food security and private sector development perspective and run in the North of Nigeria. For example, The Collaborative Seed Program and the Seeds4Change impact cluster, but also the newest program, the HortiNigeria program, just to name a few. That last one also has a component that looks at innovations in the southwest (namely Oyo and Ogun state). The agricultural team in West Africa has been working on yet another dimension to this wide array of activities. From the perspective of feeding the cities and commercially driven agribusiness, we have engaged in a collaboration with Lagos state, we conducted a study on protected horticulture that will soon be published, and we organized a fact-finding mission to The Netherlands.

Why Nigeria, why the Southwest
Nigeria has the largest economy in Africa and is also the most populous with over 200 million inhabitants. Agriculture is a significant contributor to GDP, and it employs about 70% of the population. Lagos is the commercial heart of the country as well as the economic hub of West Africa. Lagos is also known to be the leading tech hub in Africa where there are various innovative start-up companies -including in Agriculture. Currently Lagos produces just 20-24% of the food it consumes. The Lagos State Government has set itself the target to increase this to 40-50% by 2025. Increasing urban farming is not just a government goal, but also a necessity considering the anticipated population growth to 30 million by 2030.

Lagos state is also known to have fast adoption of technology and innovative techniques in agriculture, and welcomes the best possible partners to grow food production further. Hence, this event forms a key step and a starting point towards further strengthen the relationship between Lagos state and the Netherlands on protected horticulture as part an innovative approach to addressing the food security issues in the city of Lagos. This event signaled the beginning of a engagements for a long term partnerships between the Consulate of the Netherlands in Lagos and government Lagos state and its enterprises. This event  also positions the Dutch horticulture sector as key knowledge and innovation partners towards addressing Lagos food and nutrition challenges in selected value chains.

Participants at the event lauded the match-making of Netherlands and Lagos on Greenhouse farming with the believe that such initiative would bring more younger ones into its fold, particularly those already edging away from traditional farming. They also harped on the need for proper funding of Agriculture, security, insurance of assets, access to finance, research, training and education as well as ensuring provision of power supply. Urban farming comes with great benefits, with its adaptability, accessibility, which aids the provision of inexpensive fresh produce particularly to low income communities. It also builds bonds by stimulating the economy and providing a mutually beneficial experience, reduces the need for huge capital outlay for land purchase.

Joint event on Urban Agriculture
The Consulate general of the Kingdom of Netherlands, and the Lagos State Government on the 2nd of Match hosted a Symposium titled “Urban farming; feeding the cities in Lagos Nigeria. The events was a hybrid event with a total of about 253 persons in attendance. From key industry leaders , farmers, investors, youths to financial institutions. Also present at the event were The Deputy Governor of Lagos state, Dr. Kadri Obafemi Hazmat ,The Lagos State Honourable commissioner of Agric, Ms Abiola Olusanya, The Ag. Permanent secretary, LASG Ministry of Agric, Lagos Economic Planning and Budget, Commissioner, Samuel Egube, Special Adviser to the Governor on Sustainable Development Goals and Investment, Solape Hammond.

During the event The State Governor, Babajide Olusola Sanwo-Olu represented by the deputy governor, Dr Kadri Obafemi Hamzat noted that the collaboration will ensure the availability of good quality planting materials and agricultural equipment for the farmers of the State. He said the partnership will increase local production and availability of leafy and fruit vegetables. Dr. Kadri Hamzat also added that urban farming initiative has the potential of improving food security and sustainability amongst urban dwellers, while also combating food losses due to logistic complexities and millage. “The Deputy Governor share enthusiasm in the potentials of the collaborations to support farmers with various agricultural inputs, technologies, equipment and knowledge that would stimulate aggressive and sustainable agricultural production locally.

Panel session on future of protected horticulture in Lagos

The Representative of the  Governor of Lagos state, reaffirmed that the provision of inexpensive fresh produce, particularly to low-income communities, would stimulate the economy and providing a mutually beneficial experience, as it will reduce the need for huge capital outlay for land purchase etc. He also disclosed that his administration has prioritized agricultural production thereby making food security one of the cardinal programs of the THEMES Agenda and a key strategy towards making Lagos a 21st Century economy. Thus the state have embarked on various projects and programs aimed at increasing food production as well as provide food security by laying more emphasis on areas where the state have comparative advantage.

The Commissioner for Agriculture, Ms. Abisola Ruth Olusanya also joined in stating that the State Government is committed to ensuring food security in the state as the government has set for itself the target to increase the quantity of food it produces and consumes from 20-24%, to 40-50% by the year 2025. She said that with the population of Lagos State at about 22 million, the importance of food security cannot be over emphasized and increasing urban farming is not just a government goal, but also a necessity considering the anticipated population growth to 30 million by the year 2030. She added that the state is known to be swift in the adoption of technology and innovative techniques that can provide substantial quantities of food for the populace despite the challenge of limited landmass being faced in different parts of the State. Ms Olusanya however affirmed that the vibrancy that the State government brought to Agriculture in the past few years would also reflect on the Urban Farming initiative after appropriate adoption.

The Deputy Consul General of the kingdom of the Netherlands, Mr. Arie Plieger acknowledged the interest of Lagos to develop the horticulture and green house farming. He stated that his country has intensified bilateral cooperation with Lagos State in the area of social economy. While stressing that the land mass of the State was not sufficient like that of Netherlands, Plieger urged Lagos State to explore the strength of the young talented workforce to actualize the initiative. According to him, the key for collaboration is to understand each other’s reality, especially for Dutch knowledge-institution and private sector players who need more  understanding of the dynamics of Southwestern Nigeria. He said; “During the year, the consulate hope’s to get a mission from Nigeria to the Netherlands constituting critical stakeholder’s as well as Dutch mission coming into Nigeria, so as to be able to connect with each other’s reality strengthening  partnerships.” Plieger stressed that Lagos has indeed shown commitment with its 5-year AGRIC road map and the Consulate of Netherlands would give it a needed support institute a sustainable and smart knowledge hub. 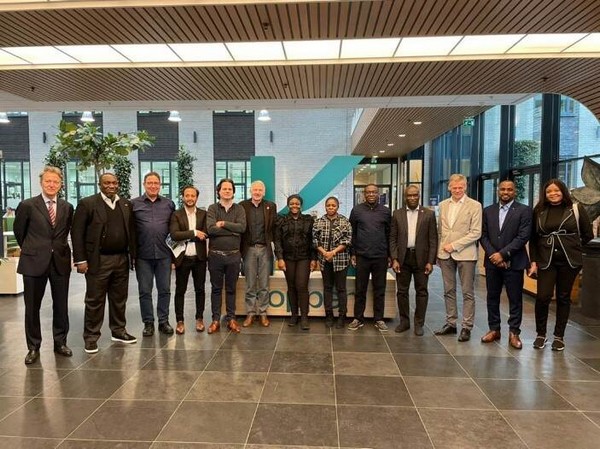 The events had presentations on the study on protected horticulture in south western Nigeria conducted by Delphy and introduction of green port Lagos by Coen Hubbers of the Leiden-Delft Erasmus Center for Sustainability; the result of the study showed several models of protected horticulture being adopted by investors and entrepreneurs in the south west of Nigeria. But also highlighted that there is also the need to close the knowledge gap in the practice of protected horticulture farming around the regions. Also, investigated was the economic models of the practice across different technology level and scale. The session ended with a validation panel session consisting of Victoria Madedor, Co-founder and board member, Agroveried, Kudzai Gumunyi, Divisional Head of Agric Business, FCMB,  Samson Ogbole, Team Lead, Soiless Farmlabs, Dr. Tunrayo T. Joseph-Adekunle, Senior Lecturer, Dept of Horticulture, FUNAAB, Prince Adeyinka Omirin, Ag. Permanent Secretary, LASG Min of Agriculture.

Follow up
After the event, the mission and publication we are currently working on an Impact Cluster. The agreement between JMSF Agribusiness Ltd., Soilless Farm Lab and African Farmer Stories on the Nigerian side and parties on the Dutch side such as Priva, Viscon, Seed2Feed, the Dutch Greenport hub, Pan African Seeds BV and Koppert Biological Crop Protection has already been signed. The Netherlands and the southern states in Nigeria are exploring the possibility of developing a roadmap for commercial horticulture and we will also continue to work on cross linkages between the food security, private sector development and agribusiness activities since they are all important elements of a thriving food system in Nigeria.

You can reach out to The Netherlands Government Agricultural team in West Africa, Landbouwteam, Ghana, Ivory Coast and Nigeria by e-mail