For the upcoming barbecue season, Burgenland vegetable marketer LGV Sonnengemüse offers a broad portfolio of fresh vegetables from regional cultivation. On offer are not just tried and tested products such as Melanzani, young onion, and potato, but special produce as well.

"Our Pimientos de Padrón are cultivated in the Burgenland Seewinkel in Wallern by Roswitha and Richard Unger in the third generation. With these years of experience, the passionate vegetable farmers have the best prerequisite to also try out new things. Since 2020, the popular Pimientos de Padrón are cultivated. From June to the end of September, the grilled peppers are available in grocery stores - freshly harvested from the field to the supermarket shelf." 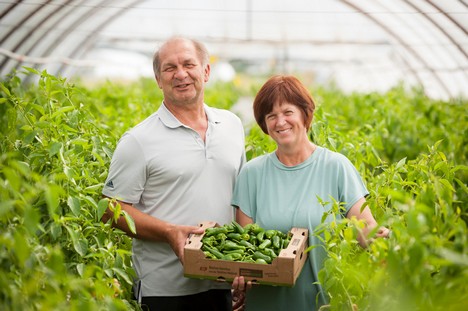 More than 60 varieties of fresh vegetables and garden herbs are harvested daily by LGV gardeners and vegetable farmers in Vienna, Lower Austria, and Burgenland and arrive dew-fresh at food retailers. LGV gardener Andrea Steinhart has been cultivating the tasty, bright purple vegetables in Vienna Simmering since 2009. "Affectionately, Andrea is known as the "Mama of Melanzani." Her passion and conviction brought her to this crop. Her goal was to turn the vegetable landscape upside down and create a place for melanzani in Austrian kitchens - and she's done it."

Young onions are in season from March to October. In the Seewinkel region of Burgenland, Günter Peck is a third-generation grower of white and red young onions in the open field. Three hundred days of sunshine and the Pannonian climate ensure optimal ripeness and the particularly fine taste of the young onion. Early potatoes also grow and thrive in Austria's vegetable gardens. Seewinkler Sonnengemüse farmer Gernot Müllner cultivates organic early potatoes with passion and dedication in the open field in Pamhagen. The farm has been operating organically since 2001. "After a successful harvest year, the crops in his fields are changed so that the potatoes will thrive again next year."