Water issues in Mexican agriculture: Focus of the agri-track in upcoming water mission

The Netherlands Embassy in Mexico and The Netherlands Enterprise Agency (RVO) are organizing a water mission to Mexico from 5 to 9 September 2022 for Dutch companies specializing in water solutions and interested in the Mexican market. The mission will consist of two tracks: an urban track and an agri-track. The latter will take Dutch participants to the agri hotspots of Sinaloa and Guanajuato (in the Bajío Region). In this article, we will elaborate on the water issues the agricultural sector in these regions is facing. 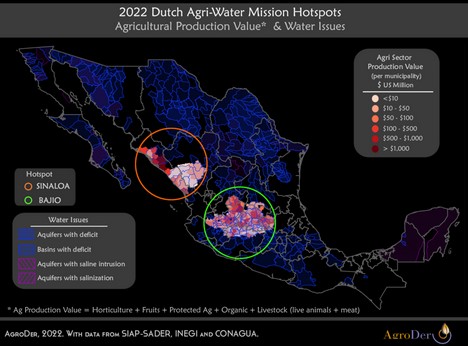 Agricultural growth
The Mexican agri-food sector has been growing steadily. Between 2010 and 2019, the agricultural value grew 204%, while livestock grew 203% and aquaculture by 35%, topping US$35 billion, US$33 billion, and US$926 million, respectively, in 2019. Exports have been a major driver of this growth. Mexican agri-food exports have increased from US$13.4 billion in 2010 to US$26.3 billion in 2019. This growth of the agri-food sector has nevertheless had its toll. Water issues are present in most agri-food regions in Mexico, and major agri-food production regions rely on basins and aquifers with water deficits, pollution, and salinity, where soil degradation is a common issue. Forecasts point to significant sector growth in the upcoming years in terms of production and value, but estimates also expect increasing greenhouse gas emissions, pollution, and water scarcity.

Identified hotspots
A market study commissioned by the Netherlands Embassy in 2021 into the opportunities for Dutch water companies in the Mexican agricultural sector concluded that Dutch companies interested in capitalizing on these opportunities should focus on five identified regions, the so-called "hotspots." These hotspots are highly productive agri-food regions with water issues that could be addressed by Dutch expertise and producers that are able and willing to afford Dutch technology. The study describes the specific water issues and situations of each of these hotspots. 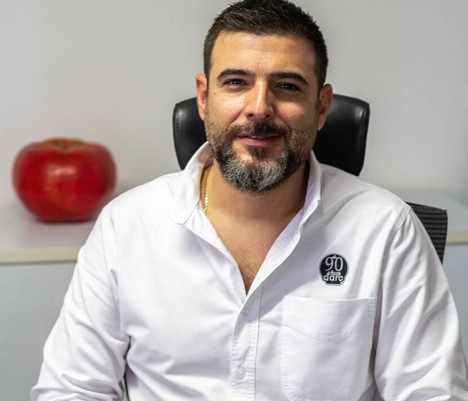 The agri-track of the upcoming water mission to Mexico will visit two of these hotspots, i.e., the state of Sinaloa (North Pacific) and the state of Guanajuato in the Bajío-Occidente (Central–Western Mexico) region. Both are in urgent need of solutions for important water issues.

Sinaloa (North Pacific)
Sinaloa is Mexico's third most important agricultural state and its second-largest agricultural exporter. Agricultural activities make up 12% of its economy, and it is the state with the largest area of protected horticulture. Sinaloa is Mexico's largest producer of maize, tomato, cucumber, chickpeas, green tomato, aubergine, and sesame seeds and has an important food processing industry. It is also a region that suffers increasing droughts and pollution, creating many opportunities for water management technologies.

"In Sinaloa, we have 11 reservoirs with a total volume of 22,760 million cubic meters. We have scorching summers, and our precipitation (around 800 mm/year) is practically concentrated in just two months", says Enrique Riveros, President of AARC, the Growers Association of Culiacán in Sinaloa. "Because of this, we are dependent on irrigation, and our greatest challenge is the efficiency of irrigation in order to better conserve and not waste the water we have in the reservoirs.

The vast majority of irrigation is by gravity through furrows or flooding, so the expense and waste of water are significant. In addition, a lot of water is lost during the distribution of the water from the reservoirs to the planting plots".

According to the market study, the main water issues in Sinaloa are aquifers with water deficit, water pollution, and strong and extreme soil degradation.

While this region is well known as a horticultural exporter and its markets are growing, demand for water-intensive crops is also increasing. The main challenge is to improve water access through infrastructure at all levels. There is a strong need to encourage the modernization of irrigation and water reuse systems.

Enrique Riveros echo this. "Currently, the vast majority of us irrigate either through pre-established programming or at the interpretation of the farmer. We need solutions for simple and practical measurement of the amount of water that is really required by the crops. This way, we know when it is necessary to irrigate and how much.

We also need more efficient irrigation systems and, since these systems are expensive, financing for their acquisition. At the macro level, volume measurement systems are needed in reservoirs and water distribution channels, as well as technologies for efficient use and reduction of losses. Rain stimulation technologies, or basically any idea or system that helps us spend less water or capture more water during the rain cycle."

Guanajuato (Central–Western Mexico)
The State of Guanajuato is another agricultural hotspot, part of Mexico's booming Central Bajío region, the country's primary agricultural production region. The region already hosts many Dutch suppliers to Mexico's growing agricultural sector. Within El Bajío, Guanajuato is the second most important agricultural producer. At the national level, it is the largest producer of broccoli, barley, cauliflower, and lettuce, the second largest producer of agave, onion, asparagus, sorghum, and wheat, and the third largest strawberry producer. It also has an important food processing industry. As the state suffers from water scarcity and pollution, there are ample opportunities for water management technologies for improved water efficiency at farms.

The main water issues identified by the Embassy's study in this region are water basins and aquifers with a water deficit, water pollution, and soil degradation. The main water challenges are to satisfy the irrigation needs of the total surface with limited water availability in lakes, basins, and aquifers and inefficient and obsolete irrigation technology. There is also limited water reuse and treatment in the state, while in some specific municipalities, intensive use of chemicals adds further pressure to soil and water quality. Few agricultural companies in the state have so far invested in irrigation technology to improve irrigation efficiency.

Water mission to Mexico
All of the above creates opportunities for Dutch businesses that offer water technology and solutions for farmers. This is why the Netherlands Embassy in Mexico and The Netherlands Enterprise Agency (RVO) are organizing a water mission to Mexico from 5 to 9 September 2022. The mission will be led by Dutch Water Envoy Henk Ovink and will consist of an urban track and an agri track. The agri-track will consist of an interesting program in Mexico City, Sinaloa, and Guanajuato, which will offer Dutch participants:

A visit and a tailor-made agri program at the Aquatech trade show in Mexico City (organized by RAI Amsterdam and Tarsus).