More and more types of culinary tomatoes being cultivated

In Europe, shoppers have had their choice of tomatoes for years. 'Standard' round red tomatoes are available in large numbers, but supermarket chains are increasingly carrying special premium lines too. They want to use these tomatoes - with that bit of extra appeal - to distinguish themselves.

It is up to breeding companies like Axia Vegetable Seeds to develop these varieties. Varieties that do not so much broaden the existing range but deepen it. With its Flaxorax line, this Dutch breeding company focuses on the taste experience. This season, this line has two new varieties, which were displayed in early April at Axia's stand, brimming with all kinds of tomatoes, at Fruit Logistica. The line now carries a total of six varieties. 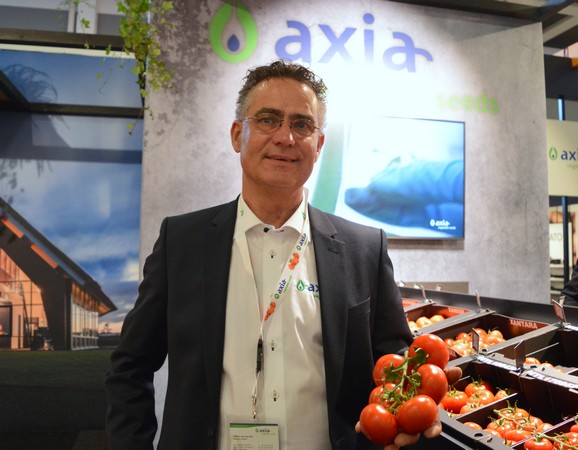 These two new varieties are aimed at the larger size market - both are TOVs, with one weighing in at an average of 110g (medium-large), the other at roughly 130g. Like all the other Flaxorax tomatoes, both have a deep red internal color with dark red flesh. But it is easy to see they are different, even from the outside. At the trade show, William van der Riet, Business Initiator at Axia, picks up one of the HTL 1907547, 110g tomatoes.

"See, it's slightly flatter and has a dark red color, which makes it appear culinary. This tomato thus looks and feels like a typically premium line of retail tomatoes. In supermarkets, you often find medium-to-large vine tomatoes in the flavor segment," he points out. Axia offers the variety for both lit and unlit cultivation. William sees opportunities with, among others, German supermarkets. "People there are willing to pay extra for good-tasting tomatoes in this segment." 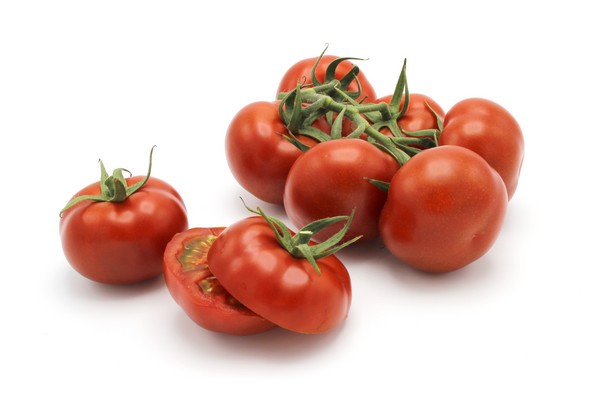 The HTL1907548, the larger 130g truss variety, is also unusual. It has a flattened, round shape, and once sliced open, its deep red-colored flesh and green-tinged gel are evident. The reference varieties in this market segment are often rounder, says William. "You find these packaged in stores. This variety's unique fruit shape makes it distinctive - a tomato with just a little more identity and character."

Larger with more exclusive appearance
It is crucial, however, that the culinary-appearing varieties are easy to grow. "Besides having a good shape and flavor, productivity also has to be high. In terms of kilograms, a premium line's production can be a little lower, though. That is because their price compensates somewhat for the sometimes slightly lower production, just like some specialties. But, productivity-wise, the variety can't be too far out of line either," William continues. Last year the company, therefore, focused on stabilizing the Flavorax line regarding cultivation and presentation. This year, practical trials with the new varieties in the line will follow. "The market feedback this provides is invaluable."

With all these current developments, it is a tense year for breeding companies. Not only because they have to light and heat their greenhouses, but especially because it is unclear how consumers will react to rising prices. "Will they choose 'regular' food or something more culinary?" wonders William. He doesn't know, though he does hope for a particular outcome. "Maybe the market will opt for more value for money, with perhaps slightly larger tomato varieties than the mostly somewhat smaller varieties currently on the market. But larger ones that look, feel, and, especially, taste, like premium tomatoes," he concludes.

Regardless, Axia is committed to flavor and appearance with its Flavorax line. However, should the high costs force the market to keep following a more traditional cultivation pattern, bulk varieties will come into the picture, William expects. Here, too, Axia has a broad assortment, with varieties such as Xandor and Macxize, the range's much cultivated TOVs.