In case you haven’t noticed, things have changed over the last decade in Canada’s strawberry market – a lot. Field growers bring plants up out of the soil and onto tabletop systems. New substrates and containers have been introduced that specifically support the North American climate and context. High-tech greenhouse growers are entering the market in a big way, delivering fresh berries to retailers across North America all season long.

So, what’s behind Canada’s berry boom? A lot of things, says Kevin Schooley, executive director of the North American Strawberry Growers Association. Having spent nearly two decades in his previous role as the executive director of Berry Growers of Ontario, a provincial organization representing blueberry, raspberry, and strawberry growers, Kevin has had a front-row seat to the evolution and innovation taking place within Canada’s berry industry.

“Up until recently, it was all field grown, bare soil, with a small percentage of raised beds – traditional berry growing techniques. Today, we’re looking at a completely different market.” 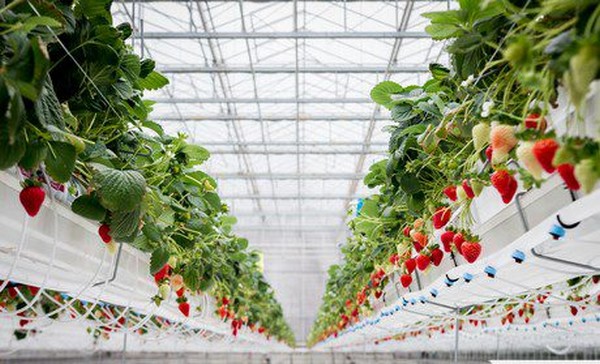 Field berries growing in a tabletop system under a high-tunnel greenhouse.

Growing demand for local freshness and flavor
Like most things, the berry market is retail-driven. Demand for fresh, local products is at an all-time high, and the pandemic has only added to that.

“Grocery chains are calling for year-round production, and Canada’s greenhouse industry is answering,” explains Kevin. “Growers are drawing on their experience and success in vegetable production and quickly adapting greenhouse space for strawberry production, which helps expand their retail offering.”

While Canada may not be ready to compete with the volumes coming out of California and other areas of the U.S., growers are carving out a niche, offering local freshness and quality flavor.

“Anything that can be on store shelves within 24 hours qualifies as local,” Kevin explains. “From Ontario, for example, growers can pretty well reach anywhere in North America within that timeframe, and that gives us a competitive advantage.”

Experimentation in berry variety is also giving growers an edge on flavor and quality. “Many greenhouses use field varieties – mainly Albion – but we’re starting to see new varieties that are specifically suited for greenhouse production, and that’s going to make a difference,” says Kevin.

Canadians are welcoming the change, too. While the price tag for Canadian greenhouse-grown berries is higher on average, Canadian consumers seem ready to open their wallets. 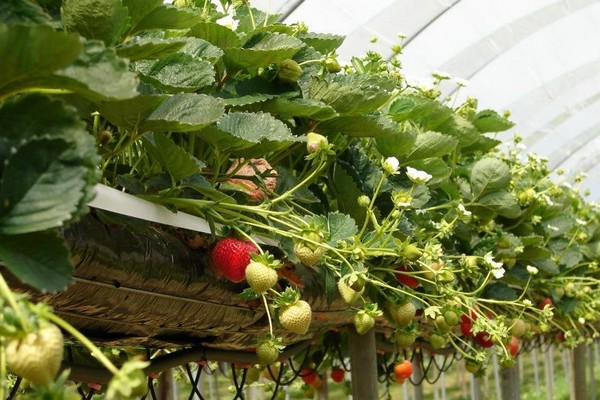 Field berries growing in a tabletop system under a high-tunnel greenhouse.

Tabletop and tray plants improving efficiencies
Innovation is underway on the field grower side, too, with an increasing interest in tabletop systems that bring plants out of the soil and into the substrate. For many, the upfront cost is worth the return, which can include higher yields, less shrink, and fewer staff required during harvest season.

“Some field growers have told us that they’re saving up to 40% of their labor costs just by getting plants off the ground,” says Shawn Mallen, A.M.A. Horticulture’s berry expert and manager of hydroponics and manufacturing. “On top of that, this kind of growing method can make the labor you do need more efficient overall.”

Adding to that efficiency is the introduction of tray plants, an innovation driven by the greenhouse sector now taking root with field growers. Tray plants have raised legs, bigger cells, and hold plants for longer periods of time, resulting in larger plants with more crowns and a higher potential to fruit right away. Designed for a bench or tabletop, tray plants can be planted and in production in as little as eight weeks.

“Even with no environmental controls, field growers can extend the season on either end by adding tray plants, tabletop systems, and substrate to their strategy,” says Shawn. “If they’re under high or low tunnels, even better.”

The right substrate for the right plant in the right context
The introduction of European substrate has been a game-changer for field and greenhouse berry growers alike. 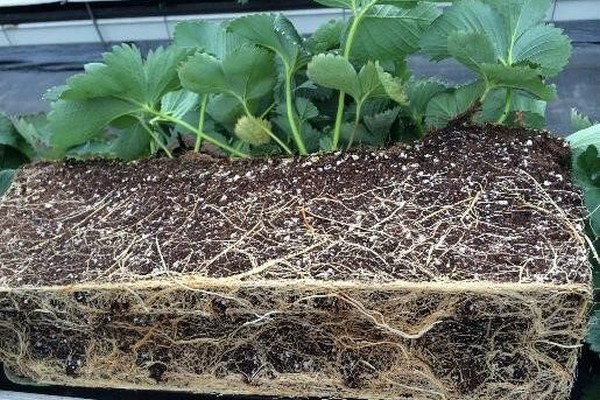 “Before we brought European peat into the market, greenhouse growers were relying on the same substrates used for their veggie crops,” says Shawn. “Now, growers have options.”

The best options, according to Shawn, are those which have been specifically adapted for the North American climate, such as BC5++. It’s comprised of European block peat available in different sized fractions, combined with coco fiber and perlite.

“The innovation isn’t just in the mix. It’s in ensuring the right substrate for the right plant in the right context,” says Shawn. “Right now, with its complex fiber structure, European peat is the best solution for berries, specifically strawberries, and raspberries.”

“We’re seeing the next generation deciding to stay or return to the family farm, and they see the potential for economic success,” says Kevin. “Many young farmers are more willing to change things up, embracing technology and increasing potential for income by adding acreage, increasing yields or looking at new revenue streams.”

Young growers have reason to be hopeful. With more innovation comes more opportunity.

Robotic harvesting systems are already being trialed in the Netherlands and U.S. on the research side, though it’s the robotics industry driving the work. “When this will actually translate over to the grower side is an open question,” says Shawn, “but it’s a safe bet that we’ll see robotics in greenhouses in the future.”

Growers can also expect artificial intelligence to play an increasing role. “A.I. is already being used for packaging greenhouse-grown vegetables, sorting fruit by size, color, weight, and dimension,” says Shawn. “These things tend to start on the marketing side and work their way back into production.”

When it comes to increasing efficiency and reducing labor, automation will continue to be king. “Automation depends on uniformity, so any innovation that can deliver on that front will be in demand,” says Shawn.

“That’s the thing about innovation,” he adds. “It doesn’t stop. If you want to continue to grow, you have to continue learning and be willing to try new things. That’s the attitude we’re seeing in Canada’s berry market today, and the future looks bright.”