It's one of the biggest challenges facing the environment and farmers across the globe – pest control. But now, University of Queensland scientists have developed an environmentally friendly spray that could prove to be a game-changer for the agricultural industry.

The breakthrough is part of UQ's BioClay technology, a safe and sustainable alternative to chemical pesticides, which has been developed over the past decade by the Queensland Alliance for Agriculture and Food Innovation (QAAFI) and the Australian Institute for Bioengineering and Nanotechnology (AIBN). 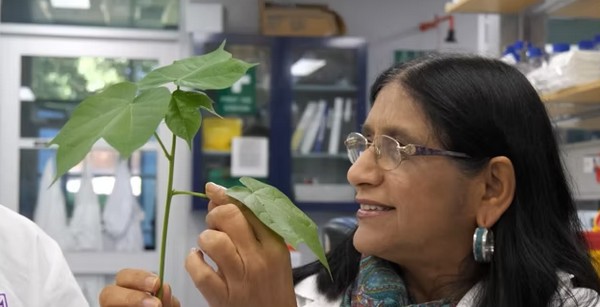 Research team leader Professor Neena Mitter said it was an important development for crop protection because it was effective against whitefly (Bemisia tabaci), a small insect responsible for the loss of billions of dollars in agricultural crops around the world.

"Silverleaf whitefly (SLW) is considered an invasive species in the United States, Australia, Africa, and several European countries, and it attacks more than 500 plant species including cotton, pulses, chili, capsicum, and many other vegetable crops," Professor Mitter said. "The insect lays eggs on the underside of the leaves, and the nymphs and adults suck the sap from the plant resulting in reduced yields."

In addition, whiteflies also transmit many viruses which pose a threat to healthy crops. Control of the pest has been difficult due to its ability to quickly develop resistance to traditional chemical pesticides. The BioClay spray uses degradable clay particles that carry double-stranded RNA, which enters the plant and protects it without altering the plant's genome.

"It is the first time the BioClay platform has been used to target sap-sucking insect pests," Professor Mitter said. "When whiteflies try to feed on the sap, they also ingest the double-stranded RNA, which kills the insect by targeting genes essential to its survival. The world of RNA is not just responsible for COVID-19 vaccines, it will also revolutionize the agricultural industry by protecting plants from viruses, fungi, and insect pests," she said. 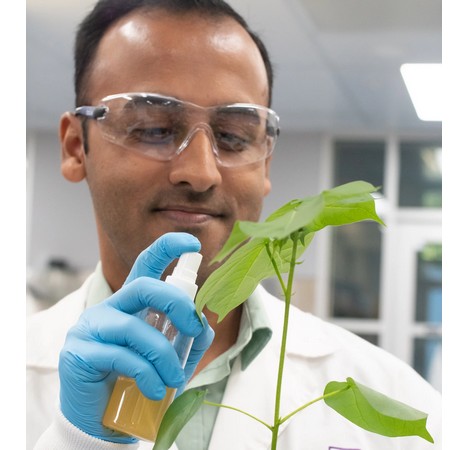 To identify suitable gene targets, PhD candidate Ritesh Jain went through the global database of genome sequences. "Initially, we had to screen hundreds of genes specific to SLW to see which ones would affect their growth," Mr. Jain said. "Importantly, the double-stranded RNA proved harmless when fed to other insects, such as stingless bees and aphids."

The Cotton Research and Development Corporation's Senior Research and Development Manager, Susan Maas, says SLW is a major pest of cotton globally due to its ability to contaminate and downgrade lint quality. "This innovation will support the industry to maintain Australia's reputation for producing uncontaminated, high-quality cotton in a safe and environmentally friendly way," Ms. Maas said. 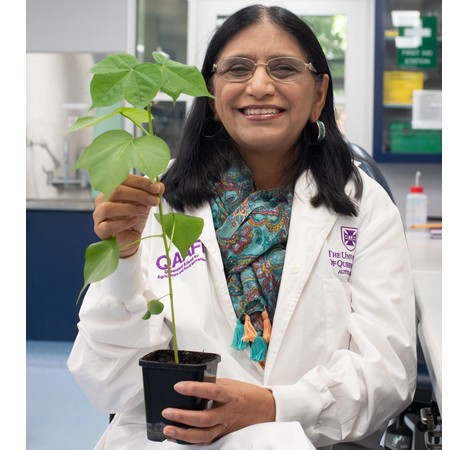 Professor Neena Mitter holding one of the crops susceptible to whitefly.

Hort Innovation's research and development manager, Dr. Vino Rajandran, said the spray could give the industry another tool in its biosecurity armory. "It has the potential to save growers time and money and is a great example of industry levy investment in action," Dr. Rajandran said.

The researchers will now work with industry partner Nufarm Limited to test the whitefly BioClay formulation in real-world production systems.

Nufarm's Global Lead for Transformational Projects, Mike Pointon, said the company was "proud to be partnering with these world leading scientists to develop cutting-edge technologies that bring new, alternative control options to farmers."