Crop failures have dented pepper production, leading to an increase of nearly 7 percent in pepper imports in the first four months. Specifically, Vietnam imported 12,105 tons of pepper during the period, of which 10,456 tons was black pepper and 1,649 tons white pepper.

Cambodia became the largest pepper exporter to Vietnam with 4,709 tons. Brazil came next with 3,915 tons, and then Indonesia with 1,855 tons. Indonesia was also the largest supplier of white pepper to the country, with 1,493 tons.

According to the Vietnam Pepper Association (VPA), mounting pepper import can be attributed to recent crop failures, which drove domestic pepper production down to 165,000-175,000 tons, 10-15 percent less than last year. The contracting production left Vietnamese firms no choice but to purchase foreign peppers to make up for the shortfall, driving up pepper imports. 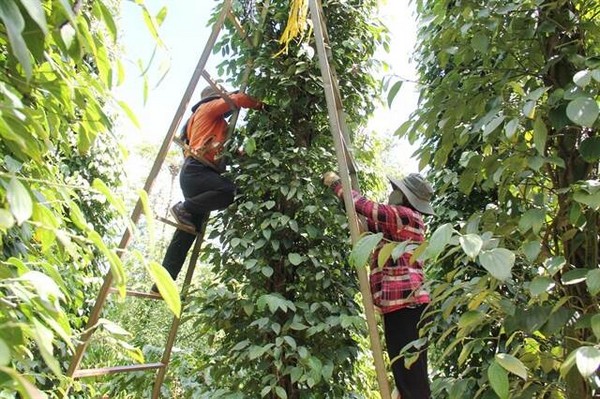 Le Thi Anh Tuyet, deputy director of the provincial Department of Agriculture and Rural Development in Bình Phước Province, underlined adverse weather conditions, pepper trees’ high age, and the negligence of farmers as the main causes for the crop failures.

Disappointment
“Years of falling prices have disheartened many pepper farmers. These farmers have become negligent of their crops, resulting in low yield,” she said.

The deputy director also noted that several firms bought peppers from farmers at prices higher than market prices to discourage them from switching to other trees.

Luong Thi Oanh, chairwoman of a cooperative in Dak Lak Province, revealed that her cooperative produced just 30-40 tons of pepper this year due to early rains, far less than the figure of 100 tons last year.

"Yields of our farms have dropped to one-third of last year," she said.

The chairwoman also remarked that low yields were not specific to her cooperative but could be observed in almost all farms in Cu Kuin District. Notably, numerous farms suffered production losses of up to 40 percent.

In February, a report prepared by VPA forecast that pepper production in southeastern provinces and Central Highlands, two key pepper-growing regions in Việt Nam, would fall considerably in 2022.

Notably, Đong Nai and Ba Ria-Vung Tau provinces were expected to drop by 20-25 percent in pepper output. On a nationwide scale, the drop was estimated at 10 percent.