Jade Garden is an important supplier of cucumbers to the local market in the South Island of New Zealand. At their glasshouses in Christchurch, the company emphasizes a safe environment for their employees and healthy conditions for their telegraph cucumbers to grow. For these reasons, the HPGen has been a natural match for the grower, and farm manager Robert Lindsay is enthusiastic about the results he’s seen so far.

Safety
The HPGen allows the grower to generate Peroxide UltraPure directly on-site, which means they don’t have to buy hazardous bulk peroxide anymore. “Staff is not handling a concentrated hazardous substance, and so this supports our commitment to creating a safer workplace”, Robert comments.

Simplicity
The HPGen is both easy to install and to use. It’s connected directly to both the greenhouse run-off water treatment system and the irrigation system, and the HP Now unit is monitored online to make sure everything runs smoothly. “Dosing hydrogen peroxide into the irrigation system happens automatically,” Robert explains, “no extra effort required.” 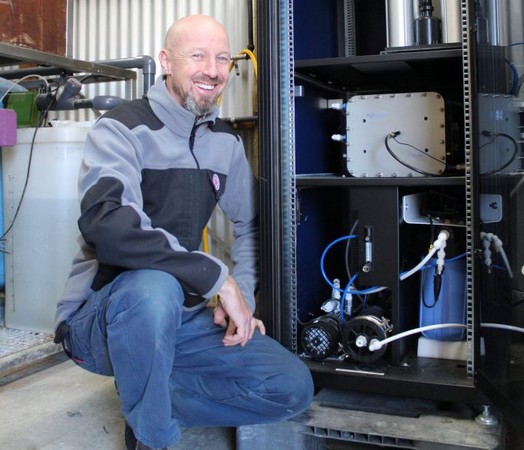 Cleaner irrigation system
Hydrogen peroxide is known to combat biofilm in irrigation lines, so Robert expected the HPGen system to contribute to a cleaner irrigation system. “I expected to see less biofilm in the irrigation mains, submains and laterals, but I was surprised at how quickly this occurred. In the first three weeks of operation I noticed the mainline filters blocking more frequently, which indicated that the biofilm in the lines was being oxidized by the peroxide. While altering a mainline recently, I noticed far less biofilm in the section I checked. This will likely continue until we have clean mains, submains and laterals”.

Oxygenation of irrigation water
Another added benefit of the Peroxide UltraPure generated by the HPGen system, is that it breaks down to pure water and oxygen. The extra oxygen molecule gives crops a boost, something Robert confirms: “I believe that any excess peroxide in the irrigation water will contribute positively to the oxygenation of the root zone.”

Treatment of drain water
Root health is very important when growing hydroponically, Robert notes. “Diseases such as Pythium can have a devastating effect on root health and thus production. All irrigation drain water from our greenhouses is dosed with peroxide and then left to settle before being passed through a UV unit. This double redundancy system means that if one of those two systems ever fails, then we still have coverage from the second. This will allow us time to fix the broken system.”