Todd Miedema, marketing director for Hudsonville, Michigan-based Miedema Produce, Inc. (which also has operations in Arizona to help supply radishes year-round), says that right now, winter radishes are coming out of both Florida and Arizona. California also has some radish production, as does Mexico.

“The Arizona and Florida season will finish at the end of the month and then transition to the Northern states including Minnesota, Michigan, and Ohio,” he says, adding that Canada also has radish production in the summer as well, largely out of Quebec. “Supplies are weather-dependent. Right now, there’s a very good supply of radishes available. Last year at this time, it was very tight, and markets were considerably higher.”

Strong demand as well
At the same time, demand for radishes is strong at this time of year, which features a number of holidays, including Easter, Mother’s Day, graduation parties, and more. However, he says today’s consumers eat fewer radishes than their grandparents did. “The big reason for that is today’s consumer has so many different choices now where to go with their dollar,” he says.

That said, consumption has steadied in the past decade, and radishes are becoming part of the healthy eating trend. “Salads are very popular, and people are finding out there are health advantages to root crops,” he says, noting the red skin on radishes, for example, contain gut health-boosting anthocyanins. 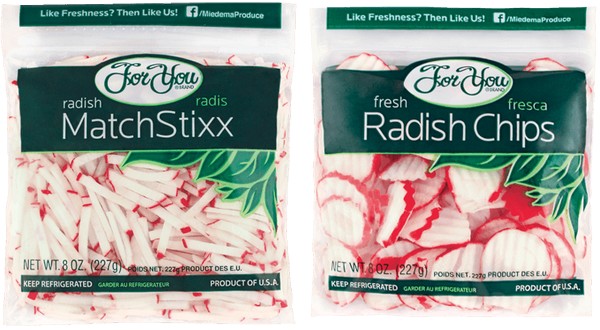 As for pricing, given the strong supplies, pricing is lower than last year at this time. “But due to the inputs that we’re experiencing, prices as an average are going to be constantly trending up. All the inputs that go into making that crop are going up in price dramatically.”