"We encase greenhouses in a layer of intelligence"

Earlier this year, Dutch tomato grower, Agro Care, expressed its desire to expand to a 1,000-hectare greenhouse by 2030. This Dutch company, which turns 25 this year, is distinct in this ambition. Just as is its 261-hectare acreage spread over four countries. Last month, Agro Care took another note-worthy step when, along with some colleagues in the greenhouse industry, they invested in the Dutch agtech start-up Source.ag.

Source.ag, based in Amsterdam, was founded in November 2020. At the helm are two software specialists: Rien Kamman (CEO) and Ernst van Bruggen (CTO). They have extensive experience in other branches, using artificial intelligence for decision support. Businesses, including a steel producer and aviation company, benefited from this. Then, thinking of their children, the men, both fathers, asked themselves where this powerful technology could be put to even better use—their answer: greenhouse horticulture, which provides the world with food on a large scale. Rien and Ernst quit their jobs and soon found themselves sitting around the table with Kees van Veen, CEO of Agro Care. 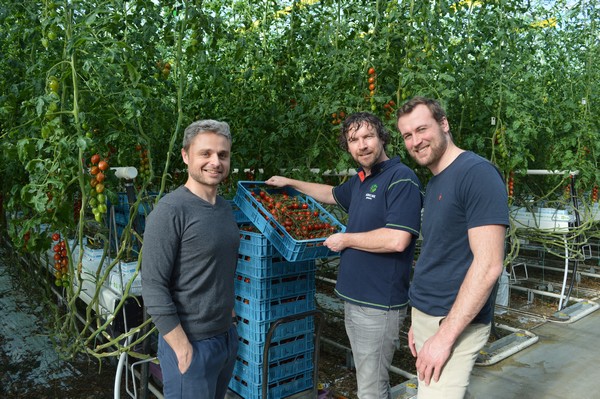 Rien Kamman, Paul Grootscholten, and Ernst van Bruggen in one of Agro Care's artificial intelligence-driven greenhouses with the help of Source.ag.

Taking decisions
The two men could not gauge Kees' impression of them at that first meeting. However, less than 18 months later, the tomato grower had invested in the software company. And he was not alone. The investment firms, Acre Venture Partners, E14, Astanor Ventures, fellow grower Rainbow Growers, cooperative Harvest House, and greenhouse builder Van der Hoeven did too - to the tune of a total of €9 million.

"Maybe it appealed to him that we come from outside the greenhouse industry," Rien says. "Also, we'd already built software for large companies in other sectors where making important decisions is a daily occurrence. Growers, too, have to turn many knobs when running greenhouses. We think that's really challenging in this sector. We have mutual respect and share a great curiosity. Agro Care fits well with us."

The software developers deliberately chose to listen closely to Kees' requests from the get-go. He, after all, represents their intelligent software platform's users. "We didn't quietly start building something only to involve the user at the last minute," says Rien. "We quickly went to see what the grower needed," adds Ernst. Last summer, the first version of the platform, developed by Source.ag, was already running in the tomato grower's greenhouse. Paul Grootscholten, location director of Agro Care's 55-hectare site in Middenmeer, the Netherlands, and company co-shareholder, says it took some getting used to. "As is the case with all new ideas, it always takes a while to win everyone over. In the end, however, growers often like innovation." 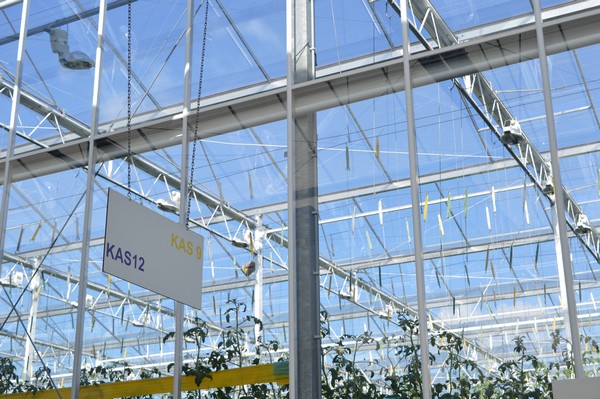 At the Wagenpad 11 site, site manager Paul Grootscholten manages 6 blocks of 9 hectares of greenhouse. Since last summer, decision support software from Source.ag has been helping him to do so.

Outside expertise
Right from the start, the Source.ag developers were looking over the grower's shoulder. Initially, at one, but gradually at more Agro Care and Rainbow sites. Now, the company already has almost 30 developers to do so. "Those people are from many different sectors, certainly not only greenhouse horticulture, sometimes even specifically not," says Rien. "They all bring their own specific expertise." The initial capital, raised in an investment round led by the American company Acre Venture Partners, will make it possible to introduce many more growers to the system. "That's a definite goal for this year. But, initially, we didn't want to have too many partners. We're still a start-up and prefer to focus. However, there's plenty of interest," Rien continues.

Sometimes that 'looking over the shoulder' was very literal, but often it was from a distance. "That took time and energy, but it's now paying off in a system for which we already have a lot of use," says Paul. "I like the challenge of ensuring everything on the system's dashboard is showing green." The branch director says everyone in Agro Care has a favorite part of the system. Paul likes to have an expansive overview.

"I manage six nine-hectare greenhouses. If one's humidity level falls, I know about it. Then I connect with the grower and his team, and we quickly solve the problem." The growers often have other requirements and favorites. "The system can, if needed, go into great depth," says Rien, coming up with a nice comparison. "Paul is like the airplane's pilot. He doesn't fly the plane by looking out of the window but by making the right decisions based on all the available data." 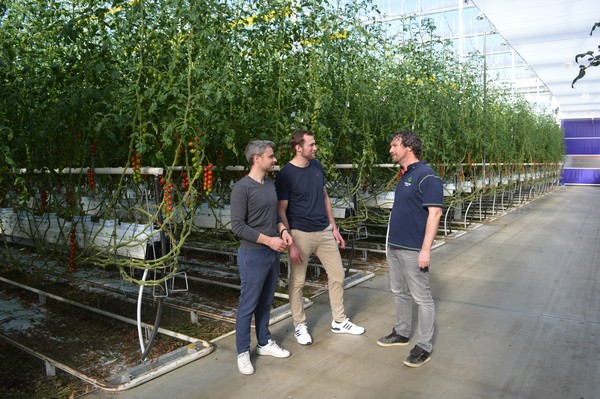 The people from Source.ag visited the grower on a regular basis to adjust the system to the cultivation practice.

Popping that pimple
Source.ag's system introduction coincided with energy prices starting to climb rapidly. Paul: "We're forced to farm more energy-efficiently. The dashboard supports us in this. In the end, you want the same, or an even better, result using less energy. More economical cultivation shouldn’t mean fewer kilos or a lower quality. Growers often still farm on instinct. You hear, 'it doesn't feel good in the greenhouse.' But that feeling means nothing. We've learned that since Source.ag has been helping us."

Paul's new digital colleagues are called Cyprus and Arthur. Cyprus is the artificial intelligence (AI) based planner that optimizes the company's cultivation strategy under constantly changing conditions. It simulates the balance between plant growth and, for example, water and energy usage. Arthur also uses AI to connect closely with all the systems in the greenhouse. Every day, it executes the cultivation strategy, adapting it to outdoor conditions if necessary.

"This winter, we limited our pipe temperature to a maximum of 45℃ and have run days at 17℃. A year ago, everyone would have thought we were crazy. We've started irrigating more discerningly. That's especially important since we switched the lights off more often this winter. Logically, when the lamps are off, there's less evaporation, but with this dashboard, everyone can now see this quickly and clearly. The Source dashboard is a huge mirror held up to you as a grower," Paul says expressively and then laughs heartily. "If you see a pimple, squeeze it." 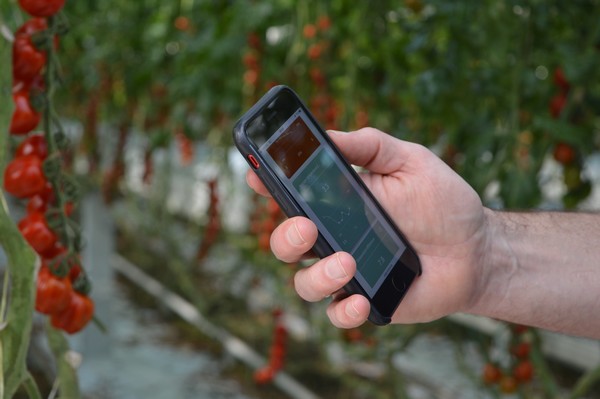 The grower receives daily feedback on the most important parameters in the greenhouse. When the measured results correspond to his optimal strategy, the tile turns green. In this way, the grower knows exactly what needs to be adjusted.

Optimizing a proven solution
These days, mentioning AI and software quickly brings automated farming to mind. That much-used term often comes into play in the high-tech greenhouse horticulture and vertical farming sectors. Investors are (also) very interested in the latter, which attracts new parties to food horticulture. Not Source.ag, though. They point out that greenhouse horticulture is a proven solution for large-scale, climate-protected food production. An increasing shortage of growers is hampering it. Nevertheless, Source.ag is not about automated farming.

Ernst: "We help growers optimize their results. And that goes much further than simply maximizing production. Nowadays, you have to deal with many dynamic factors like wildly fluctuating gas prices and tomato prices. Each decision growers make directly affects that, and that’s evident on the dashboard. Does one degree of extra heating still outweigh the turnover that additional yield achieves? Those grower questions are answered." Rien adds: "We enclose greenhouses in a layer of intelligence. That allows even slightly less experienced growers to optimize their cultivation. Growers like Agro Care can control their many greenhouses properly and efficiently." Paul agrees, concluding, "If you want to stay relevant, this is the future." 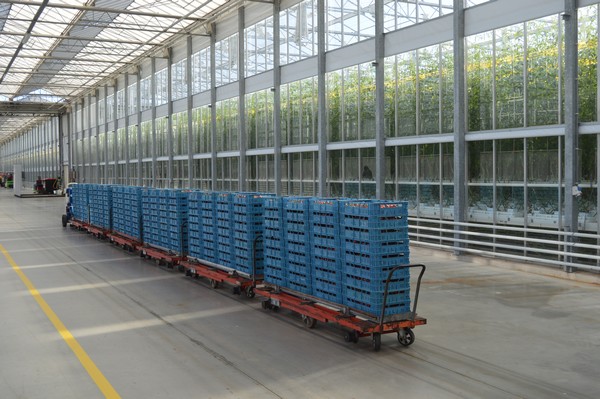