Auction prices for greenhouse vegetables fall further, to below the five-year average

The sharp decrease of the greenhouse vegetable prices in the week after Easter has, with the exception of aubergines, continued in week 17. Prices have dropped below the five-year average. This is apparent in new figures from the Federation of Belgian Horticultural Cooperatives. The Easter price decrease is also reflected in European tomato figures. 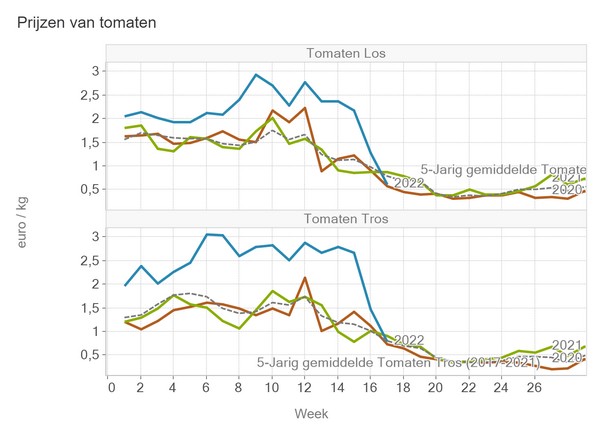 Figures compiled by the European Commission up to and including week 16 show that the fall in tomato prices after Easter was almost universal. Among the few exceptions are a stable price for cherry tomatoes in the Czech Republic, slightly increased prices for vine tomatoes in Greece and Italy, and an increase in the price of loose round tomatoes in Greece, all in week 16. With an average price decrease of 21% compared to week 15, the decrease in the price of loose round tomatoes is the largest.

Cucumber
The average price for cucumbers also went down again. Over the whole of week 17, an average unit price of just under 13 euro cents remains. Here too, the price is below average, although a glance at the figures from previous years shows that prices usually start to rise slightly from week 18 onwards. 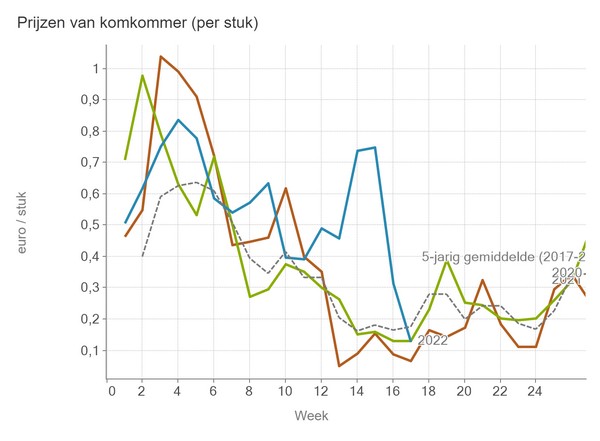 Peppers
Pepper prices are not that great either. Whereas the price of green peppers still rose in week 16, prices fell across the board in week 17. At just under 1.16 euros per kilo, green peppers are still the most profitable. Yellow and red peppers were sold last week for kilo prices of just over 50 euro cents. Half the price when compared to week 16. 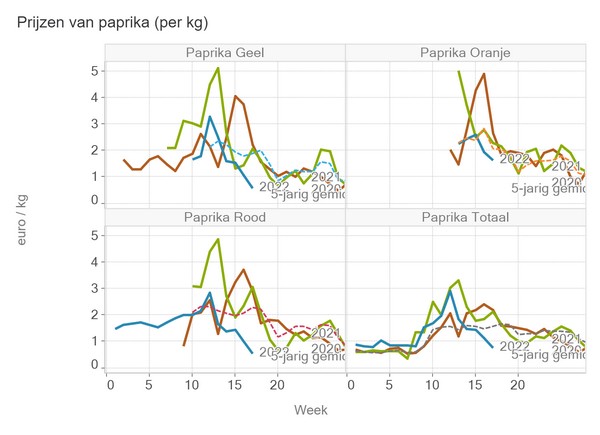 Aubergine, lettuce, and strawberry
As mentioned, only aubergines escaped relatively unscathed in terms of falling auction prices in week 17. At just over 60 euro cents per kilo, the price of aubergines rose slightly.

In week 16, the lettuce varieties had a lucky break. Last week, lettuce was also affected, and prices fell across the board. Once again, a kilo of Lollo Rossa from the greenhouse yields the most.

Looking at the strawberries, we also see that the average prices have decreased for this product. Across the board, the average price remains at just under 2.25 euros per kilo. Sonata yields the most.

Click here for all the VBT middle prices for fruit and vegetables for week 17.