A.D.I.VALOR and Plasticlean (branch of the Calvet Group) have formalized their partnership to create a new recycling unit for films used for agricultural production. With a capacity of more than 10,000 tons per year, this new unit will be able to recycle all the agricultural films used in France by 2023.

A unique process developed specifically for spoiled plastic films
Plasticlean has developed an innovative industrial process to clean intensively and efficiently the most soiled agricultural films in order to recycle them. The line includes a shredding, washing, and drying stage, followed by a packaging station that turns the flakes into bales of plastic. Recycling these used plastic films reduces the use of raw materials and the impact on the environment.

It is the first recycling unit in France specifically designed to regenerate this particular category of agricultural plastic films. This pilot project should be duplicated in other European countries that also use a lot of plastic films for agricultural production. 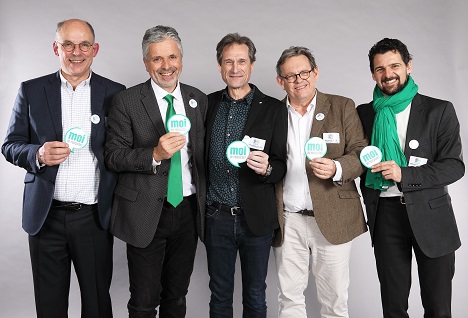 High-quality secondary plastic material
Plasticlean will produce recycled plastics based on LDPE (low-density polyethylene), which are flakes packaged into covered bales. These recycled materials can be directly compressed or extruded by plastic manufacturers. Given their extreme purity, they can be easily incorporated into the production of new plastic films.

“We offer the market a particularly pure plastic material, thanks to the efficiency of the procedure and the homogeneity of the agricultural films we receive, which are made exclusively of low-density polyethylene film,” explains Christophe Calvet, president of Plasticlean.

For Jacques Benaize, financial director of the Calvet Group, “Plasticlean represents an investment of 4.3 million euros [4.6 million USD] and the creation of 10 jobs at first. The unit should go into production in February 2023 and reach a production of 3,500 tons of secondary plastic materials in 2023.”

Increasing France’s recycling capacities
A.D.I.VALOR and its shareholders have embarked on an ambitious program to create four recycling units in France for agricultural plastics and packaging in 2022 and 2023 to increase and relocate the country’s recycling capacities. The unit was deliberately built in Vendargues, near Montpellier, for reasons of proximity. It is located at the crossroads of the two main agricultural production areas in the south of France. By aiming toward a reduced consumption of resources, Plasticlean positions itself as a new player in the circular economy in the French region of Occitania.

According to Stéphane Guesney, in charge of logistics and recycling at A.D.I.VALOR: “The choice of location for this new unit is really in line with our desire to reduce the environmental and economic impacts of transportation. We plan to have transit storage platforms for the batches collected in the more distant production areas, which will help us secure supply for the plant all year round.”

100% of agricultural plastic films recycled in 2023
Given the lack of recycling units available in France and Europe, disposing of the used agricultural films in Storage Facilities for Non-Hazardous Waste was, until now, the only possible treatment solution.

Thanks to the Plasticlean project, 100% of the agricultural plastic films used in France will be recycled from 2023.

“It is a real technological challenge because these spoiled films could not be recycled,” explains Pierre de Lépinau, general director of A.D.I.VALOR. “The French agricultural supply waste management sector is well on its way to achieving 100% collection and 100% recycling.”

For Luc Sytsma, president of the French Committee for Plastics in Agriculture, “this project really reflects the ambition of the ‘Agriculture Plastics Environment’ initiative:

- to contribute actively to the development of a circular economy that consumes fewer resources.”