Overall, traders were mostly satisfied with the demand for cucumbers. Dutch, domestic and Belgian snake cucumbers the market among themselves. This meant there was more continuity and the fluctuations in terms of prices and supplies decreased. The prices for domestic products fell again slightly due to lower volumes and converged to the level of Benelux imports. Spain participated only locally, with residual volumes.

In Frankfurt we came across a real speciality; The Urgurke "Jurassic", also called dragon cucumber. The fruits grow to a length of about 35 to 40 cm and have a weight of about 400 to 500 g. The batch brought in from Holland was packed in boxes of 30 and was expected to fetch €24.50. Mini cucumbers mainly came from domestic, Dutch and Turkish production. While Belgian supplies expanded in the segment, Spanish ones ended their campaign. Volume-induced slight price reductions had to be recorded here across all origins. 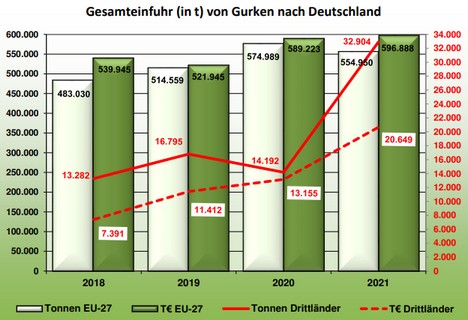 Apples
It was an uneventful week, with weakening demand. German products remained dominant in the market, above all Elstar, Jonagold and Boskoop, the former and the latter continued to decrease in volume.

Table grapes
Markets were adequately supplied with the predominantly South African and complementary Peruvian shipments. Supplies from Namibia continued to lose importance. On the other hand, new arrivals from Thompson Seedless, both from Chile and India, were added.

Oranges
The season is on the home stretch, although the quantities on offer were still quite considerable. Spanish Lane Late and Navelate continued to lose ground in terms of volume, while Egyptian juice oranges, Navel Late and Turkish Washington Navel, once again stabilized supplies.

Smaller citrus fruits
The season ended with weak interest and declining shipments of all origins. Even the sudden change in weather failed to give a big boost to business. The availabilities of Israeli, Spanish & Moroccan fruits were perfectly sufficient to meet the demand.

Lemons
Supplies from Spain remained limited due to weather conditions, yet they continued to dominate over Turkish offloads. Large Spanish fruits in 90s presentation could be accessed in Frankfurt from Thursday onwards.

Bananas
As a rule, the ripeners coordinated their supply with demand, so that little happened in terms of prices. From time to time, however, there were slight price reductions for second or third brands.

Cauliflower
French and Italian deliveries dominated the scene. The former expanded their overall supplies to the markets. Spanish and Belgian items supplemented the product range, but arrived only selectively. Deliveries from Spain were significantly limited this week.

Lettuce
Iceberg lettuce came in exclusively from Spain. The local presence was clearly limited; obviously, the increased demand from food retailers correlated with the harvest disruptions due to the rainy weather in southeastern Spain. Ratings increased significantly across the board for good and fresh qualities.

Tomatoes
Availability did not harmonize with the robust demand again this week and thus the market situation remained tight for almost all varieties. The price of panicle tomatoes, which are popular with buyers, rose again, with the majority coming from Spain, Turkey, the Netherlands, Belgium and Italy. German panicle and cherry tomatoes started to be marketed on the wholesale markets in Frankfurt, the former also in Munich.

Sweet peppers
The presence of Dutch and Belgian lots expanded. Meanwhile, the importance of Spain dropped off noticeably. At times, distributors tried to quickly accommodate Spanish items by means of discounts, which ultimately had a negative impact on the prices of Dutch products.

Asparagus
The markets were more than sufficiently supplied with domestic white and sometimes spears. Greece, the Netherlands, Italy and Belgium rounded out the trade with white and purple offerings. Although the season was still in its early stages, some quantities of domestic products were already available, thanks to double or even triple covers and good external growing conditions in recent weeks.