Bell peppers, especially red, yellow and orange, consistently rank among the top 10 most popular fruit both in North America and in European countries. It’s important for growers seeking to capitalize on the fruit’s popularity to understand the common challenges with growing this crop. Bell peppers have long cultivation cycles and are particularly susceptible to water stress, resulting in reduced fruit quality.

Moleaer’s nanobubble technology supersaturates irrigation water with oxygen nanobubbles, helps increase root health, allows the crop to absorb more nutrients and stimulates the growth of beneficial microbes while reducing the presence of harmful soil pathogens. To measure the effect nanobubbles would have on bell peppers, a trial was carried out at NovaCropControl, a Dutch research and test center.

Bell peppers are a consistently popular vegetable with consumers

The test lasted 20 weeks from May to October 2021 with a pepper crop under plastic. Results showed that the use of Moleaer nanobubble technology led to improved root health and growth, which is essential for a more vigorous crop that is also more resistant to stress. Compared to the control group, which had a root development score of 2.79 (out of 5), the roots of crops treated with Moleaer’s nanobubbles showed an impressive 3.25.

With better roots, the plants absorb nutrients faster and more efficiently. What’s more, faster cultivation time leads to more crop cycles per year. The test showed this resulted in a 30% increase in 1st-class fruit, which means more revenue for the grower. 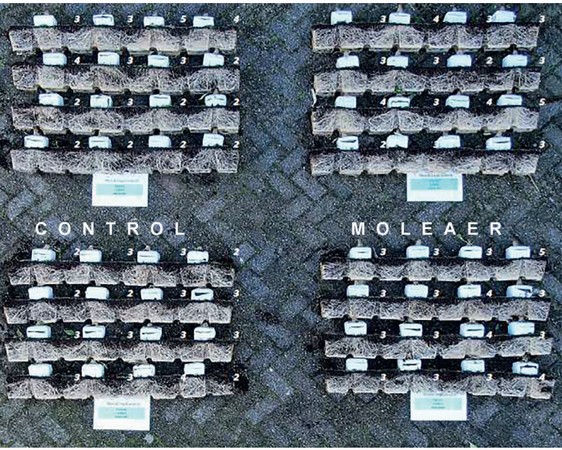 The fruit also reaches the harvest stage earlier, which can be an additional benefit for the grower. If planned properly, this can lead to better prices as the fruit hits the shelves earlier before orders are placed.

“For the second consecutive year, we see the benefits of using Moleaer nanobubbles to grow crops. We used relatively ‘clean’ water during the trial and the measurements indicate the vitality and yield of the crop improved significantly with the use of nanobubbles. We believe growers will have different results depending on the water quality used for irrigation,” added Koen van Kempen, of NovaCropControl.