University of Nebraska–Lincoln’s Andrea Basche and Samuel Wortman weren’t sure their idea of a new agronomy cover crop course would come to fruition.

“Sam and I were having a discussion one day about cover crops and we knew students were interested in the topic,” Basche said. “We also knew it wasn’t covered substantially in any other class.”

With a lot of time, planning, collaboration with other institutions and a $10 million USDA-NIFA CAP grant, their idea became a reality and they were able to offer a cover crop course like no other in the country.

Benefits of cover crops
Cover crops are plants grown primarily to slow erosion, improve soil health, prevent nutrient loss, increase water infiltration and water storage, smother weeds, help control pests and diseases and increase biodiversity and crop yields. They can be planted after or during harvest of a typical row crop and grow between seasons.

The USDA-NIFA five-year grant, titled “Enhancing the Sustainability of US Cropping Systems through Cover Crops and an Innovative Information and Technology Network” with teaching, research and extension components and on-farm cover crop research, started in 2019 and has over 90 collaborators around the United States.

“When the grant came along it was a great opportunity to build the course proposal into the education component and we started developing the course in earnest,” Basche said.

Wortman knew the process of getting a new class offered so they figured out a timeline and went through the steps required in time to offer Agronomy 425/825 Cover Crops in Agroecosystems in the 2021 fall semester. But that’s not to say it was an easy undertaking.

The course
In the beginning, Basche and Wortman distributed a survey to cover crop stakeholders throughout the United States to gauge the importance of various topics to include in the course.

It took two years to develop the course while meeting with seven other colleagues from six additional universities. Monthly meetings for the first year-and-half covered what topics the course would cover, the formula of the course and how they would all meet together. They divided the work among each other. This was new for both Basche and Wortman as they had never been a part of a multi-university course at this scale.

“The first 18 months were the hardest,” Wortman said. “We had this giant task that had to work for different universities, teaching styles, expectations, cultures and schedules.”

Once they started to figure out how the class would be structured, what video lectures and lab activities would work — they found there was a lot of information to teach. 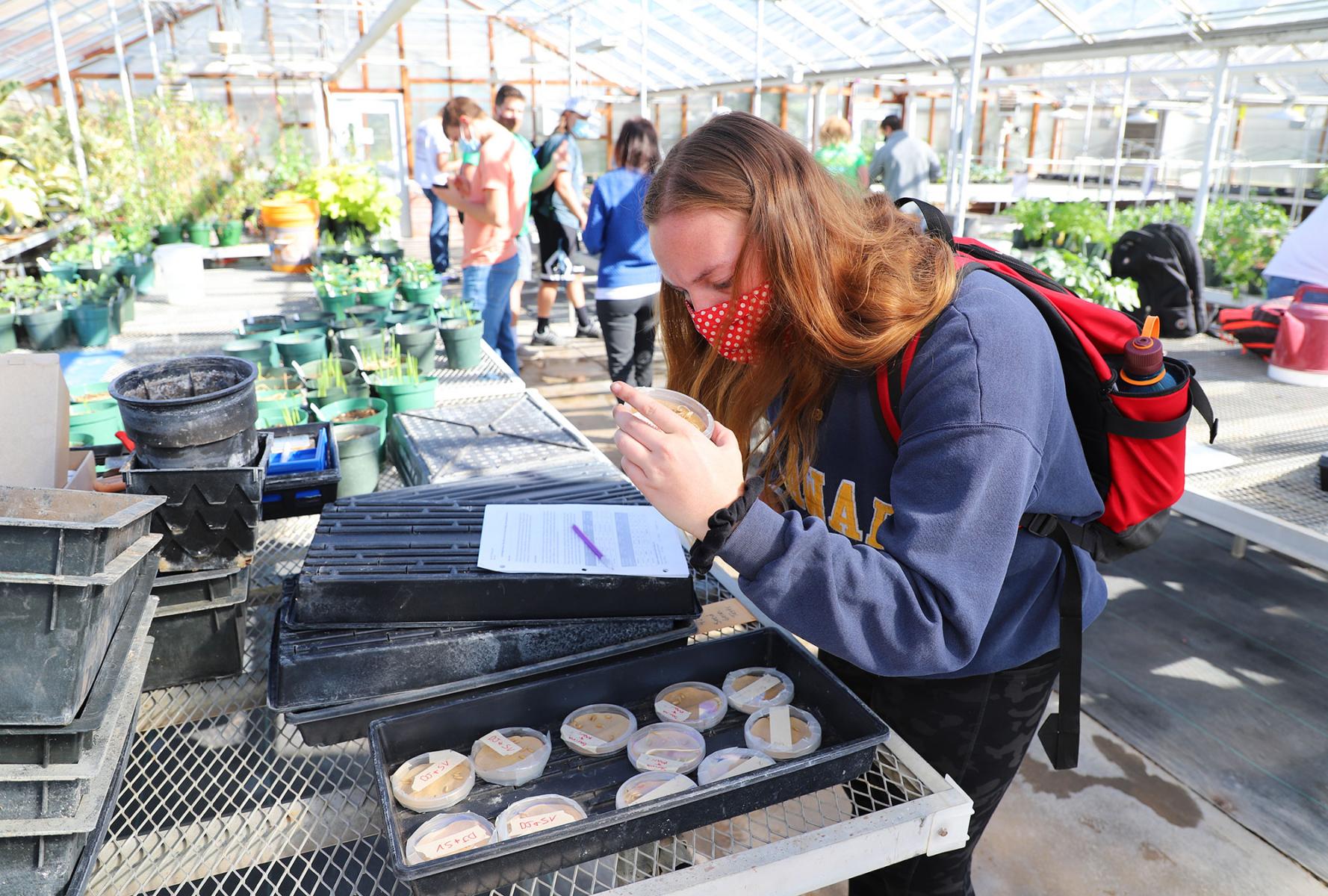 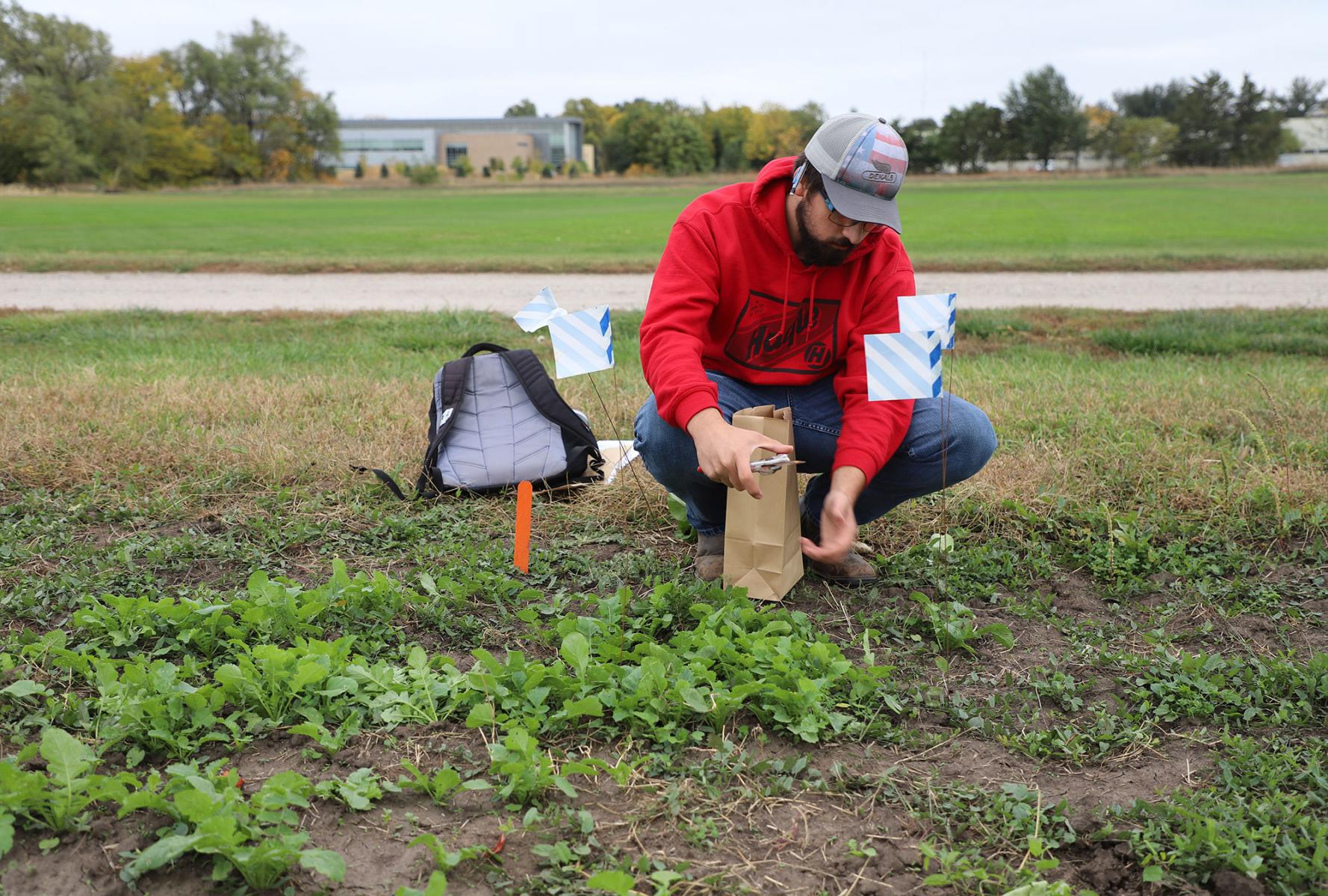 Dylan Anderson harvests his cover crop mixture from a research plot on East Campus during the Agronomy 425/825 Cover Crops in Agroecosystems class this fall.

In the inaugural class which began Aug. 30, there were 100 students total nationwide with 50 enrolled through the University of Nebraska–Lincoln — 33 online and 17 in person. Of the online students from Nebraska, many were resident students and it captured graduate students working from the university’s West Central Research and Extension Center. Students from all the universities met through Zoom each Friday for an hour.

The challenge
As part of the cover crop challenge, during the second week of class students designed a mixture of cover crop species seeds and then planted their mixtures in pots in the greenhouse and in 25 square-foot plots on East Campus. They competed against one another during the course of the class to see whose cover crop mixture produced the most biomass, the most biomass produced for the least amount of cost and resources used and had the best final balance of diversity.

For the students’ final project, they had to create a short- and long-term economic analysis of cover crops and account for all the costs. They had to come up with realistic estimates of the short- and long-term economic benefits and revenues. Students had to assign economic value to the weed suppression received, to the reduced risk in the system from building up soil organic matter and from more stable yield during a drought year. They also had to look at different scenarios of what profitable cover cropping looks like.

“In this class, we want to have students think about what the right combination of crops, cropping systems and cover crops are and the timing — there’s no silver bullet,” Wortman said.

Both Basche and Wortman agree the biggest benefit this course offers is lectures from nine different faculty and different institutions who are leading experts in cover crop science. The networking opportunities are also beneficial. The interaction with the other students can help build a national network of students interested in cover crops. Undergraduates have the opportunity to interact with different faculty about graduate school opportunities.

Moving forward, the plan is to offer the class every fall semester and include more institutions as already two additional universities have asked to be a part of it. 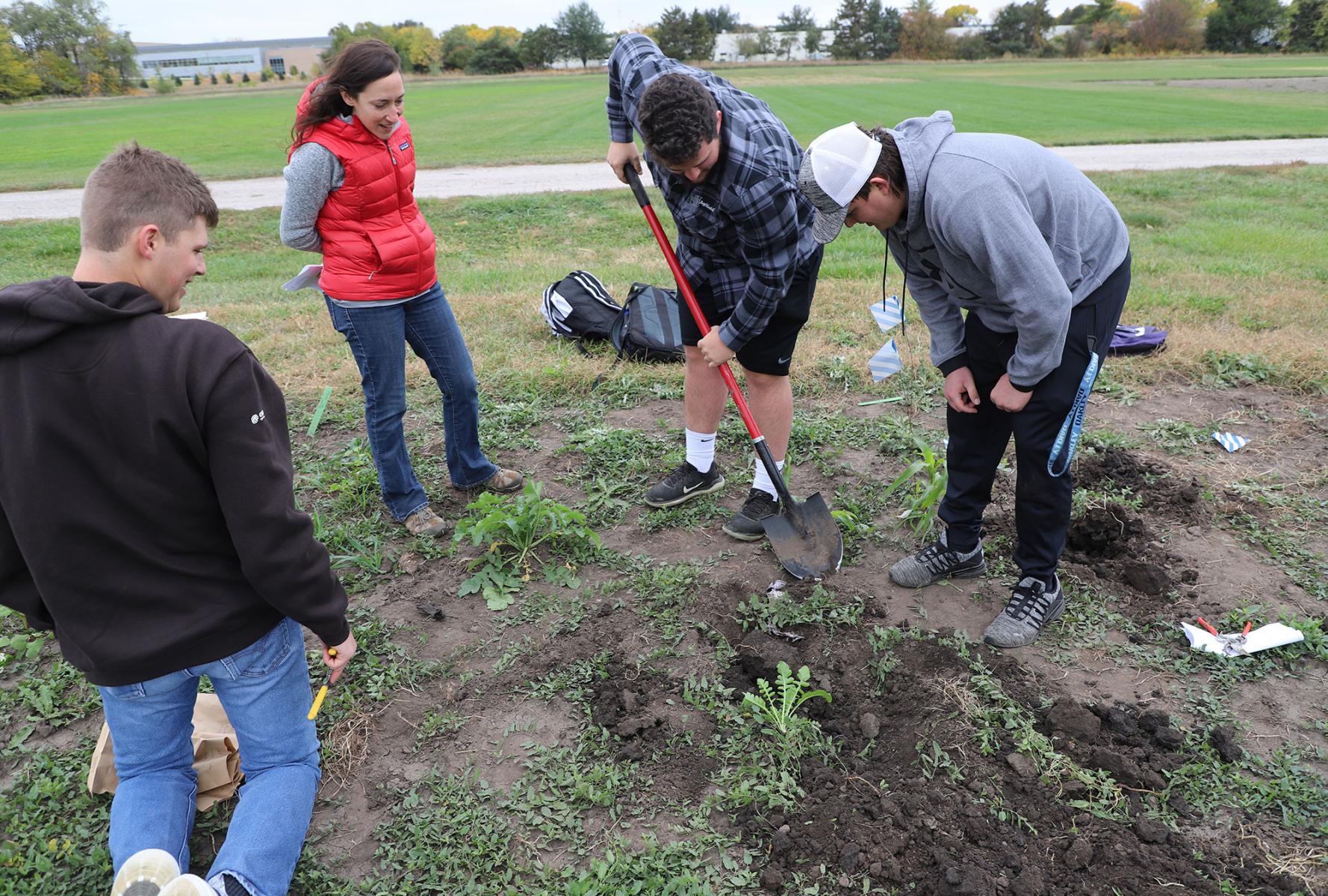 Assistant Professor Andrea Basche (second from left) watches as Chad Niemeier (from left), Brady Keller and Riley Huettner excavate what is left of white cotton underwear buried beneath their cover crop plots for roughly six weeks. The students were able to observe decomposition of the cotton over time. 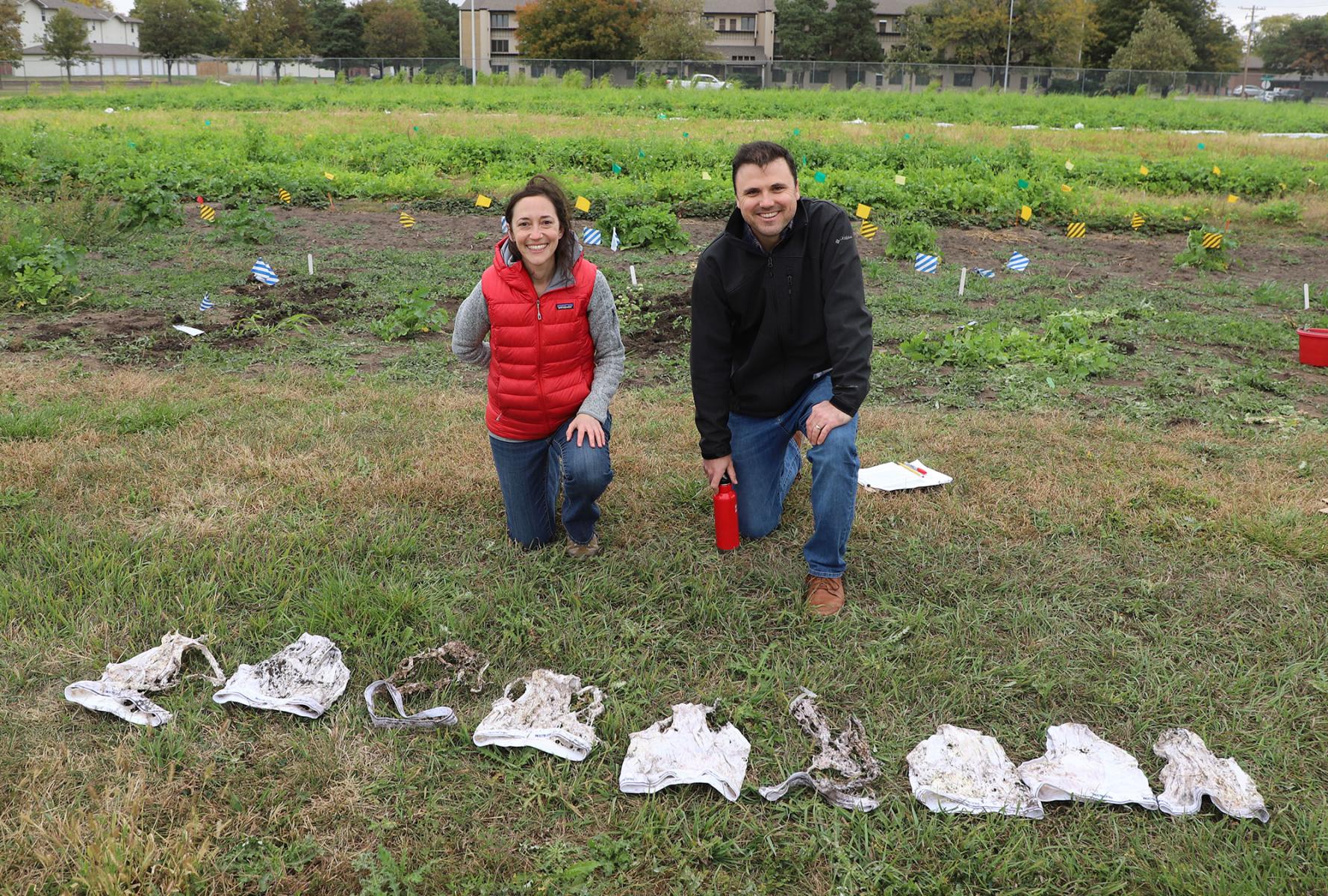 Course instructors Andrea Basche (left) and Sam Wortman are pictured with the underwear the students excavated from beneath the cover crop plots on East Campus. This fun activity showed the effects of microbial decomposition. Students also collected data to explore how their cover crop mixtures influenced weeds, insects, earthworms and soil nutrient cycling.

The ultimate goal of the class is to have more cover crops grown in the United States.

“I feel we will have more professionals, farmers and producers who have the confidence and knowledge to execute cover crops in cropping systems and be able to give that advice or implement it on their own farm,” Basche said.

Previous research
Utilizing cover crops is not a new concept, however, interest from farmers and producers has grown in the last 10 years. “Cover crops were the topic of my Ph.D. research that started in 2009 and it felt fringe at that point,” Wortman said. “Now it’s more mainstream.”

“There's a reason people have been doing things the way they have for a long time, like growing corn and soybean and having a winter fallow period,” Basche said. “Cover crops add this level of complexity and risk, but there's a lot of benefits too.”

Wortman said, currently, Nebraska cover crop usage is far from a majority of acres. Less than 5% but more than 1% of Nebraska as a whole, in dominant corn and soybean counties, utilize cover crops with some counties at 15%.

Climate, precipitation and soil all factor in to cover crop adoption. In Nebraska, there are hot spots of cover crop production in and around the eastern-central area of the state and west. Another area of high adoption rate is in northeastern and parts of south-central Nebraska. In the short term, there’s less risk of using cover crops as precipitation goes up. In Indiana, for example, where cover crops have been used, it’s easier to get into the fields with heavy rain in the spring. It allows farmers to plant, where before, it was impossible to plant.

“This course is teaching the next generation of producers how the short-term expense will be outweighed by the long-term benefits,” Wortman said.

Costs
The median cost of cover crop seed is $37 an acre. If farmers and producers don’t see a $37 return in that first year it can be hard to see the benefit. However, there are incentive programs to cost share and cover it.

“We want to have those incentive programs and cost shares in place for the first few years because most of the data is showing that farmers start to see benefits around year three and especially at year five,” Wortman said.

Farmers will plant cover crops after corn or soybean in the Corn Belt either through airplane application or with a drill after harvest.

“There’s a lot of creative ways to get the seed into the field so that it gets germinated and established prior to harvest so you get more growth in the fall,” Wortman said. “Some people are adapting combines to drop seed into the field while the combine is harvesting and there’s even drone application now that can spread seed.”

“Students want to try cover crops on their own farm or their family’s farm,” Basche said. “They know there are benefits. They also know there are challenges and they’re like, how do we make this work? How do we have our soil covered 365 days a year?”

Wortman and Basche feel through this class, students will be able to answer those questions and start using cover crops as a best agronomic practice. “I love teaching this class,” Basche said. “I think it's just the right time for it.”