Controlled-environment agriculture researchers at the Arkansas Agricultural Experiment Station are pulling a trick on nature to get blackberries to grow out of season.

Ponca, Natchez, Osage and about two dozen other varieties and selections of Arkansas-bred blackberries are being tested to see which do best in soilless substrate containers using the long-cane system. The blackberries are first grown outdoors in containers and trimmed to form long canes for easier management indoors.

Ryan Dickson, assistant professor of horticulture for the Experiment Station, the research arm of the University of Arkansas System Division of Agriculture, began an experiment in 2018 to determine the heat and light units needed to bring Arkansas floricane blackberry varieties to flower and fruit in a controlled environment. 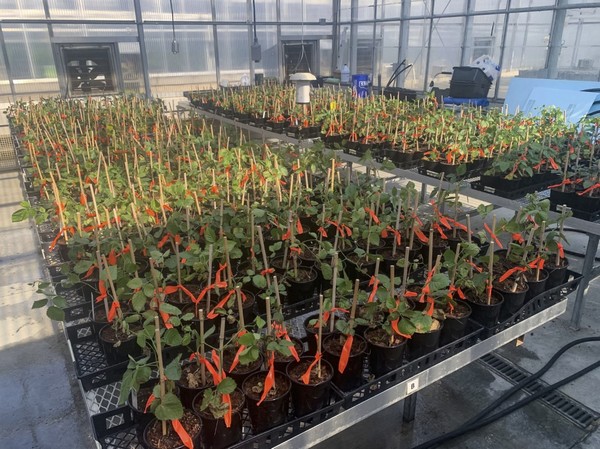 Now they are fine-tuning growth methods in a specific soilless substrate − coconut coir − and figuring out which Arkansas varieties perform well in containers. Although Arkansas fruit breeders have developed primocane blackberries that can fruit in one season, the varieties being tested are all Arkansas-bred floricane varieties that typically need two seasons to produce fruit.

Producing on demand
“The idea is we can bring frozen plants from a cooler into a high tunnel or greenhouse and force them out of wintertime to produce fruit on demand out of season,” Dickson said. “In the field, plants have to wait for natural conditions to warm up, so you are at the mercy of the weather in terms of when you harvest. Strawberries, blueberries and raspberries have been grown in substrates for years like this, but not blackberries. We are potentially vanguards in this area.”

About 30 selections and varieties from the Arkansas blackberry breeding program are in the long-cane, soilless substrate test at the Milo J. Shult Agricultural Research and Extension Center in Fayetteville.

Dickson said the main goals and potential benefits of long-cane blackberry production are increased yields, better fruit quality and consistency, and out-of-season production. The plants are stored at about 30 degrees to accumulate chilling hours for several months to trick the plants into dormancy. Plants can survive this cold storage for up to a year as needed, Dickson said. 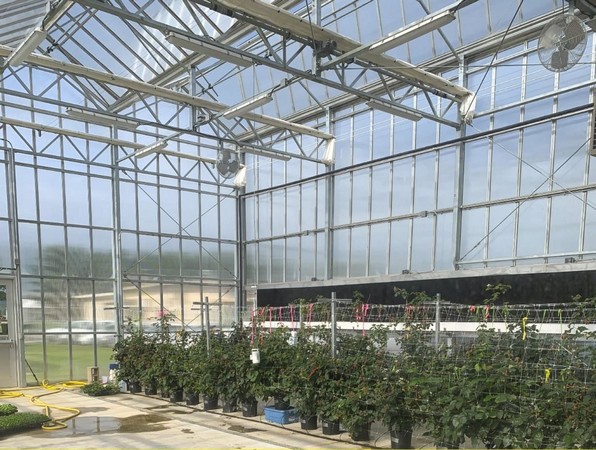 When the long-cane blackberry plants come out of cold storage, they are warmed back up to grow in a controlled environment with nutrient-treated water irrigation, a technique called “fertigation,” to get out-of-season fruit.

The final results of the study should be ready this summer. Researchers will evaluate yield and plant quality, sweetness and acidity, as well as the cost-benefit ratio.

“Yield is looking good, but there are a few simple cultural practices we can easily optimize to further enhance yield going forward,” Dickson said.

So far, some of the most valuable data has been from preliminary projects in 2018 and 2019 when Dickson tracked heat units and light units required for the plants to produce fruit and flowers. 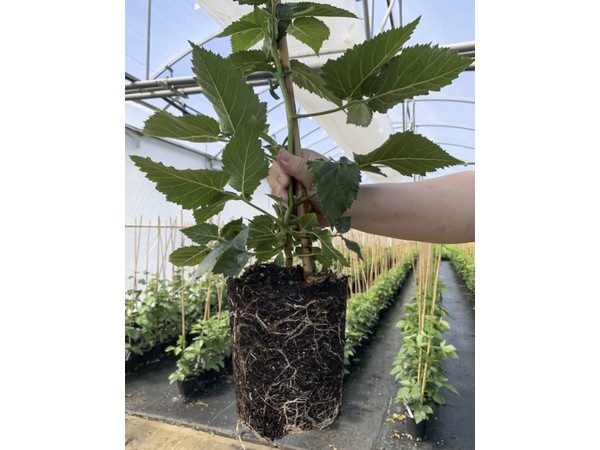 “We can use that in crop scheduling,” Dickson said. “It's a huge result and on the list of things to do for the Berries on Demand tool.”

Berries on Demand tool in development
Berries on Demand is a spreadsheet-style crop modeling predictive tool Dickson is developing in 2022 to allow a commercial grower to determine certain Arkansas blackberry varieties' flowering and fruiting dates in a controlled environment. For example, the blackberry variety Natchez is known to bear fruit early in the field, whereas Osage or Ouachita produce a little later. Dickson can precisely track how many heat units it takes to get that early crop in a greenhouse or high tunnel. It turns out Natchez does not need as much heat units to bear fruit.

In 2021, Dickson's team continued the long-cane soilless substrate research project in collaboration with the Division of Agriculture's fruit breeding program and two industry sponsors. Fruit breeders John Clark and Margaret Worthington recommended selections and varieties to put through the trial.

Other preliminary results from the study include learning which Arkansas varieties provide the best “leaf drop,” which will reduce labor when preparing the long-cane blackberries for cold storage with as few leaves as possible.