On December 31, 2021, Hongfu Modern Agricultural Industrial Park nearby Ulanqab City, Inner Mongolia (China) was officially opened. This glasshouse, covering an area of ​​300,000 square meters was created as another large vegetable supply to Beijing.

The first phase of the project of the Ulanqab Hongfu Modern Agricultural Industrial Park project began structural construction in early 2021. After nearly a year of intensive construction and production preparations, a 300,000-square-meter modern agricultural intelligent greenhouse base was built. It has gradually grown into a modern agricultural production, supply, and marketing complex with leading domestic engineering construction, industrial equipment and management and control technology, with a large scale, strong radiation force and long supply chain. It is expected that the annual output of fruits and vegetables will reach 12,000 tons.

Walking into the 16-meter-wide working passage, the greenery in the smart greenhouses on both sides is standing out through the glass wall. The first batch of red tomatoes, yellow tomatoes and other seasonal vegetables have been produced, with a daily output of up to 30 tons. By then, the fresh and high-quality fruits and vegetables produced will be transported to supermarkets in Beijing within 2 hours and will enter the tables of thousands of households through more than 2,000 brand supermarkets across the country. 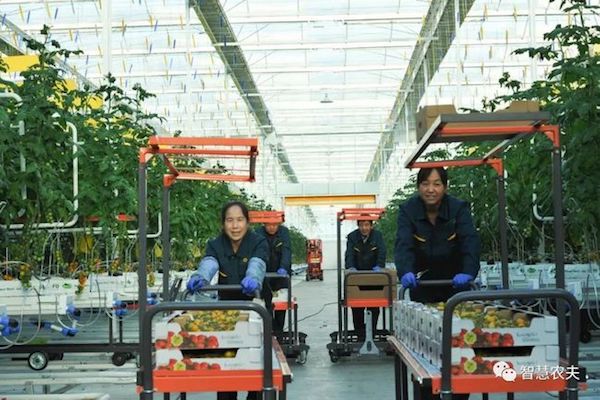 After more than a year of construction in 2021, Hongfu Group finally built the Modern Agricultural Industrial Park and put it into production. Hongfu greenhouse agricultural products do not use pesticides. They use scientific formulas to combine the cold climate of Ulanqab. The products produced have passed the EU global GAP standard certification, which means they are both nutritious and healthy.

In the next step, Ulanqab Hongfu Modern Agricultural Industrial Park will expand the smart greenhouse base to 1 million square meters. After the project is fully put into operation, a safe fruit and vegetable food supply guarantee base and a health care base will be formed in Ulan Qab with smart greenhouse facility agriculture as the core and serving the capital Beijing.