Spider venom for therapeutics and bioinsecticides

The venom of a single spider can contain up to 3000 components. These components, mostly peptides, can be used to develop promising drug leads for the treatment of diseases. Spider venom can also be used as a biological pesticide. A team of scientists from the Fraunhofer Institute for Molecular Biology and Applied Ecology IME and the Justus Liebig University in Giessen is primarily researching the venoms of spiders native to Germany, which have mostly been neglected until now. Their results regarding the biology of the toxins, in particular from the venom of the wasp spider, have been published in the journals “Biomolecules” and “Biological Reviews”.

Many people feel uncomfortable around spiders, some are even afraid of these eight-legged creatures. However, spiders are welcome at the Fraunhofer Institute for Molecular Biology and Applied Ecology IME in Giessen. Here, the biochemist Tim Lüddecke and his team are investigating spider toxins. “Spider venom is a largely untapped resource, reasoned by their sheer diversity – around 50,000 species are known. Spider venom has tremendous potential for medicine, for example as a tool to disentangle disease mechanisms,” says the head of the new “Animal Venomics” working group. 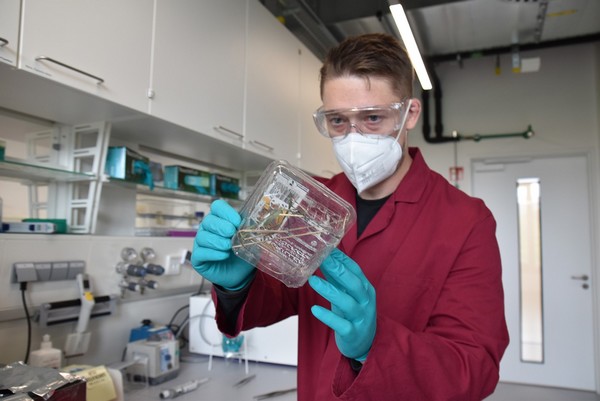 Accordingly, the actions of individual toxins on pain receptors in nerve cells can be examined in the laboratory. The venom cocktail from the Australian funnel-web spider is particularly promising. It is believed that it can be utilized to treat neuronal damage after strokes and that it may be used to make hearts last longer for organ transplants. Other components are interesting for usage as antibiotics or as pain relievers. “This is a very recent field of research. Although the substances have been identified and described, they have not yet reached the preclinical stage,” says Lüddecke. The situation is different with pesticide research. Spiders use their venoms to overpower their insect prey. As the toxins are very effective against insects, they feature excellent templates for biopesticides that could be used to protect crops against pest insects.

Research so far has focused on the venoms from large or potentially dangerous species that live in the tropics. The small and harmless spiders native to Central Europe were not the focus. “Most spiders in Central Europe don´t exceed two centimeters in body size, and their minuscule venom yield is insufficient for experiments. However, recently developed highly sensitive analytical methods enable us now to also examine the small amounts of venom from the previously neglected majority of small spiders,” explains Lüddecke. The working group at the institute branch “Bioresources” of Fraunhofer IME in Giessen is devoting itself to these species as part of a research project. Among others, they work with colleagues from the Justus Liebig University in Giessen. The work is funded by the LOEWE Center for Translational Biodiversity Genomics (LOEWE-TBG) in Frankfurt am Main.

A particular interest for the scientists lies in the wasp spider (Argiope bruennichi), which owes its name to its conspicuous wasp-like color. Recently they successfully deciphered its venom and thereby identified several novel biomolecules. The results of their study were published in the journal “Biomolecules.” 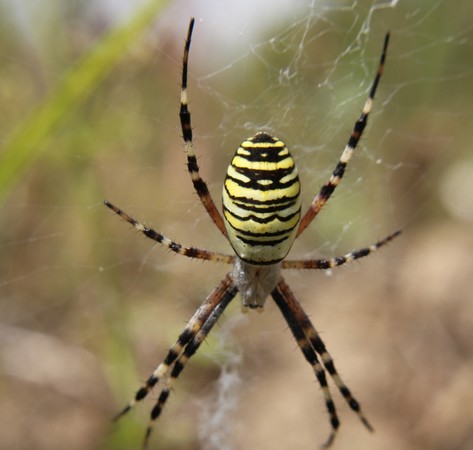 New biomolecules from wasp spider venom
Spider venoms are highly complex, and they can contain up to 3000 components. The venom of the wasp spider, on the other hand, only contains around 53 biomolecules. It is heavily dominated by high molecular components, including so-called CAP proteins and other enzymes. As in other spider venoms, knottins are present, but they only account for a small fraction of the total mixture.

Knottins represent a group of neurotoxic peptides which, due to their knot motif, are robust against chemical, enzymatic and thermal degradation. These molecules may therefore be administered orally as a therapeutic without being digested in the gastrointestinal tract. They can therefore exert their effects very well and are therefore of great potential for medicine. In addition, knottins bind specifically to ion channels. “The more specifically a molecule interacts with its target molecule, the fewer side effects it may trigger” explains Lüddecke. Furthermore, even the smallest amounts of these knottins influence the activity of the ion channels, i.e. they are effective in low concentrations. As a result, derived therapeutics can be administered in low doses. The combination of these properties makes spider venoms so interesting for science.

The project partners also discovered molecules in the wasp spider venom that are similar to the insect neuropeptides which are responsible for the transport of information between nerve cells. “We have found novel families of neuropeptide-like toxins that have not yet been identified from other spiders. We suspect that the wasp spider uses them to attack the nervous system of insects. It has long been known that neuropeptides in the animal kingdom are often repurposed as toxins in the course of evolution,” says the researcher.

Reproducing toxins in the laboratory
Since the venom yield is low in small spiders, the researchers remove the venom glands and sequence their mRNA. The toxins can be identified based on the gene sequence. The venom profile of the wasp spider has fully been recovered; the next step is to produce the relevant components. For this purpose, the gene sequence is incorporated into a bacterial cell using biotechnology, which then produces the toxin. “We are engineering genetically modified bacteria that produce the toxin on a large scale.” Lüddecke and his team have been able to mass-produce the main component of the wasp spider venom, the CAP protein. First functional studies will start soon.

The venom from male and female spiders is different
In another review, the biochemist, in cooperation with his colleagues from the Justus Liebig University in Giessen and researchers from the Australian University of the Sunshine Coast, was able to deduce that spider venoms are very dynamic and that many factors shape their composition and functionality. “The dynamics of spider venom have so far been severely underestimated. The biochemical repertoire is decisively influenced by life history stage, habitat and, in particular, sex. Even the venom cocktail of juveniles and adults is not necessarily identical. It is more due to the interaction of the many components that makes spider venom so effective, rather than the effects of a single toxin. The interactions between the components increase their effectiveness,” summarizes the researcher.