In 2021, Germany imported less fruit and vegetable than in the record year of 2020. Last year's imports reached 8.8 million+ tons. In 2020, that was 9.25 million tons. That brings imports to the same level as three years ago. Imports from Spain and the Netherlands determine this trend, according to Jan Kees Boon of Fruit & Vegetable Facts. 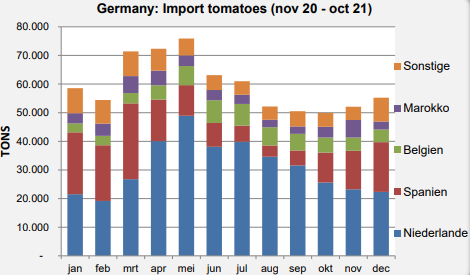 Spanish imports totaled almost 2.8 million tons in 2021. In 2020, that was 3.05 million. Last year's imports also lagged behind compared to 2019. But it will be about the same as in both previous years. Dutch imports shrank by about five percent in 2021. They were also lower than in 2019. Italy supplies the third-most fresh fruit and vegetables to Germany. There were also fewer imports from that country last year.

Two banana suppliers - Costa Rica and Ecuador - follow. Poland is in sixth place. Poland was one of the few countries Germany imported more from than before in 2021. Belgium, South Africa, France, and Turkey follow. There were fewer imports from all these countries too. Follows Morocco, which imported more in 2021 than before. With plusses, only Portugal and Mexico were exceptions among the smaller suppliers.

More bananas and mandarins
Bananas are Germany's top import product. That continued to grow in 2021. However, the country imported fewer of the other major products. These are tomatoes, cucumbers, apples, oranges, and watermelons. Besides bananas, mandarins are the only medium-to-large product whose import volumes rose last year.

Some less important products - volume-wise - saw an import growth in 2021. These are mangoes, leeks, ginger, asparagus, and celery. The growth in avocado and blueberry imports of avocados has ended (for now?).

That has been the case for several years. In 2021, that trade grew substantially (+16%). But, last year, there was also flow in the opposite direction. According to Eurostat figures, the Netherlands imported more than 100,000 tons of bananas from Germany in 2021. 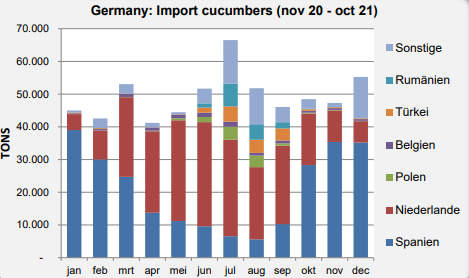 Few plusses in Spanish and Dutch imports
Besides bananas, Germany imported more of a limited number of products from the Netherlands last year. These included pears, leeks, and grapes. The minuses dominated Germany's Spanish imports too. However, in 2021, Hemnay imported more mandarins, salad vegetables, carrots, cauliflower, and celery from Spain.