What is VPD?
The VPD essentially tells how much moisture the air can hold during a certain temperature. The metric is used to measure how close the air is to saturation. The VPD is the difference between the amount of moisture in the air and how much moisture the air can potentially hold when it’s saturated. VPD can be a little bit difficult to comprehend if you’re unfamiliar with the term. It is usually measured in kilopascal (kPa). 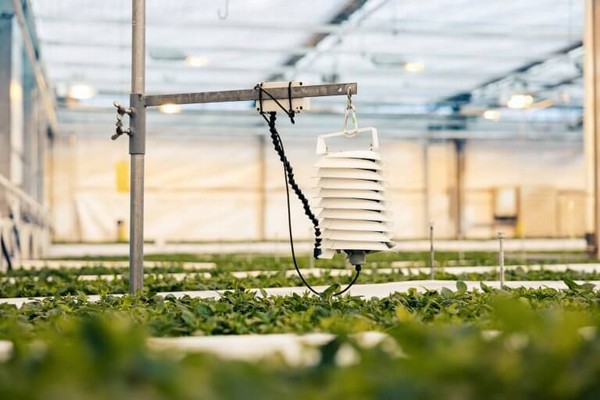 Why is VPD important in horticulture?
If the VPD is zero, plants can not transpire effectively. So the VPD is an important factor in creating an optimal growing environment. It can influence various key elements, which are connected to each other. As VPD increases, stomata get smaller, the uptake of CO2 decreases, the increasing difference in vapor pressures between the leaf and the air causes the crop to evaporate. The plant needs to draw more water from its roots.

All this combined, leads to more stress. And that could lead to a weaker plant. So VPD affects the plants loss of water (transpiration). Sometimes the air in a greenhouse gets too dry during the day. This can cause a plant to ‘turn off’. When the air is too dry, photosynthesis will stop to prevent the plant from exhausting. Photosynthesis is the process used by plants to convert sunlight, water and CO2 into oxygen and energy that is used for the growth. The crop will miss hours of daylight which leads to a decline in health. An optimum VPD can help in the prevention of mold and plant diseases.

Research in tomato production in 2017 showed that VPD regulation efficiently moderated plant water stress and maintained the plants water balance. The researchers concluded that when you regulate the VPD, you’ll be more efficient with irrigation.

What is the best VPD for my crop?
As with most metrics in horticulture, ideal VPD differs by crop and conditions. Optimum VPD levels depend on the growing phase. Researchers Heidi Wollaeger and Erik Runkle wrote an article about the use of VPD in greenhouse ornamentals and vegetables. They suggest: “Growers should aim to have fairly low VPD – for example 0.3 kPa – when rooting cuttings in greenhouses. This will reduce the drying of young plants, thereby reducing the frequency of misting and watering required to keep plants hydrated. However we recommend maintaining a VPD greater than 0.5 kPa in greenhouses while finishing plants. Especially when there’s a dense plant canopy. Plants will be able to transpire, cool themselves and be less stressed while the environment is less conducive to disease.”

Pointed Microclimate Sensor
Growers use Relative Humidity to understand the environment of a greenhouse or polytunnel and monitor growing conditions. In general, VPD is a better metric to use when you experience issues caused by humidity. According to research by the Michigan State University in the USA, VPD is more useful to measure than relative humidity. The researchers point out that VPD is independent of temperature. “When measuring plant transpiration and water loss, it provides greater insights than temperature and relative humidity on their own.”

In general, VPD is a better metric to use when you experience issues caused by humidity. “Vapor pressure deficit is a more accurate humidity measurement that takes into account the effect of temperatures on the water-holding capacity of the air, which is what ultimately drives transpiration of the leaf surface”, writes Maxium Yield.

In short: The effect humidity has on plants also depends on temperature. So just checking the relative humidity can’t always give you the most valuable insights. For a complete image you have to take VPD into account.

How to influence the VPD?
The math behind VPD is complicated. Don’t worry. You don’t have to spend hours calculating and juggling with numbers. We calculate the VPD for you. Together with growers 30MHz developed the Pointed Microclimate Sensor. This is a multifunctional sensor combination which measures various metrics like VPD, dewpoint and relative humidity. A lot of our customers use this sensor as their VPD sensor. Their experience is that this sensor calculates the VPD more efficiently than their climate computer.