Passive heating and cooling of a greenhouse

Passive heating and cooling techniques have been in use for centuries. They employ inexpensive techniques that substantially reduce heating and cooling costs while reducing your carbon footprint. Ridge vents work in tandem with eave vents and/or windows to either trap the sun’s warmth during the heating season or create cool airflow during the cooling season. A Solar Chimney can be used as both a heating and cool system, drawing air out of a room convectively through a chimney. Incorporating a Trombe Wall into a structure captures the energy of the sun during daylight hours and slowly releases it after the sun goes down.

During the heating season, all ridge vents, eave vents, and windows are closed. The operation of the vents can be automated to close once the desired temperature is reached. Low-E glass assists in harnessing the sun’s energy creating solar heat gain and warming the space. By opening the doors to an attached building, the excess heat can be transferred into the main living space, lowering overall heating costs. 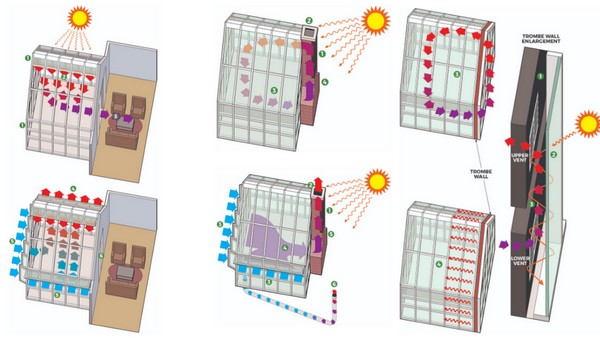 During the cooling season, the ridge vents are opened after sunset, creating an escape for warm air. As the warm air rises, cool, fresh air is drawn from windows or operable eave vents, lowering the cooling costs for that structure. To prevent cool air from escaping the main living space, the doors are closed to the attached structure during the day but can be opened during the night or early morning to take advantage of the cool, fresh air in the structure.

Solar chimney: heating
A chimney is constructed of an energy-absorbing material, such as brick or concrete. The south side of the chimney is painted black to optimize the absorption of the sun’s rays, increasing the air temperature inside the top of the chimney. The outside vent of the chimney is closed while the upper, inside vent is opened to the room.
Through convection, the ambient air in the room is drawn into the chimney. As the air rises in the chimney, it is warmed from the heat absorbed by the sun, and recirculated into the room.

Solar chimney: cooling
A chimney is constructed of an energy-absorbing material, such as brick or stone. The south side of the chimney is painted black to optimize the absorption of the sun’s rays, increasing the air temperature inside the top of the chimney. The outside vent of the chimney is opened to let air escape. Cooler, outside air is drawn either from windows or eave vents, that can be automatically controlled when the temperature reaches a designated point. Through convection, the ambient air in the room is drawn into the chimney.
The warm air escapes out the chimney.

For especially hot climates, an underground pipe can be installed that draws warm, outside air. Heat is exchanged through the cooler ground as the air travels through the pipe and into the room.

Trombe Wall: daytime & night time heating
A Trombe Wall is best situated on the southern side of a structure and constructed of an energy-absorbent material such as brick or concrete. It should be painted black to best absorb heat and incorporate upper and lower vents. On the exterior, a glazed wall should be built just inches from the masonry wall, creating a thermal buffer.

To create the highest efficiency thermal buffer, Low-E glass should be used to allow the energy of the sun to enter the space, but not escape.
For daytime heating, both vents are in the open position. Through convection, the ambient air in the room is drawn through the lower vents and into the thermal buffer where it is warmed as it rises to the upper vent and back into the living space.

For nighttime heating, the vents are closed to prevent warm air from escaping the living space. The energy captured by the masonry wall during the daytime is slowly released into the room through radiant heat.