“With reverse osmosis, we use hardly any tapwater”

"At Miljøgartneriet AS, we see our name as something we need to live up to,” says Simon Hansen, production manager at Norway’s largest high-tech greenhouse. The 77,000-square meter facility produces peppers, tomatoes, and chilis while also propagating plants for itself and other greenhouses.

As Simon explains, most Norwegian growers use tapwater originating from open reservoirs and rainwater. With such water comes its inherent biology which must be dealt with. When brought into the greenhouse and combined with nutrients and heat, the microbial populations can spike and effectively damage the crop and/or restrict nutrient availability in the root zone. To avoid this, Miljøgartneriet AS began supplementing its water supply with well water, which is pumped from a borehole, is drinkable but is not yet processed. Using well water, Miljøgartneriet AS was able to reduce microbial pressure in the irrigation water but struggled with high salinity levels upon water recirculation.

Sodium
“The amount of sodium in well water isn’t that high but when you’re recycling drainage water, the sodium quickly accumulates in the system. At first, we were able to have 25-35% drain water. As much as possible but in the calculation we were often prevented from using more because of an accumulation of sodium. Our fertilizer calculations were nearly impossible and our conductivity measures didn’t accurately depict the nutrient status,” explains Simon.

Due to its atomic size and ubiquity, sodium has a relatively high ionic strength and readily displaces other nutrients in the root matrix and substrate. High sodium levels in the leachate also resulted in a solution with a high EC, implying that the solution still contained high nutrient levels. To address these challenges, Miljøgartneriet AS installed a high-performance reverse osmosis system (Nexus HPRO) offered by Van der Ende Groep. 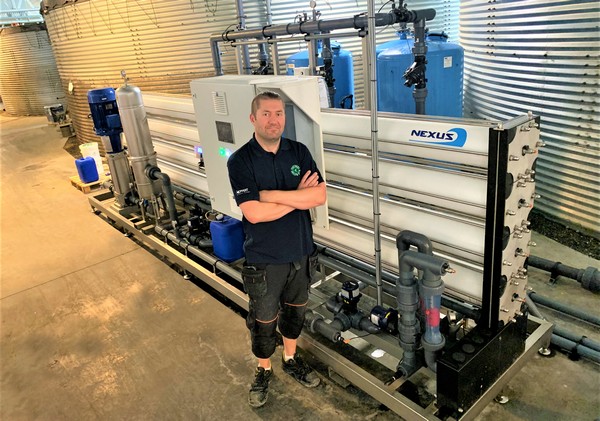 “We installed the system in winter 2020 and with it, we hardly use any tap water and can use more drainwater than before- roughly 50%. Having a filter like that allows us to pump less water, which is good for the environment, our costs, and the depreciation of the investment,” says Simon.

Aside from reducing pumping requirements, the Nexus HPRO system installed at Miljøgartneriet AS facilitates nutrient monitoring by ensuring that the feed EC is solely based on crop nutrients, not sodium. Further, Simon has noticed that there is a lot less dirt and particulate accumulation on drippers, automatic mixers, filters, and misting systems since the HPRO installation.

Ruud Schulte is responsible for the water treatment department at Van der Ende Groep. He adds:  "The Nexus High-Performance RO at Miljøgartneriet AS achieves recovery of 92% whereas a conventional one would achieve between 70-75%. The biggest advantage is that he needs less water for the same amount of production and this results in much lower operating costs."