"A great example of Canadian and Dutch companies building together"

It’s been 5 years since Andrew Hendrik’s and Havecon’s last project together. This time, Havecon will be building a 1.3ha project for Hendrik’s Greenhouse to meet their ever increasing market demands while giving them the space to streamline production and maximize overall efficiencies. Hendriks Greenhouses was established by Andy Sr. and his wife Helan Hendrik’s in 1967. They started with a vision and passion and through hard work and perseverance, they steadily grew the business to become be a staple in the Canadian Floral culture sector. Then in the late 1980’s, Andy Jr and Rick took over the company from their parents and continued to expand and grow business based off the fundamentals learned from their parents. The company has continued to grow and become one of the market leaders in the Flora value add sector. 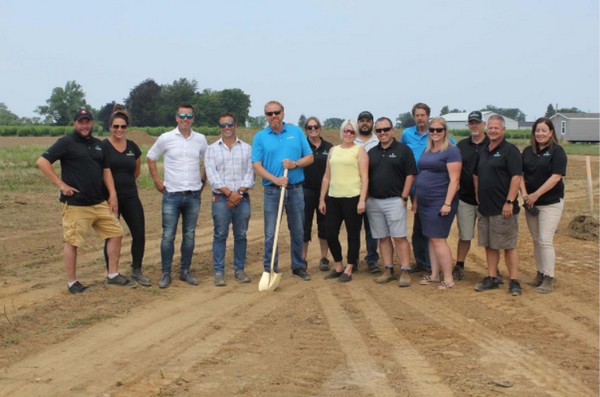 Andrew Jr and Rick Hendriks with Members of Hendriks management team as well as Henk Verbakel and Jon Adams from Havecon Horticultural Projects.

"Hendriks are known for quality, integrity and ability to quickly pivot to the ever changing floral market, being designers of indoor gardens and value added upgraded foliage and flowerings for the mass market, as well as independent retailers and this new greenhouse will help to fulfill their ever increasing needs. Andrew Hendrik’s Jr and his team pride themselves on being a solution provider for retail potted plants, concentrating on design, quality and execution", the company says.

Hendrik’s latest greenhouse will be one of the most state of art floral culture greenhouses in Ontario, Canada. Working with Havecon, they will start construction in late summer and will have the first plants in production by March 2022.

"This is again another great example of Canadian and Dutch Companies working together with a common goal in mind," Hendriks concludes.