Partnering key to success for profitable horticulture in Gulf region

“Above all, growers in the Gulf region need to partner with other companies. There is no way of doing it all by yourself. The market is not large enough to have one big greenhouse growing just one variety. To enhance local production here, many partners have to come together," says Sky Kurz with Pure Harvest Farms. He explained the role of horticulture in the Gulf economies during the webinar “A one-stop solution to feed the world #3” that focused on food production in the Gulf region.

This webinar series, offered by amongst others Dutch Greenhouse Delta, GreenTech, and World Horti Center, in previous editions, focused on China and the US. However, the Gulf region, with its harsh climate and water scarcity, proves a true challenge for even the most technologically advanced companies.

Erik Smidt, agricultural counselor of the Kingdom of the Netherlands to the Gulf region, explained the case of the region in general. Food security is an important issue for all countries, and horticulture and agriculture, therefore, have received much attention lately. Whereas Oman has a history in horticulture, Saudi Arabia is relatively new to the industry. But all countries have stimulated investment in horticulture from private and public parties. Dutch companies have played a big role in recent developments. Big projects have already started, especially in Saudi Arabia, where Wageningen University has recently been involved in the construction of a big research greenhouse. Also, retail chains are looking for local products to satisfy growing consumer demand. 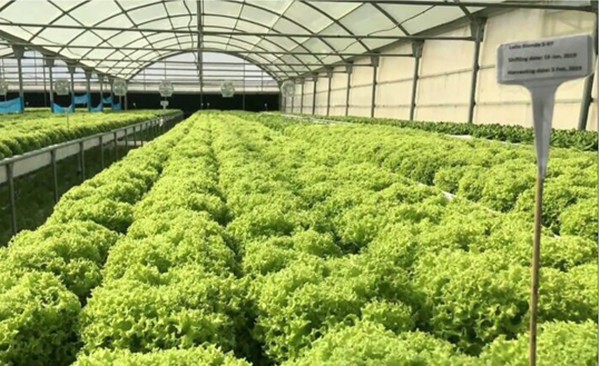 Greenhouse in the UAE

Collaborating on water use
The Netherlands Water Partnership (NWP) is a network of over 180 companies, knowledge institutions, NGO’s and governmental organizations. They aim to co-create transformative solutions for water-related challenges. Although our planet is blue from space, the amount of freshwater available is very small. And in many countries, over 70% of the freshwater available is used for agriculture. Examples of solutions that NWP works on are smart irrigation, dealing with salinity, groundwater management, and drainage.

Marijke van Liemt, manager of international business NLinBusiness: public-private partnership highlighted the opportunities for Dutch entrepreneurs to expand abroad. Their “one stop shop” platform offers solutions such as matchmaking events with local investors, providing information about the region for products, and mapping the regulations companies have to deal with. Like Bianca, she stressed that public-private partnerships are essential to a successful business.

Partnering is essential
One of the recipients of such a cooperation, Pure Harvest Smart Farms, has started growing only four years ago. “Nobody believed our plan was possible,” the company’s CEO Sky Kurtz says. Because of the capital-intensive industry, no mistakes can be made. 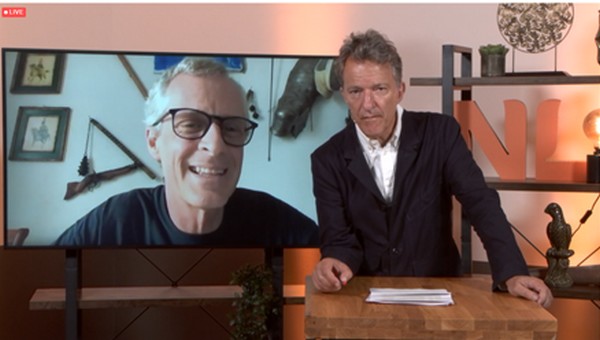 The moderator, Frederik Vossenaar, with one of the speakers, professor Mark Tester

“You need so much knowledge under one roof. In fact, getting the right team was one of the pivotal parts of our investment plan.” Sky’s background as a technology investor helped him to pick his battles wisely. “The biggest problem here is climate, so I zoomed in to that. What would it take to tackle the climate issues while using the sources of energy such as sunlight and CO2 available?” Sky’s solution is a hybrid greenhouse, that functions both as a vertical farm and as a greenhouse, depending on whether the roof is open or not. Depending on the weather, the circumstances are created in the most energy-efficient way. “I am a great believer in the idea of buying what you can and building what you must. In this co-creative project, we stood on the shoulders of Dutch giants.”

Head grower of Smart Harvest Farms, Jan Prins from the Netherlands, couldn’t agree with this more. “If you invest on such a high level, everything should be right. We, therefore, combined Dutch knowledge with local expertise to get the best possible result in this context.” 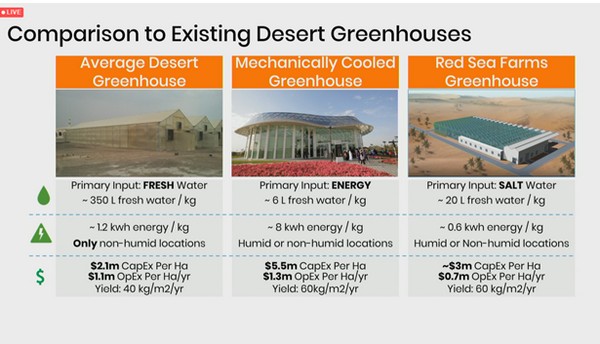 Growing with saltwater
Finally, Professor Mark Tester, co-founder of Red Sea Farms explained the business model behind his company. Red Sea Farms builds scalable agriculture systems, powered by salt water and sunlight. As the Gulf region has exceptional light levels for growing plants and generating power. As a spin-out of King Abdullah University of Science and Technology in Saudi Arabia, the company uses the newest technologies to create salt-tolerant crops. Their initial focus is salt-tolerant tomatoes. They also capture humidity excess to be reused. By cooling during night time, the Red Sea Farm greenhouse can reduce much on energy usage as mechanical cooling eats large amounts of energy.