Have you ever wondered how a cauliflower grows into its strange shape? - The mystery of how this peculiar shaped vegetable forms has now been solved by a team of mathematicians and plant scientists.

Experts from the University of Nottingham worked in collaboration with and international team led by CNRS1 and Inria on the study that revealed that cauliflowers, and Romanescos in particular, are in fact buds that are designed to become flowers but which never reach their goal. The findings have been published today in Science.

The research combines mathematical modelling and plant biology to show that instead of reaching flowering stage cauliflowers develop into stems, which in turn continue trying to produce flowers. The cauliflower is born from this chain reaction, resulting in a succession of stems upon stems.

This study shows that the brief incursion of buds into a flowering state profoundly affects their functioning and allows them, unlike normal stems, to grow without leaves and to multiply almost infinitely. The atypical shape of the Romanesco is explained by the fact that its stems produce buds more and more rapidly (whereas the production rate is constant in other cauliflowers). This acceleration gives each floret a pyramidal appearance, making the fractal aspect of the structure clear. The study highlights how the selection of mutations in plants during the process of domestication has changed their shape, sometimes drastically, into the fruits and vegetables on our shelves. 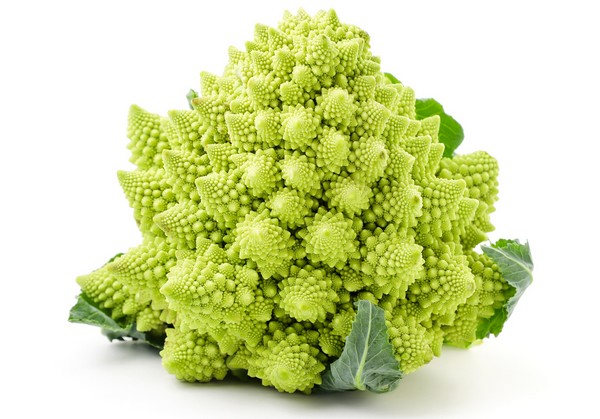 Multidisciplinary research
"After over a decade of collaborative work from a multidisciplinary and international team of researchers, this emergent process can finally be explained. Although most plants present a geometric organization in spirals along main and secondary axes (called "phyllotaxis"), cauliflowers present an unusual phyllotaxis with a multitude of spirals, nested over a wide range of scales. How such a fractal self-similar organization emerges from developmental mechanisms has, until now, remained elusive," said Assistant Professor Etienne Farcot, one of the mathematicians who initiated this research project.

"Combining experimental analyses in Arabidopsis thaliana cauliflower-like mutant with mathematical modelling, we found that curd self-similarity arises because growing plant tissues fail to form flowers but keep the “memory” of their transient passage in a floral state. Understanding this genetic mutation could help plant scientists optimize growth of related plants."