Icelandic Lambhagi on a hydroponic adventure

Early in 2020, Lambaghi, Iceland’s largest grower of fresh lettuce and leafy greens, implemented an expansion of its operations. Since their existing setup consisted of the Ellepot Propagation System for Hydroponics, the company’s new expansion, a 20,000 square meter complex, features the new Ellepot Greenleaf System for hydroponics. The Ellepot Greenleaf System is a specially designed machine that enables growers to fill pots directly into gutters, creating significant savings on logistics, a perfect match for an expanding operation such as Lambaghi.

A customized sustainable setup
Icelandic people are known for their ability to apply sustainable practices in their everyday lives. A great example is a tradition of baking bread in warm sand heated from the island’s volcanic activity. Living on a relatively isolated island has developed this mindset of ensuring all resources are carefully utilized. 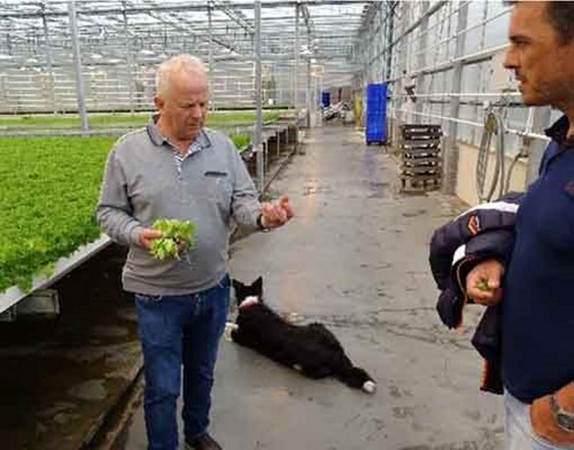 Hafberg Þórisson, who founded and owns Lambhagi, shares this trademark Icelandic mentality. When he first started his company, no system was available to fit his vision of a hydroponic farm, so he took matters into his own hands. Even though he is not a trained engineer, he designed the machinery he wanted, hand-drawing the plans with a pencil and ruler. A team from Ellepot’s technical department in Denmark helped him design and refine the machinery he wished for, providing him with his first set up for hydroponic farming.

Automation increases financial sustainability
Machine automation may be a necessary solution in situations where labor is either very expensive, less available, or could be better or more efficiently utilized elsewhere in the company. With the Ellepot System, automation helps the producer achieve a reliable production setup where costs are controlled, keeping prices down, critical for a company competing with cheaper imports.

Ellepots for hydroponics are cheaper and logistically easier to handle than the “conventional” plastic pot. When the COVID-19 pandemic impacted Lambhagi’s production, efficiencies gained by the integrated Ellepot technologies enabled the company to continue its work in a financially sustainable and secure way. Here, as a measure against possible financial challenges, their product selection was decreased, while automation on the production line had been increased – a good move considering the company’s new expansion.

Environmental sustainability
Protecting the environment is one of Lambhagi’s top priorities. Guided by the UN’s 17 Sustainable Development Goals, the company has taken several steps to mitigate its environmental impact. For instance, water used for irrigation in greenhouses is filtered and recycled. Lambaghi further reduces its impact on the environment by using Ellepots to reduce the total plastic used for a more environmentally friendly growing system.

According to Hafberg, the company’s carbon footprint was recently calculated to be a low 1.11 kilos of CO2 equivalent per kilo of lettuce. All Lambaghi produce (starting in the Fall of 2021) will be labeled with its carbon footprint to help consumers make a more informed decision with respect to environmental issues, thus continuing Lambaghi’s sustainability journey.

Lambaghi is meeting the retail and end-consumer demands of reduced reliance on plastic and lowered CO2 emissions and have rightly received multiple awards for their innovative growing methods and commitment to sustainability. One notable award being the energy company Orkusalan’s Green Light Award for sustainable energy in 2019.

The Ellepot Greenleaf System for hydroponics was implemented at just the right time for Lambhagi to make it through the global crisis, ensuring the company’s sustainability even through this difficult time. The development of this system has been an inspiration for growers in other countries that are now using the same system.