another award for YOOM

A new Israeli black tomato from Gedera Seeds was selected by judges at the Fresh AgroMashov 2021 Agriculture Exhibition as this year's top tomato.

The tomato is noted for its distinct appearance and taste. It was highlighted at this year's Fresh AgroMashov exhibition (mashov is Hebrew for "feedback") in order to raise awareness and encourage consumers to buy local rather than imported tomatoes. 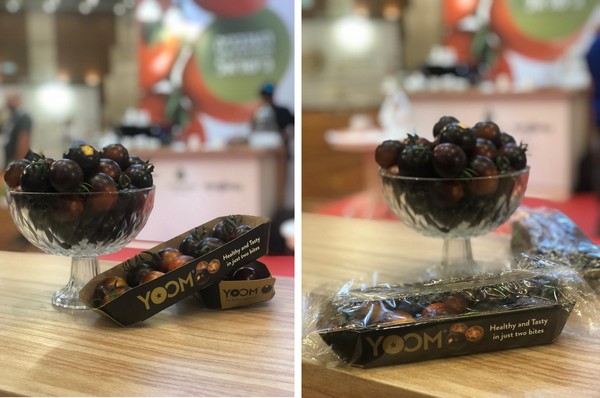 The tomato was developed by the Gedera Syngenta seed company, which is also known for other unique varieties of tomatoes, including a new sweet-sour strain. The black tomato has also been called "a favorite" of Israeli chefs due to its size, texture, crispness and juiciness, and its infusion of vitamins, minerals and anthocyanins – the substance in plants that give them a dark color: red, purple, blue or black.

Jerusalem Mayor Moshe Lion remarked on the innovation of the tomato, saying while visiting the exhibition hall that he "was very impressed by the innovations presented" and that "the city of Jerusalem is proud and happy to host this important exhibition."

Agriculture Ministry Director-General Nahum Itzkowitz also noted the significance of promoting Israeli produce, saying that "local production is of great importance for maintaining food security. We as a country must maintain the production capacity of agriculture, improve productivity in agriculture, invest in R&D and innovation, and ensure smart importation according to market conditions."

Read the complete article at www.jpost.com.