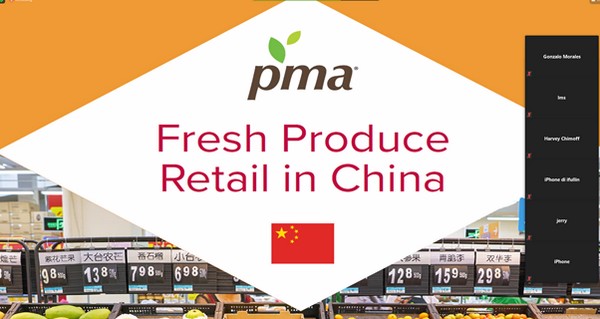 At the beginning of the session, Mr. Mau Wah Liu, the chairman of Joy Wing Mau group, welcomed everyone, followed by Dan Siekman, the researcher and operations consultant at MZMC, who first gave a speech on ‘Online and Offline Fresh Produce Retail in China’.

“China’s fresh produce retail market is impressive not only for its present scale but also its vast potential.” Dan states, “The market value for fresh produce was $407 billion in 2019. But when viewed from a per capita perspective, retail spending on fresh goods was only $291. Though relatively small, it shows there is much space for growth. At the moment, 48% of sales are through traditional market channels. There is a lot of room for restructuring fresh produce and retail sector.”

“Under prevailing economic conditions, China’s fresh produce retail market is poised for strong growth in the coming years. Much of this growth will come via various forms of e-commerce, especially grocery home delivery services.” 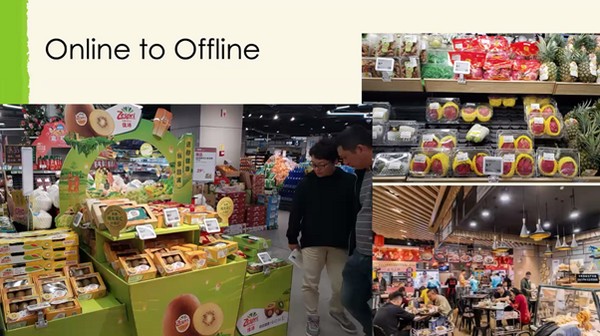 Dan summarized 3 key trends in the fresh produce retail sector in China. “Firstly, E-commerce is driving growth, particularly home delivery services. Many orders are being made and paid for online through apps. Secondly, Grocery retail spaces are shrinking, in part to be closer to consumers and satisfy a growing demand for delivery, as well as due to other pressures, such as rising lease costs and increased competition. Thirdly, most foreign grocery retailers that formerly operated in the China market have sold out the majority of  their China operations to Chinese companies, with foreign retailers slow to adapt to the fast-evolving market and domestic retailers and e-commerce companies eager to expand their scale while investing in well-known foreign brands.”

“The Covid-19 pandemic accelerated a shift toward online sales of fresh goods in China. And much of the pandemic-induced increase in users and spending persisted even after the country emerged from lockdown and day-to-day life returned to normal. With the E-commerce trend, we can easily find fruits in stores that are sold in pre-packaged packages with a standard weight and standard price. Fruits are often ready to be picked and bagged in order to facilitate online ordering and home delivery. In addition, E-commerce channels provide more sales and promotional opportunities.” Dan explains. 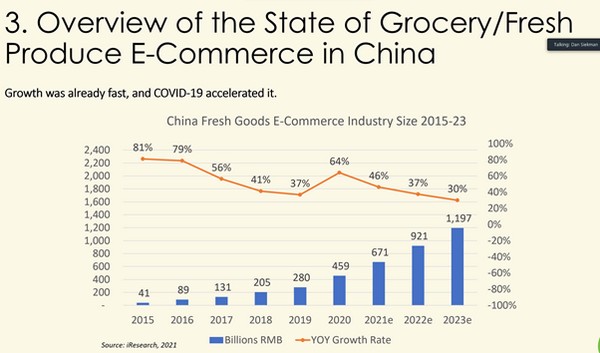 In the second part of the session, Mabel Zhuang, China market development representative PMA, gave a speech on “China grocery retail models.” She started with an introduction on the top 6 of China’s biggest grocery retailers, and their business relevance.

Then Mabel introduced 5 models of Grocery and fresh produce E-commerce in China. “The first model is the traditional E-commerce Model such as Taobao and Tmall, Traditional e-commerce involves fulfillment from either a single warehouse or a small number of warehouses to consumers around the country via express courier service. The second model is New Retail. This is a relatively new term popularized by Alibaba founder Jack Ma to describe forms of retail in which online and offline elements are blended.

The third model is Platform-based grocery delivery such as JD Home, Dmall or Meituan. Under this model, an e-commerce company builds a digital platform upon which suppliers can open virtual storefronts and list their product inventories.

The fourth model is Online-to-offline (O2O), which is a term coined in China that signifies a retail experience where different online and offline components are tightly integrated and centralized under a single brand.

The fifth model is Forward warehouse-based grocery delivery, which is similar to the O2O model described above but eschews the use of in-person retail stores in favor of a network of small fulfillment centers dedicated exclusively to grocery home delivery for customers within a few kilometers. The sixth model is the Community pickup station model, which is the fastest-growing model of grocery e-commerce in China lately is often called the Community group buying’ model in Chinese.” 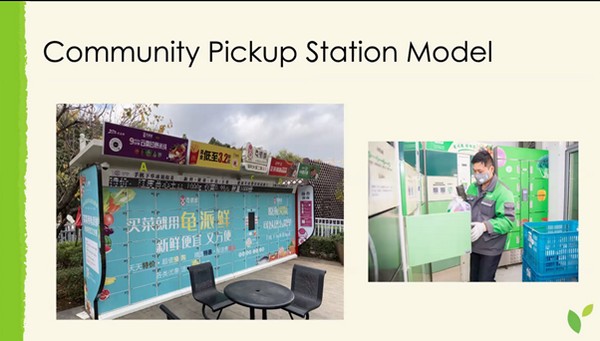 Mabel said, in summary, that traditional e-commerce is maintaining the status quo. Nowadays delivery is a must for retailers to offer, and there are different styles of delivery. Many players offer more than one type of service. The fresh produce sector is a highly competitive and low-profit environment.

The last part of the session is the questions round. The Bake from Pagoda, Landon Yu from Xianfeng, and Kevin from Fruitday introduced their business models and answered the questions of viewers.