Tomatoes under full-spectrum LEDs give better yield and shorter stems

Since the 19th century, many factors of greenhouse cultivation have been solved in The Netherlands, due in part to the leadership of Wageningen, a well-known agricultural sciences university and research center. This is why scientists at Fluence by OSRAM are collaborating with Wageningen to explore the use of full-spectrum LEDs as supplemental lighting in greenhouses. Legacy HID technologies have been used to much commercial success for decades but have also equated into high operational expenditure costs. The relatively recent introduction of narrow-band LEDs into horticulture has introduced efficiencies into the industry, and the effects of each band of spectrum are being researched and leveraged commercially, but a solid base of foundational research around the effects of a full compilation of spectra is still lacking in scientific literature.

The experiment
Results from a two-factor experiment, comparing the influence of light quality and temperature on two common tomato cultivars (Tomagino and Merlice) analyzed at Wageningen, in collaboration with Fluence and Vortus bv (a greenhouse consulting firm), has produced promising results which prove the viability of full spectrum LEDs in greenhouses (see figure 1). The experiment, which considered temperature, light quality of PhysioSpec Greenhouse (table 1), HPS and an experimental spectrum, has produced data which shows a  difference in yield. 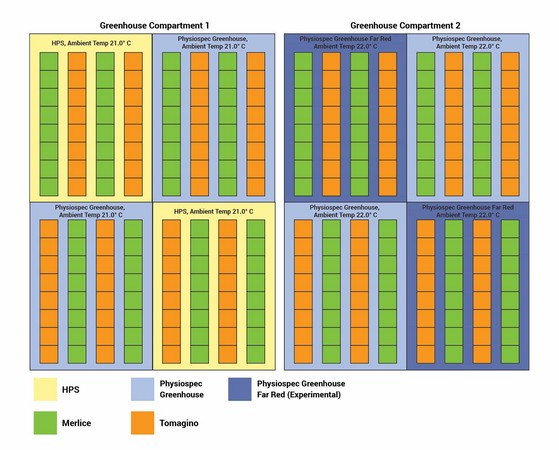 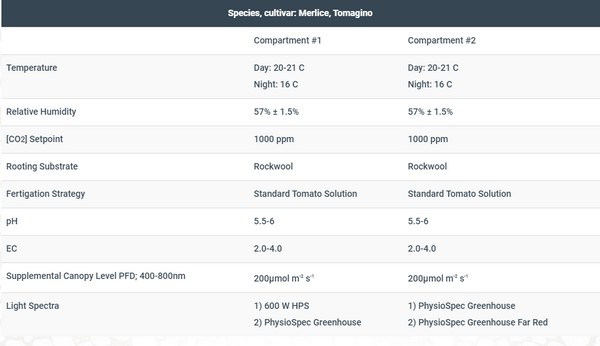 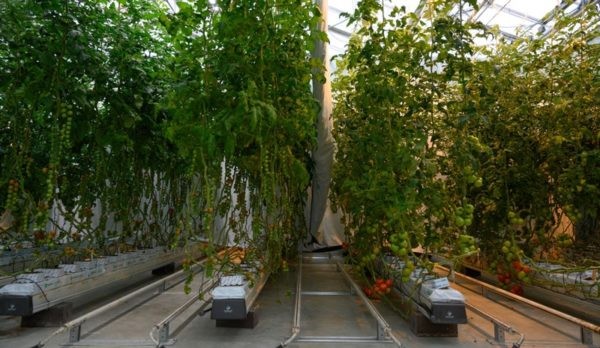 Research chambers at Wageningen University with Fluence supplemental light (VYPR Series) on the left and HPS on the right.

Analysis
The research at Wageningen shows promise for the viability of LEDs in terms of yield, with the added benefit of being more energy-efficient than legacy lighting solutions common to greenhouse production today. “The initial results of this trial show growers can cultivate tomatoes as effectively with PhysioSpec Greenhouse as you can under HPS, possibly with a better yield, and with shorter stems,” said Dr. Ep Heuvelink, associate professor, WUR.

Additionally, the director of Vortus, Barend Löbker, said “Current practices use HPS technology as the sole source for supplemental lighting in greenhouses and the WUR trial proves this should not be the case. Growers have been reluctant to transition to LEDs because they are uncertain if LEDs can be as effective for cultivation and the WUR trial eliminates any doubts around the capabilities of full-spectrum LEDs.”

Further research with Wageningen
Fluence plans to continue to work with Wageningen to compare ongoing research with this trial and conduct more research around full-spectrum and narrowband LEDs, as well as additional types of crops. Our senior photobiologist, Haris Ouzounis, will oversee these studies with Wageningen and has stated, “Upcoming studies from Fluence into the influences of light quality, distribution, and intensity, as well as optimizations to the rest of the environment, should demonstrate improvements in productivity compared to legacy production practices.”