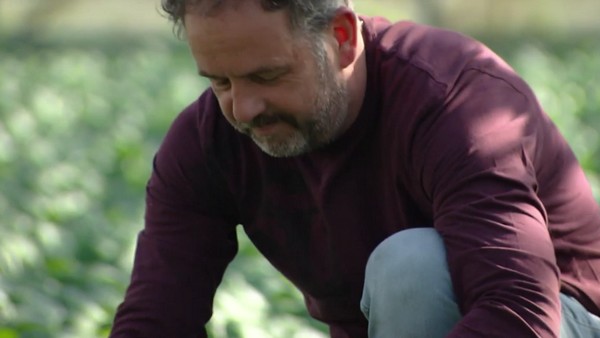 An image from that TV broadcast.

In the program, culinary expert Alain Caron also had a look at Gert's cucumber crop. The organic grower alternates leafy crop cultivation with (snack) cucumbers. The organic cucumber season's already well underway in the Netherlands. "The market's currently difficult," says Gert, who's affiliated with Nautilus Organic. "Spain's still very much on it at the moment. But that'll be over soon."

The last batches of lettuce are also going out. Gert will start planting pak choi again in September. "Then we can harvest again in November. Let's hope viewers will still remember this program by then," laughs Gert.

The global pandemic has had little effect on that. Though, for a short time last year, people were stockpiling plenty of organic pak choi. "We do get requests from the retail sector. But not yet on a structural basis. So, you can't yet organize your cultivation plan accordingly. We already do so with cucumbers," concludes Gert.