They often use organic crop protection in the horticultural sector, as was concluded after a recent digital crop protection test. The results of the tests with products that are already on the market and those that are still to come are looking promising.

However, it remains important to use the products correctly, especially when a product begins to show different effects than previously expected. The nine producers that Royal Brinkman invited to talk about the tests they had done in collaboration with Vertify all talked about how their products would work best.

Start early
If a grower can use a product effectively, then a lot of things are possible. For instance, a cucumber grower using a new fungicide might save enough money on 10 hectares to buy a new car. However, in that case, it is important to apply the product, Prestop from ECOstyle, to the leaves in the early stages of the cultivation to counter the Mycosphaerella in the cucumbers Aukje Veldstra tells the growers on behave of the producer. 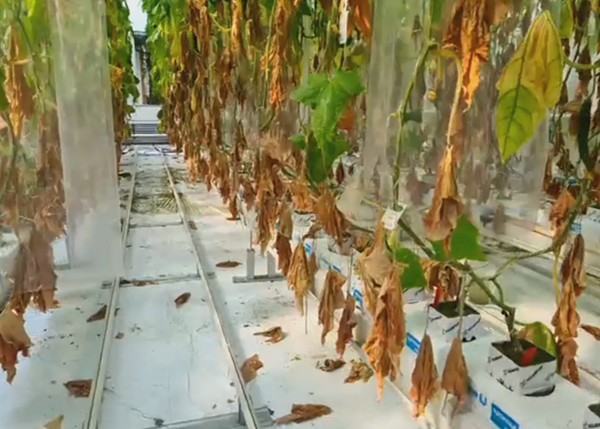 Photo from the test with Prestop in cucumbers. Shown here, the untreated section, which the growers rather not see happen in their greenhouse.

Excipients
To ensure the optimum use of crop protection products, an increasing amount of excipients is used, which is why Dorus Rijkers of Nufarm seized the opportunity to take a closer look at these excipients.

Roughly speaking, there are two varieties: substances with an adhesive effect that cause a spraying liquid to firmly attach to the leaf and spreaders, which are divided into oil-based and silicone-based varieties. Generally, the absorption is better with oil-based products, while the silicone-based products have greater spreading abilities.

This is important to know in cases where a crop protection product on its own is already strong enough to penetrate the outer layers of the leaf. In those cases, using oil-based products can prove to be too much. In conclusion: the amount used needs to be measured precisely, but if the instructions are being followed, a ‘good’ product can actually be a ‘great product, leading to a reduction in costs.

Aiming for the bottom
The products that were presented have a contact effect, which makes the spraying technique used extra important. For instance, spider mites, as is known, can often be found on the bottom of the leaf, so you have to make sure to aim for that surface as well when spraying. Another precondition when it comes to cultivation can be temperature. There are some types of ‘good’ fungi that, for instance, are used as a countermeasure to plant lice but only germinate on the insects at temperatures of over 20 degrees Celsius, which is an important detail to know.

Products strengthen each other
Meanwhile, producers often develop multiple products simultaneously, which can even strengthen each other, says Jan Hulst of Bayer about a test with Batavia to counter cotton aphid in cucumber cultivation. Last year, the product was authorized for use in cucumber cultivation and works with a bilateral systemic, which means the product flows upwards along with the plant's sap and down again. According to Jan, this is a unique trait and leads to a ‘great redistribution’ of the product in the plant.

But it can always be better, for instance, by combining Batavia, which does not have any contact effects, with Requim or Flipper. Using those products, contact effects are allowing the active substance to get absorbed better by the plant. At the same time, the often difficult to handle bottom of the leaf is included in combating the lice due to the systemic action caused by Batavia.

During his test with tomatoes and the biorational Vintec, which is based on these good fungi, Jos Tielen of Belchim pointed out that it is best to have some time between applying the Vintect and applying, for instance, a fungicide. If growers keep this in mind, among other things, then the biorational can achieve optimal effectiveness, and the cuts will look like the ones in the picture on the right (and not the one on the left).

MRLs
And then there are the maximum residue limits (MRLs) that producers also pay close attention to, which is why, according to Mark Selman, a new product to counter the whitefly in the tomatoes present in the pipeline BASF has a ‘very soft formula’. Because of this, it is expected that growers can use the product up to 73 times a year. There are no MRLs and no safety terms attached. Due to this, it is an easy product to use for growers.

Easy to use should sound very appealing to most growers as more and more products are no longer getting used while the amount of bacteria, fungi, viruses, and pests shows no sign of decreasing.

Renew spraying license
Finally, one important detail: to use the products, the growers must have a valid spraying license. To get one of those, they need to be given a certain amount of points (following the rules, the recent webinar was not included for the distribution of points).

Growers need to renew their licenses. Due to corona, a leniency arrangement was applied, but as of the 30th of April, this arrangement is no longer in effect. Growers will again need to renew their licenses. For more information, you can go to the Bureau Erkenningen. Those who wish to learn more about the webinar and the participating producers can watch back the webinar here.