Various beetle species have gobbled through grain stores and weakened food production worldwide since ancient times. Now, researchers at the University of Copenhagen have discovered a better way of targeting and eliminating these teeny pests. Instead of using toxic pesticides that damage biodiversity, the environment, and human health, the researchers seek to exploit beetles’ greatest strength against them — their precisely regulated mechanism of balancing fluids.

Up to 25 percent of global food production is lost annually due to insects, primarily beetles. For the past 500 million years, beetles have successfully spread and adapted to life around the globe and now account for one of every five animal species on Earth. Yet as far back as ancient Egypt, these tough little bugs have invaded granaries and vexed humans by destroying crops. 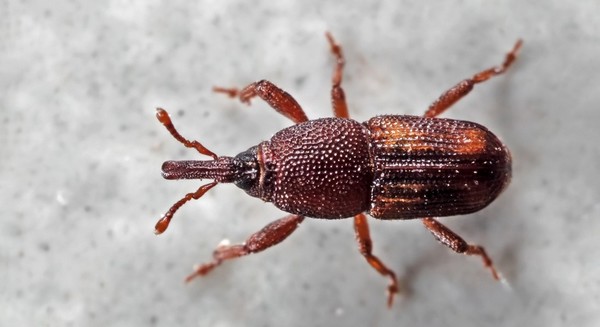 Wheat weevils, confused flour beetles, Colorado potato beetles and other types of beetles and insects make their ways into up to 25 percent of the global food supply. Photo: Getty

As a result, food production and abundant use of pesticides now go hand in hand. A large share of these pesticides damage biodiversity, the environment, and human health. As various pesticides are phased out, new solutions are required to target and eradicate pests without harming humans or beneficial insects like bees.

This is precisely what researchers from the University of Copenhagen’s Department of Biology are working on. As part of a broader effort to develop more “ecological” methods of combatting harmful insects in the near future, researchers have discovered which hormones regulate urine formation in the kidneys of beetles.

“Knowing which hormones regulate urine formation opens up the development of compounds similar to beetle hormones that, for example, can cause beetles to form so much urine that they die of dehydration,” explains Associate Professor Kenneth Veland Halberg of the University of Copenhagen’s Department of Biology. He adds:

“While it may seem slightly vicious, there’s nothing new in us trying to vanquish pests that destroy food production. We’re simply trying to do it in a smarter, more targeted manner that takes the surrounding environment into greater account than traditional pesticides.”

Ancient Egyptians weakened beetles’ water balance using stones
The new study, as well as a previous study, also conducted by Kenneth Veland Halberg, demonstrates that beetles solve the task of regulating their water and salt balance in a fundamentally different way than other insects. This difference in insect biology is an important detail when seeking to combat certain species while leaving their neighbors alone.

“Today’s insecticides go in and paralyze an insect’s nervous system. The problem with this approach is that insect nervous systems are quite similar across species. Using these insecticides leads to the killing of bees and other beneficial field insects, and harms other living organisms,” explains Kenneth Veland Halberg.

The centrality to survival of the carefully controlled water balance of beetles is no secret. In fact, ancient Egyptians already knew to mix pebbles in grain stores to fight these pests. Stones scratched away the waxy outer layer of beetles’ exoskeletons which serves to minimize fluid evaporation.

“Never mind that they chipped an occasional tooth on the pebbles, the Egyptians could see that the scratches killed some of the beetles due to the fluid loss caused by damage to the waxy layer. However, they lacked the physiological knowledge that we have now,” says Kenneth Veland Halberg.

One-hundred billion dollars of pesticides used worldwide
Pesticides have replaced pebbles. And, their global use is now valued at roughly 100 billion dollars annually. But as rules for pesticide use become stricter, farmers are left with fewer options to fight pests.

“The incentive to develop compounds which target and eradicate pests is huge. Food production is critically dependent on pesticides. In Europe alone, it is estimated that food production would decline by 50 percent without pesticide use. With just a single, more targeted product on the market, there would almost immediately be immense gains for both wildlife and humans,” states Kenneth Veland Halberg.

But the development of new compounds to combat beetles requires, among other things, that chemists design a new molecule that resembles beetle hormones. At the same time, this compound must be able to enter beetles, either through their exoskeletons or by their feeding upon it.

“Understanding urine formation in beetles is an important step in developing more targeted and environmentally-friendly pest controls for the future. We are now in the process of involving protein chemistry specialists who can help us design an artificial insect hormone. But there is still a fair bit of work ahead before any new form of pest control sees the light of day,” concludes Associate Professor Kenneth Veland Halberg.

Read the complete research at www.pnas.org.